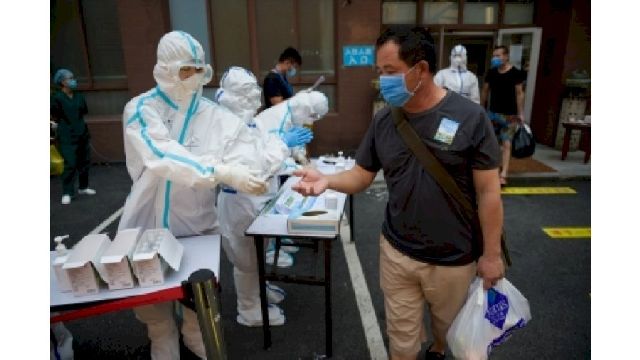 ‘Hospitals across Britain must prepare for Covid surge’

London: Hospitals across the UK are being told to prepare to face the same Covid pressures as the NHS in London and south-east England.

Case numbers were “mild” compared with where he expected them to be next week, he said, with doctors “really worried”, the BBC reported.

It comes as a further 57,725 people have tested positive for Covid – a new daily high.

Another 445 deaths, of people who had tested positive within the previous 28 days, were reported on Saturday – bringing the total number of deaths to 74,570, according to government figures.

The UK-wide total for people in hospital with Covid has already passed the spring peak.

Half of the major hospital trusts in England are said to be dealing with more Covid-19 patients than at the worst point of the first wave in April, with the NHS facing its “busiest winter ever”.

Prof Goddard, of the Royal College of Physicians, told BBC Breakfast: “There’s no doubt that Christmas is going to have a big impact, the new variant is also going to have a big impact, we know that is more infectious, more transmissible, so I think the large numbers that we’re seeing in the South East, in London, in south Wales, is now going to be reflected over the next month, two months even, over the rest of the country.”

He said: “It seems very likely that we are going to see more and more cases, wherever people work in the UK, and we need to be prepared for that.”

Pressure has been so great on hospitals in London and south-east England that some patients have been moved out of the area.

London’s weekly rate of coronavirus cases is 858 per 100,000 people, double the UK figure.

Dominic Harrison, director of public health for Blackburn and Darwen, said a decision on a new lockdown had to be decided “in the next week” – instead of waiting for the North to get to the same rates as the capital “and ‘call it late’ which has been our pattern of response too often”.

The most recent UK-wide statistics, from December 28, showed there were 23,823 people in hospital with Covid. That was already significantly higher than the spring peak, which saw 21,683 in hospital on April 12.

Only English hospitals have released figures for the final three days of December – and these show that a further 2,302 Covid patients were occupying hospital beds on 31 December.

London’s Nightingale emergency hospital is ready to admit patients, the NHS has said, while other sites currently not in use are being readied.