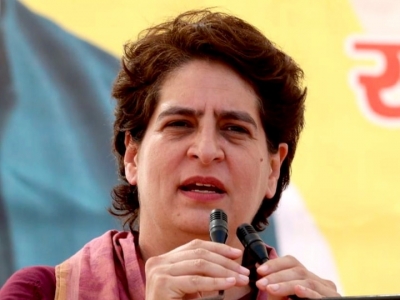 How Priyanka has gone wrong in Uttar Pradesh

As the party graph gradually slipped down in UP, party workers sincerely believed that it was the charisma of Priyanka Gandhi that alone could salvage the situation for the party.

Priyanka’s arrival in Uttar Pradesh in 2019, expectedly, unleashed euphoria as she held meetings that continued till the wee hours, met party workers who arrived in droves and promised to bring back the glory days of the party.

As the weeks rolled by and the Congress suffered a humiliating defeat in Amethi in the Lok Sabha elections, things began changing.

The then UP Congress president Raj Babbar put in his papers, Priyanka shut her doors to veterans, Ajay Kumar Lallu became the new UPCC president and finally Priyanka Gandhi’s coterie led by her personal secretary Sandeep Singh took over the UP Congress completely.

The arrogance and dominance of Sandeep Singh and his men created a turmoil within the party.

Ten senior Congress leaders were expelled merely because they held a meeting to celebrate Nehru Jayanti on November 14, 2019.

Sonia Gandhi, Rahul Gandhi and Priyanka Gandhi refused to meet the veterans which further emboldened the ’emerging coterie’ within the party.

Being brusque, abusive and arrogant was the new behaviour code.

Expulsions became the order of the day and the young and the old were told to keep away.

Priyanka’s visits to UP were closely guarded by loyalists and no one had any access to the leader.

As the 2022 assembly elections approached, Priyanka launched the ambitious campaign of ‘Ladki hoon lad sakti hoon’ that went completely awry with the party giving tickets to women who were totally undeserving.

They got tickets only because they were women.

Allegations of tickets being sold for a price were also levelled on the social media but the party leadership simply looked away.

A clear divide had developed by now between what is called the ‘Priyanka Congress’ and the ‘Rahul Congress’.

In the 2022 assembly polls, the Congress hit rock bottom by winning just two of the 403 seats and merely 2.3 per cent votes.

In ten seats, the party candidates got less votes than NOTA.

Displeasure against the team that handled the elections is growing by the day and there are almost no leaders even left to be expelled.

It is almost six months since the Congress faced its worst-ever drubbing in the assembly elections and Priyanka Gandhi Vadra has simply stayed away from Lucknow.

Her political activity is restricted to Twitter and her ‘team’ is having a free run in Lucknow.

“Priyanka Gandhi Vadra is not even willing to listen to what party workers have to say. She has not come to Lucknow after the election results were announced and her coterie is happily taking action against anyone who speaks up. I was an AICC member but was expelled by her team even though it is against the rules. If they feel that by expelling dissenters, they will save the Congress, they are mistaken,” says Zeeshan Haider, a senior party leader who recently resigned.

He said that ever since Priyanka Gandhi was appointed general secretary in charge of Uttar Pradesh, around 9,000 party leaders and workers have either left or have been pushed out.

“The Gandhis, it seems, are not willing to address the issues and problems. For them it does not matter that the party is almost over. The Congress president neither replies to our letters and nor does she agree to meet us,” he added.

Another former Congress MP, who spoke to IANS on condition of anonymity, said, “Priyanka Gandhi Vadra should have called meetings of candidates and senior leaders to discuss the reasons for the debacle. We are about a year and a half away from the Lok Sabha elections and if this head-in-the-sand attitude continues, the Congress will be relegated to the dustbin of history.”

Another veteran leader said, “Just like a child gets tired of an old toy, Priyanka Gandhi seems to have lost interest in UP politics. She is directly responsible for the demolition of Congress in UP, taking the party away from power in Punjab and it was her insistence on Imran Pratapgarhi’s candidature for Rajya Sabha in Maharashtra that dismantled the Thackeray government there. We are now watching what happens in Himachal Pradesh where Priyanka has considerable interests.”

According to senior party leaders, the problem with Priyanka is that she refuses to interact with party workers and depends solely on whatever feedback she receives from her coterie.

“She is not a people’s leader but a leader of only her team. The magic has waned and the Congress will have to rebuild itself from scratch now,” said a party leader.

The state unit is also in a state of limbo after Uttar Pradesh Congress Committee president Ajay Kumar Lallu was asked to resign in March. The party remains completely headless and directionless.

“It is a free-for-all situation here. None of the party leaders visit the party office and there is no political activity happening after the polls,” said an employee at the UPCC office.