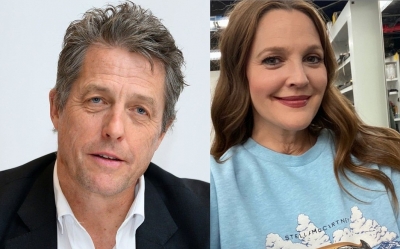 Hugh Grant, Drew Barrymore on their surprise kiss years ago

Los Angeles: Actors Hugh Grant and Drew Barrymore have opened up about the surprise kiss they shared years ago.

Barrymore said: “One of the moments that I had the most moxie, and I don’t think we’ve ever talked about this, I walked into I think it was like The Waverly Inn, this was years ago, and I had a few drinks. And I walked in and I ran into you and instead of saying hello I grabbed you by the collar and I fully started kissing you.”

Grant replied: “Yes, I remember that.”

The actress went on to say: “Can I do you of what I saw, you went — the expression was — you’ve never greeted me that way before, and then you had a second thought and you were like, ‘You know I’m not hating this’. And then we flirted and then it was like, ‘Okay, bye. See you soon’.”

Grant tagged it as “bizarre”.

“It was really bizarre. I was very drunk as well and I was with some very nice but not drunk studio executives from LA, and they were very surprised. Someone said, ‘Oh there is Drew Barrymore’, I get up to say hi and then we make out for 10 minutes and then I sit down, and we go on talking about the script.”

The two stars spoke of the incident on Barrymore’s talk show “The Drew Barrymore Show”, which airs on Zee Cafe in India.