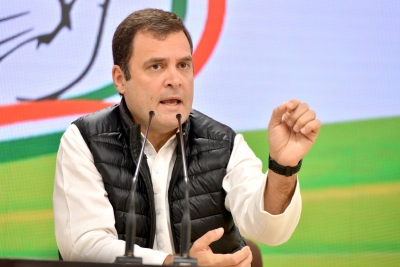 Tumakuru: Congress leader Rahul Gandhi, leading the 150-day Bharat Jodo yatra, said on Saturday that he believes in ‘tapasya’ and that he wants an element of suffering while interacting with the people.

Addressing mediapersons in Turuvekere town on the sidelines of the march, Rahul Gandhi stated that not just him, his entire family believes in the concept of ‘tapasya’.

He was responding to questions on how the rally has changed him as a person. “Along this padyatra, communication with people, I wanted an element of suffering for myself.

“I didn’t want the march to be easy. I was wanting to do something which would make me suffer. While I am talking to my people, I can share my sufferings. That was the idea.

“So, I find that to be a very powerful experience. When you are walking on the road and speaking to your people, after suffering, the communication is better.

“For me, it’s been a learning experience. It began 31 days ago but for me the learning has not yet begun. I can already see the advantages of this type of communication,” Rahul Gandhi explained.

“Also, the interaction with people is the most beautiful part of the journey. But unfortunately, things I say get distorted. When I am speaking in front of cameras, those behind it distort my words.

“There is tremendous wisdom among our people but it gets wasted by the kind of politics we are running. They have a lot to say but are unable because of the political system. I am also getting a huge amount of support, I don’t mean by numbers but from individuals whom I interact with,” he added.