Home Mangalorean News Local News I have no interest in Replying to Mithun Rai’s Statement – Shobha... 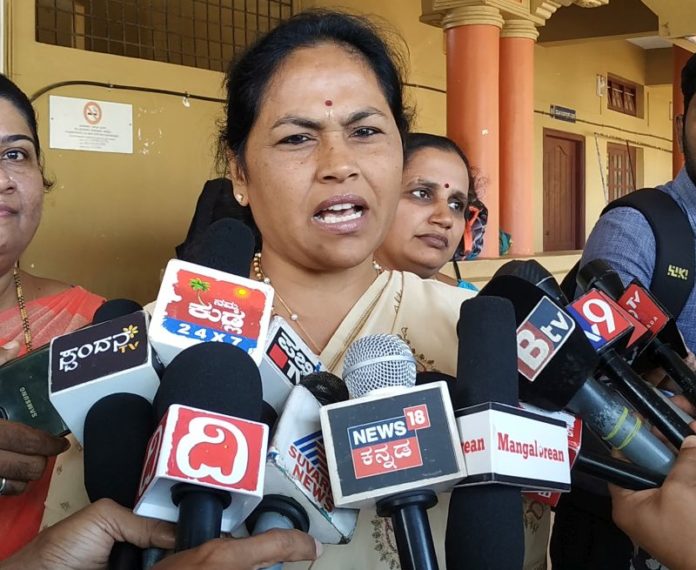 Udupi: “Mithun Rai is a cheap person, I have no interest to reply to his statement,” said Union minister and Udupi-Chikkamagaluru MP Shobha Karandlaje to the media persons in Udupi on September 30.

Addressing the media persons Shobha said, “Those who are interested to take a selfie with me, let them come and take a selfie, but I will not respond to Mithun Rai’s statement. Why should I respond to his nonsense statements? she questioned.

Two days ago Udupi Block Congress held a protest from Kalmady church to Karavali Bypass to demand the repair of the National Highway and other prominent roads in Udupi and to highlight the inaction of Udupi CMC as well as the Union and state governments. During the protest, Youth Congress leader Mithun Rai had asked people to click a selfie with the Udupi MP Shobha Karandlaje if she is spotted in Udupi, Kaup and Kundapur between October 7 to 14. The first five people who send photos would get a cash prize of Rs 5000 each, he said and added that if Shobha does not arrive even after that, a missing person’s complaint would be lodged and posters would be pasted seeking to trace the MP.

PFI is the biggest anti-national group involved in carrying out terror-supporting activities. The minister told reporters that NIA has been investigating PFI activities for the past three years and that the evidence gathered resulted in banning  of the PFI and its allied organisations.

As SDPI is a political entity, the election commission can take action against it. An investigation is being conducted into PFI activists who are the members of the SDPI, she said.

Shobha said that Home Ministry has directed deputy commissioners to seize assets of the PFI activists.

She claimed that PFI activists were trained to make bombs and use social media to carry out illegal activities. The arrest of the three engineers in Shivamogga had further exposed the activities of PFI.

The primary goal of the PFI was to weaken the country, she declared. Shobha lashed out at Congress and declared the party as a ship without a captain. “It is on the verge of sinking,” she said.