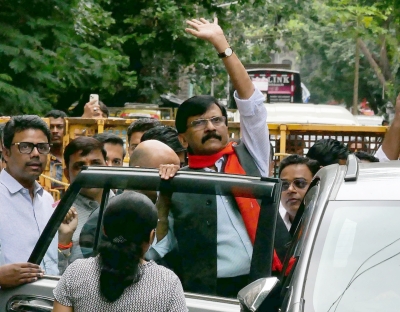 ‘I will definitely return’: Sanjay Raut’s touching note to Mom

Mumbai: Shiv Sena MP Sanjay Raut – currently in custody – recently penned a touching letter to his “Priy Aai” (Dear Mother) in which he displayed his fighting spirit and promised to “return” and re-join her.

The letter, released by him on social media, was penned by him on August 8, sitting on a bench outside the court when he was sent to judicial custody – a week after his arrest on August 1 by the Enforcement Directorate (ED).

He recalled how his Mom – Savita R. Raut – had sat stoically near a photo of the Shiv Sena founder, the late Balasaheb Thackeray at their home, when the ED team raided their home (July 31), and how she finally lost composure and broke down when the sleuths took him away that evening.

“You gently rebuked me… started crying… I heard your cries above the roar of hundreds of Shiv Sainiks raising slogans outside, came outside and waved to them, told me to ‘come back soon’, and kept your hand raised till the (ED) car went out,” Raut said.

Vowing to come back, he said that thousands of jawans guard the borders for months before going home, some never return, and “wars are like this”.

“Even I am fighting against injustice, I will never bow before the enemies of Shiv Sena, meaning Maharashtra, that’s why I must remain away from you… Haven’t I learnt this from you,” Raut asked.

The Sena MP referred to the revolts and exits of Chhagan Bhujbal and later Narayan Rane and four months ago, Eknath Shinde, and said “it was you who wondered why these people left, what did they not get (in Shiv Sena) and do anything but save the party”.

Raut said that in order to save the party, a struggle was necessary and as taught by Mom, he committed to never “betray the Shiv Sena or Balasaheb Thackeray”.