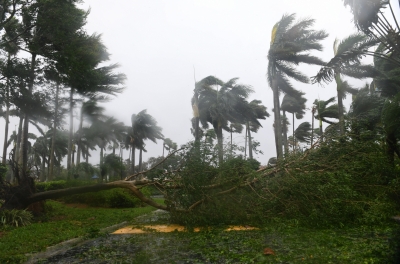 The US National Hurricane Center in its latest advisory on Thursday said that Ian is taking aim at the states of South Carolina, North Carolina, and Georgia with life-threatening flooding, storm surge, and strong winds, Xinhua news agency reported.

Forecasters said the storm will approach the coast of South Carolina on Friday and the center will move farther inland across the Carolinas on Friday night and Saturday.

With maximum sustained winds of 120 km per hour, Ian could slightly strengthen before landfall on Friday and is forecast to rapidly weaken over the southeastern US late Friday into Saturday.

Ian made landfall in southwest Florida as a Category 4 hurricane on Wednesday afternoon, bringing catastrophic storm surges, heavy rains and destructive winds, and dangerous flooding to both coast and inland areas.

In southwest and central Florida, at least 15 people have been reported dead due to the storm, according to CNN.

US President Joe Biden said on Thursday that Ian “could be the deadliest hurricane in Florida’s history”.

“The numbers are still unclear,” Biden said during a visit to Federal Emergency Management Agency headquarters in Washington, D.C. “But we’re hearing early reports of what may be substantial loss of life.”

As of Thursday evening, nearly 2.5 million customers were without power in Florida, according to PowerOutage.us.