Home Agency News If there is any party Bangla in true sense, it is BJP:... 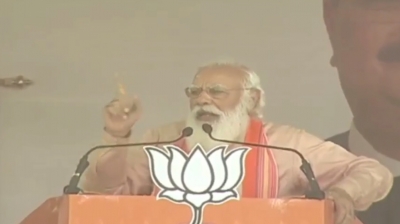 If there is any party Bangla in true sense, it is BJP: Modi

Kolkata: Countering West Bengal Chief Minister Mamata Banerjee’s sustained attacks at the Bharatiya Janata Party (BJP) dubbing it an ‘outsider party’, Prime Minister Narendra Modi addressing a massive public rally on Saturday in West Midnapore’s Kharagpur said, “if there is a Bengal party in the true sense, then it is the BJP”.

“The father of the Jana Sangh was the son of this Bengal. The BJP’s DNA has the ethics, thoughts and values of Ashutosh Mukherjee and Dr Shyama Prasad Mukherjee. With these features, we want to take Bengal to the next level in terms of development and make the future bright for the people of the state,” Modi said.

Urging people to vote for the saffron camp, he said that the people of West Bengal have seen the political regimes of all other parties in Bengal, except for the BJP.

People gave an opportunity of 10 years to Mamata to bring development in the state. But she gave them 10 years of “plunder, corruption and misrule”.

“Just give us one chance to come to power in Bengal for 5 years. I promise you that the BJP will work towards the direction of making the state a ‘Sonar Bangla’ (Golden Bengal), the region which has been lagging behind almost for 70-years… The BJP will bring a change to the destruction caused by these parties in last 70 years in the state…

“Arrey Didi, Bengal gave you 10-years for governance… We not only want to bloom lotus in Bengal but also want to make the future of the people of Bengal bright,” he pointed out.

The Prime Minister said that last night, WhatsApp, Facebook and Instagram were down for 50-55 minutes which left everyone worried.

“But here in Bengal, development, belief and dreams of the young people have been down for 50-55 years,” he said, adding that “Bangal mein isbar BJP sarkar (It will be a BJP government this time in Bengal)”.

He said that people of West Bengal are getting impatient to bring in “ashol poriborton” (real change) to Bengal.

Braving scorching sun, thousands of people came to attend PM Modi’s rally on Saturday at Kharagpur. Armed with banners and placards, people were also seen sloganeering in favour of Modi ahead of the Prime Minister’s address at the rally.

Modi recalled the names of revolutions that started from West Midnapore and bowed to the land saying he is “fortunate” to address such a huge rally at Kharagpur.

“I am proud that we have a party state unit president like Dilip Ghosh who took the organisation to such a height despite regular attacks by Mamata Banerjee’s party. He never refrained from working for the betterment of West Bengal,” Modi said.

Harping on the theory of “double-engine government” PM Modi said that wherever there are BJP governments in the states, the Central and BJP-led state governments are engaged in the services towards the people with “the power of a double engine”.

“We are working with the mantra of ‘Sabka Saath, Sabka Vikas and Sabka Vishwas’,” he said.

Modi said that if the BJP government comes to power in the state — agriculture, irrigation and cold storage facilities will be made better. This will benefit the potato farmers in the region.

“Improvement drives would be carried out in areas of healthcare, drinking water facilities and rural roads too. We’re committed to all-round development,” he said.