Home Mangalorean News Local News I’ll Rather Feed A Stray Dog Which Will Remember You, Than a... 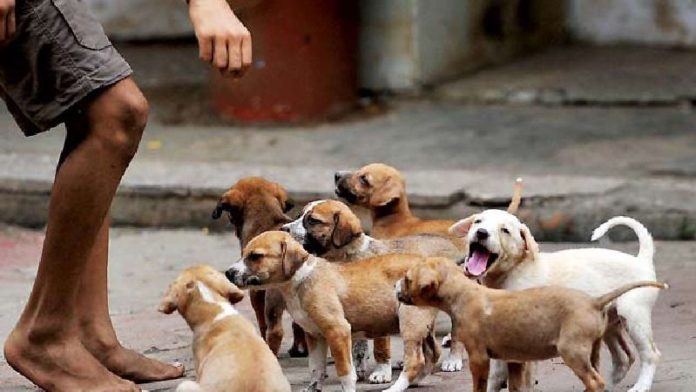 I’ll Rather Feed A Stray Dog Which Will Remember You, Than a Stray Man Who’ll Ignore You?

Mangaluru : Yesterday I received a whatsapp message where a pigeon visits a man in a hospital somewhere in Iran, since he apparently gets no other visitors including his family members and relatives. This is indeed a Big heart for a bird brain. And the hospital nurse who clicked this picture says that the man used to feed Birds in a Park. When one is unluckily enough to be admitted to hospital, family members and friends are almost sure to visit. However, in this case, a little pigeon visited an elderly man in hospital to give him some company, twice or thrice a week.

The lone pigeon has apparently made return visits to the man, which a nurse said doesn’t receive any other visitors. This friendly Pigeon perches on man’s lap as he’s resting, and this viral picture apparently comes from a hospital in Iran.. which was posted by the nurse, and has already received millions of hits. The nurse caring for the elderly man said that no one came to visit him. Instead, a pigeon would fly in and pay the man a visit, waiting for a while before taking its leave. It could be seen perching on the man’s lap while he is lying down, almost as if it’s keeping watch over him. 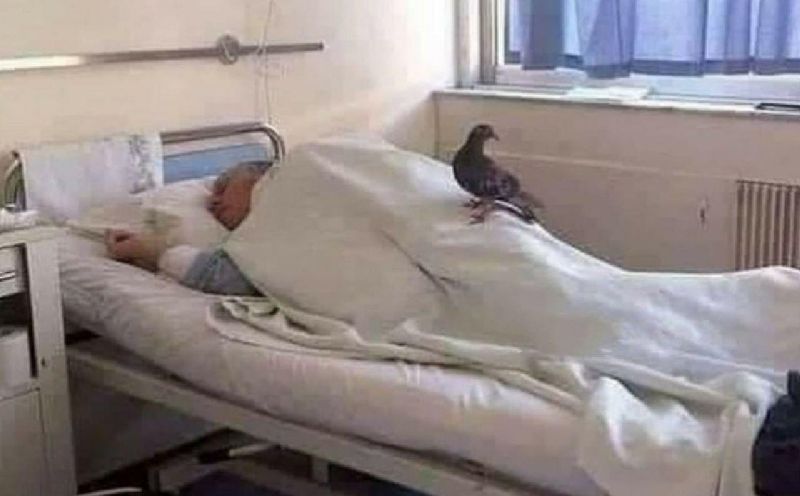 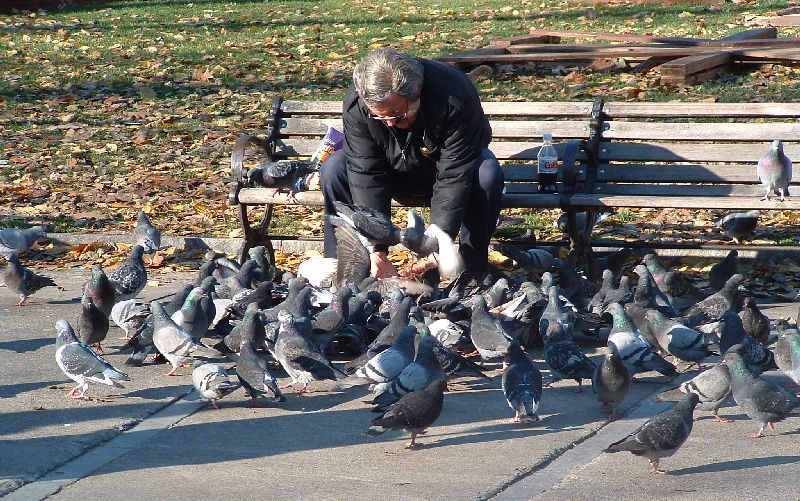 Picture for illustration only

Apparently, the man told the nurse who took this picture that he’d feed birds in a nearby park. Sources reveal that the nurse who took this photo said “This elderly patient was admitted to the hospital three days ago and during those three days no family members came to visit or take care of him. The pigeon came twice and stayed in his bed for a long time. Later it was learned that he always fed the pigeon when he was sitting on the bench in the park near the hospital.“. This story brought back my experience feeding the homeless, destitute, needy with food and water during the lockdown, and simultaneously I was also feeding the hungry stray dogs- the only difference I find these days is that the four-legged stray dogs still remember and come running towards me whenever they see me, while the two-legged human beings whom I was a Good Samaritan during lockdown days, are ignoring me and act like they don’t even know me. And it’s a fact. 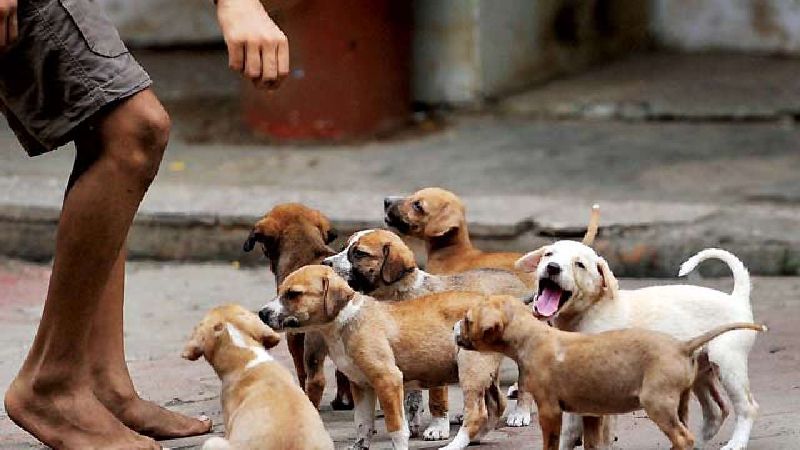 This shows that Animals have more humanity than man himself. I have three dogs, and I tested my dogs so I would know if their unconditional love is in fact, unconditional. My dogs always want praise. Or petting, and they want it quite often. I do not believe they are seeking assurance, they lick me until I am raw where they concentrate. I think they like it when I give them a rub here and there, and just run my hand over them as I walk by. But there is a test for determining their devotion to you. If you do have your dog(s) take this test, give it to them after a fun afternoon., or while doing something especially for their benefit. And the same gesture I show towards a few other street dogs whom I feed them in the morning- and they need my love and in response they jump on you wagging their tails.

And it’s definitely true that “If you feed a stray dog will it be more loyal to you than other people?” At Least most doggies will, but not always. Of course, they will be grateful for the food, but they also have to develop trust and an emotional bond with you to be truly loyal. Which happens easily with the great majority of dogs, who have not had a difficult life or been abused. Most dogs love unconditionally when shown love and affection. Being individuals, though, they may bond closer with other persons in their “pack”, like a family member or caretaker.

If a dog has a genetically suspicious-untrusting nature, or has had bad experiences, and has not had training to alleviate this, they may never fully trust a human. But in my case, all the stray that I fed during lockdown and even now, still show their unconditional love towards me, and not the needy human-beings whom I served during the lockdown. Even though many didn’t wanted food instead wanted alcohol, which I never gave, are showing disrespect when I see or meet them near Town hall or Nehru Maidan

Sure I’ve come to believe that dogs gravitate toward the one who feeds them —stray or not. Dogs, in general, are quite practical. Love and smooches do not trump food to a hungry dog. With a stray, feeding is a good way to start a relationship of some sort. at least over those who DON’T feed him/her. But it’s not necessarily loyalty. It is a necessity to the dog. He/she may only be tolerating your presence at this point. Assuming the dog doesn’t return to its real home (if it has one): Loyalty starts later, after you’ve built up some trust in additional ways. So be quiet and gentle, feed them and you’ll be glad that you did.

There are two particular stray dogs I used to feed near Taj Mahal Cafe in Hampankatta, but for a few weeks after the Smart City work had torn up the place I never went to that restaurant. These two dogs would wait for me daily. Yesterday, I made a visit to Taj Mahal Cafe, but I never expected they would still remember me after several days. I was wrong, these two dogs started jumping on me, that my pants were all red in color, from the feet of the dogs since they are lying in the red mud near the construction site. They came running seeing me on my two-wheeler , showing love ,affection as if both were asking “Where were you so long”. Friendship is from heart and soul..Many relationships in this world arise out of selfishness but animals are showing selflessness and mankind including me, needs to learn. 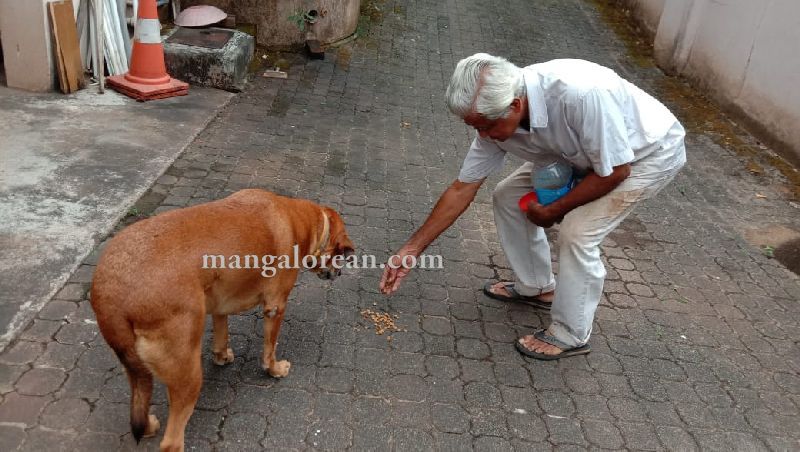 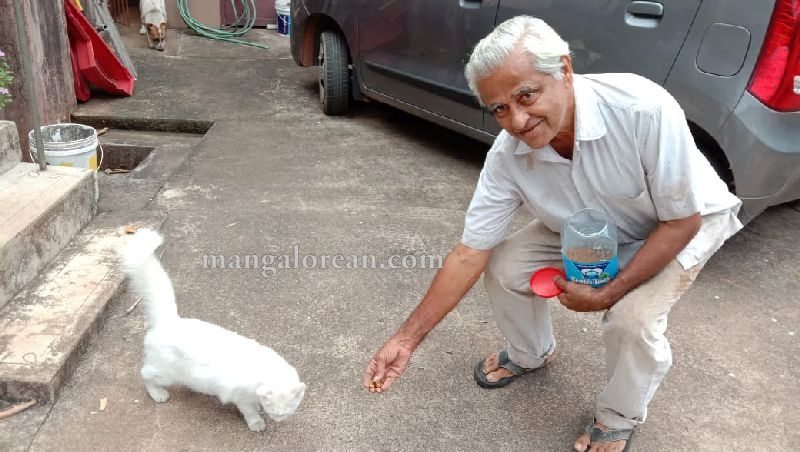 Joe D’souza – a Good Samaritan to Stray Dogs, enjoys daily what he is doing for the furry-ones!

Like Every Elder Brother wants to follow in the footsteps of his younger brother,so is my elder brother Joe, a NRI from US and presently a Social Worker, who also takes care of a bunch of stray dogs daily on his way from Kadri to his farm in Merlapadau, apart from taking care of his two desi dogs at home. When asked what he has to say about his relationship with furry animals, he said, “Alfie, you saw me feeding the dogs, while you clicked the pics. My answer to you is straight forward-You asked me why I feed dogs? Look here for the expression of feelings from the dogs. The dogs will always remember me until their last day in this world- whether it is a stray or house dog. Always remember that when you feed a dog once, and it will always remember you by its wagging tail. You feed a needy human being often, they will slap you once their hands are washed clean. I am saying this with my own experience and with a sad feeling where people I helped do not even remember me anymore. Thanks for allowing me to share my feelings that I have more with stray animals than with stray humans” 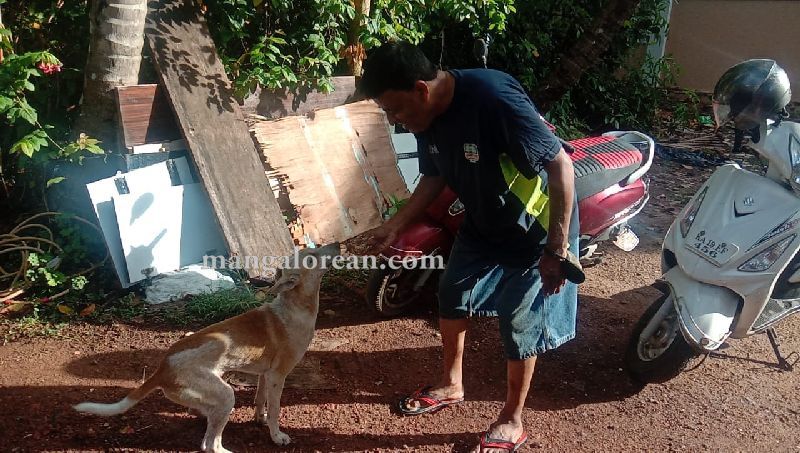 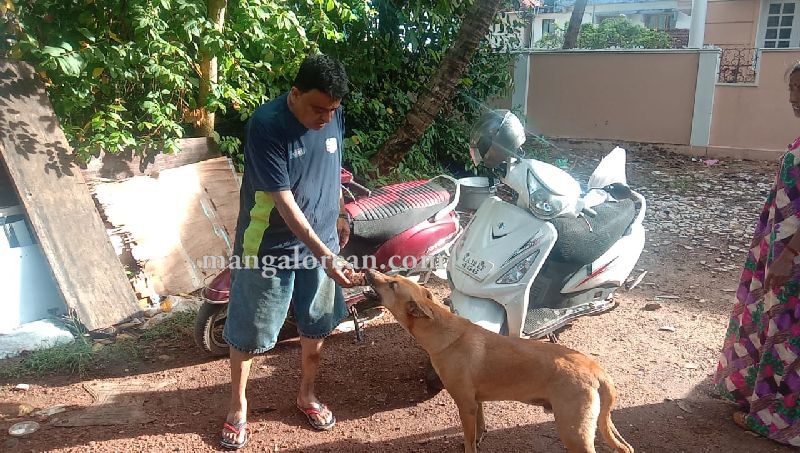 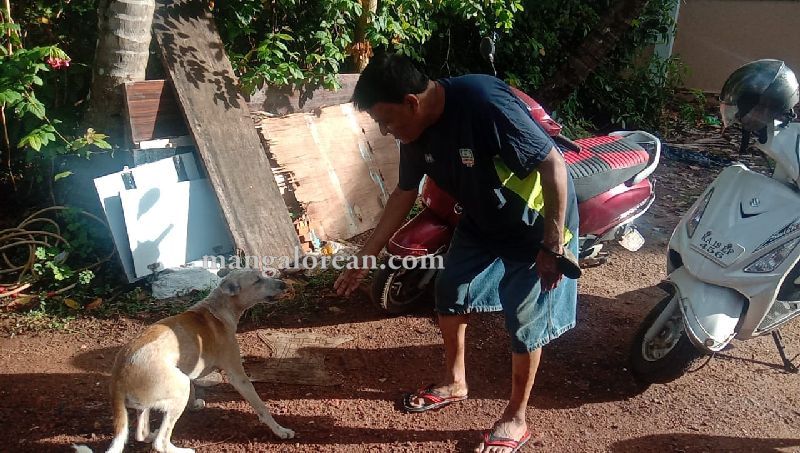 When a dog finds a human who will feed them, they will keep going back as they need food to survive. But, a stray dog leads a dangerous and tenuous life. They can scavenge for food, so the food a person provides is good but only part of their needs. If you want a stray to be loyal, take it in, give it shelter, help it to survive .As you continue to do this, he or she will smell you, your scent in the air and on the ground. They will come to KNOW you with time as we all do, with time. They might even begin to trust you and feel that you are like a friend cause they know a part of you. Yes, absolutely the dog will be loyal to you and will love you unconditionally only if you give him a chance.

After a while the dog will trust and he will stop being afraid of you. He will also want to share his love and affection with you. Dogs and cats are abandoned on the streets and they fend for themselves everyday. Homeless animals are a nuisance to some people, they get abused, injured and killed. They are so relieved when they find someone that cares, they are grateful. Just imagine how abused and abandoned animals feel, they are terrified, alone, starving, unloved, unwanted, there is no hope. If you feed a stray dog or cat, if you offer better cuisine than your neighbors, then you have a new friend! CONGRATS!