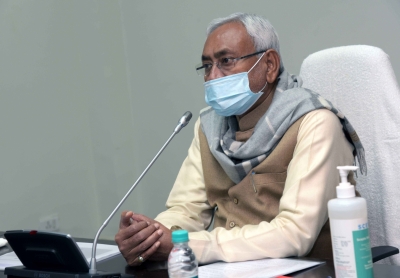 Patna: While Bihar Chief Minister Nitish Kumar was busy in taking a high-level meeting at the secretariat in Patna, one of his dream projects — water connectivity to every house called “Har Ghar Nal Ka Jal” Program — appeared not properly being implemented on ground at several places in the state.

A newly constructed overhead water tank built under “Saat Nishchay” scheme was collapsed within five minutes as a submersible pump was started to fill water in it in Beldhar Bigha village of Gaya district.

The incident has created chaos in the area. Fortunately, no one came under the debris of the tank. The villagers alleged that the contractor had used low-quality material in the construction of this tank.

This was not the first case, similar incidents have also been reported in Khagaria, Nalanda and Nawada districts as well.

This scheme is having a scope of scam and it is appearing from time to time in Bihar. Darbhanga police have also arrested a Ward Secretary and Ward Member in connection of alleged embezzlement of the government funds.

Anmol Mishra, Block Development Officer of Benipur in Darbhanga, had registered a complaint on November 26 after the detection of fraud. He said that the arrest was made after proper investigation by the police.

The Chief Minister on Monday held a high-level meeting on to analyse development projects in Bihar.

He took a review of “Har Ghar Nal Ka Jal” scheme. Besides, he also approved easy road connectivity to every village. As per the plan, he has given direction to the Road Construction Department to connect every village with important places.

An Additional Chief Secretary level officer of the Road Construction Department presented a plan to construct 120 bypass roads in important cities, sub towns and blocks across the state.