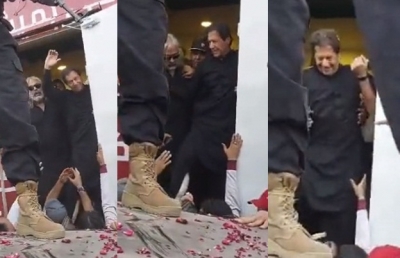 PTI leader Faisal Javed also sustained injuries in the attack, which occurred in Wazirabad. The suspect has been arrested, Express Tribune reported.

Javed said that a PTI worker was killed during the attack, while another was severely injured, as he prayed for the well-being and protection of Khan and everyone else, the report said.

Party leader Fawad Chaudhry also confirmed the ‘targeted attack’ and said that Khan has been shot in the leg. Speaking to a private news channel, he said three people were injured in the attack, including Ahmad Chattha and Faisal Javed.

Party leader Hammad Azhar said PTI’s Ahmed Chattha was shot at twice and is not “out of danger”.

Chaotic scenes broke out near PTI’s reception camp at Allahwala Chowk after gunshots were fired at party chief Imran Khan.

According to PTI leader Imran Ismail, Khan has been shot in the leg “three to four” times, Dawn reported.

Speaking to Bol TV, Ismail said that he was standing next to Khan when the shots were fired in which PTI leader Faisal Javed was also injured.

He added that the attacker was directly in front of the container and was wielding an AK-47, Dawn reported.

According to Geo News, the former Prime Minister has been shifted to a hospital.

PTI leader Shahbaz Gill said, “Imran Khan is our red line and an attempt has been made to cross that red line.”

He also said that Khan will fight till his last breath.

Prime Minister Shehbaz Sharif has condemned the firing incident in Gujranwala and directed Interior Minister Rana Sanaullah to seek an immediate report from the inspector-general of police and chief secretary of Punjab.

Khan is leading PTI’s march towards Islamabad which kicked off from Lahore’s Liberty Chowk on October 29. This is the PTI chief’s second long march this year.

Khan, along with his supporters, is expected to stage a sit-in in Islamabad against the Shehbaz Sharif-led coalition government at the end of the march. PTI has not yet confirmed the date of arrival in Islamabad.

According to Khan, the protest march will continue till the date for elections is announced, The News reported.

The political instability in Pakistan has also fuelled economic uncertainty, with international rating agencies questioning if the current government can maintain difficult economic policies in the face of political pressure and looming elections, The News reported.

The Islamabad High Court (IHC) has directed PTI to ensure peace regardless of the location in Islamabad allotted to the party by the government to hold sit-in and ‘jalsa’.

The observation came during the hearing of PTI’s plea against the government for not issuing the party a no-objection certificate for its sit-in in Islamabad.