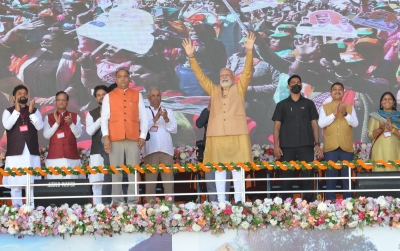 Shimla: With Himachal Pradesh heading to the Assembly polls on November 12, Chief Minister Jai Ram Thakur is leading his campaign with the slogan ‘rivaj badlega’ (electoral traditions will change) as BJP governments have repeated in the recent Uttarakhand, Uttar Pradesh and Haryana polls.

This small hill state has not seen any incumbent party returning to power since 1985. Since then both archrivals — the Congress and the BJP — ruled the state alternatively in eight terms.

This time, the saffron party, with anti-incumbency weighing heavy on its governance, seems to be banking on Prime Minister Narendra Modi’s charisma, instead of flashing its own achievement card.

The Prime Minister held three back-to-back public meetings ahead of the poll announcement.

At every rally, Thakur, the 57-year-old five-time legislator who rose through the ranks, missed no opportunity to remind the public about Modi’s special bond and love for the people of the state where he spent a few years as in-charge of the state’s affairs in the late 1990s.

“Is baar sarkaar nahin, rivaj badlega (This time not the government, but the tradition will change),” a confidant Thakur, the first-time Chief Minister who has been toeing the Modi government’s ‘Sabka Saath, Sabka Vikas’ mantra, told IANS on Saturday before heading to attend Union Minister Amit Shah’s rally in Sirmaur district, the first by the Central leadership after the poll announcement.

Firmly believing that the Prime Minister has always bestowed his blessings on Himachal by offering so many developmental projects in the past five years, Thakur asked the Opposition: What is wrong in seeking votes on the name of the ‘pradhan sevak’ who devoted his life to the welfare of the people and good governance.

Taking a dig at the Congress, Thakur said on one hand it has launched ‘Bharat Jodo Yatra’, and on the other, its senior leaders are following Congress ‘Chhodo Yatra’.

“Under the dynamic leadership of Prime Minister Modi, the present government would again come into power and continue serving the people.”

Listing out achievements of the double-engine government that has given the hill state new infrastructure in every step, Thakur, who is leading the party poll campaign, said the Prime Minister’s vision and commitment to strengthen health services across the country is being showcased again in the state through the inauguration of AIIMS Bilaspur.

“This (Central) government believes in laying the foundation stone of a project and inaugurating itself.”

He thanked the Prime Minister for sanctioning the All India Institute of Medical Sciences (AIIMS) and Bulk Drug Park that will strengthen the state’s health sector and the pharmaceutical hub.

He expressed gratitude of the Prime Minister for inaugurating the IIIT (Indian Institute of Information Technology) Una, flagging off the inaugural run of the Vande Bharat Express from Amb Andaura to New Delhi and for launching the Pradhan Mantri Gram Sadak Yojana-III (PMGSY) scheme.

“More than 39,500-km road network is catering the needs of the people, especially in rural and remote areas, in the state. Out of this road length, about 50 per cent has come up under the ambitious Pradhan Mantri Gram Sadak Yojana. The sanction of Rs 3,200 crore for PMGSY-III will transform the prevailing road infrastructure and will further boost rural economic activities,” the Chief Minister explained.

Going to the polls with the firm belief that the Centre-state unison helps strengthening the spirit of cooperative and competitive federalism, Thakur, who through his stint believes development and no witch hunting, said this is only the BJP government in the Centre that realised the agony and hardships of the people of the state.

“We succeeded to excel in road, health, medical education, education and other developmental sectors, besides the welfare of the poor, downtrodden and the women.

“The previous government spent Rs 400 crore on social security pensions, whereas we are spending Rs 1,300 crore. Nearly 7.50 lakh eligible beneficiaries are presently getting pensions whereas only 4 lakh pensioners during the previous government tenure,” Thakur said, while replying to a question on the Congress promise to restore the Old Pension Scheme (OPS) to benefit 225,000 government employees, a crucial vote bank.

Thakur was elevated to the post after the party’s chief ministerial candidate Prem Kumar Dhumal suffered an abject defeat in the 2017 Assembly polls.

In the run-up to the Assembly polls, Prime Minister Modi launched Rs 6,000 crore development works across various sectors and inaugurated AIIMS Bilaspur, the foundation stone of which was laid by him on October 3, 2017.

As far as the Aam Aadmi Party (AAP) is concerned that is now setting its eyes on conquering hills after demolishing the citadels of all major political parties in Punjab, Thakur said the situation in Punjab was different.

“The people of Himachal earlier also rejected the third front. The leaders of AAP are over enthusiastic after their victory in Punjab, but they should also remember that their candidates have not only lost on all seats in the Assembly polls in Uttarakhand but their security deposits were also forfeited.”

For the Congress, corruption, unemployment and poor performance of the government are among the major poll issues.

Political observers told IANS that the BJP under the leadership of Thakur is facing anti-incumbency. This reflected in its humiliating defeat in the October 2021 by-polls in three Assembly seats and one parliamentary seat of Mandi having 17 Assembly seats in Mandi, Kullu, Lahaul-Spiti, Kinnaur and Chamba districts.

But Thakur believes it is simply a “Virbhadra wave” that did the trick for the Congress in the by-polls.

He said the Congress won because of the sympathy with the late Virbhadra Singh, which would not happen in the Assembly elections.

But to overcome the anti-incumbency, the BJP central leadership is focusing to induct seasoned politicians with organisational and ministerial experience from the Congress to give the state leadership a new look to win a consecutive term.

“For the Congress, the exodus of leaders means dampening the morale of the grassroots in the run-up to the polls,” a political observer told IANS.

He says the induction of three-time legislator Harsh Mahajan, who for over a decade played a crucial role in strengthening the party organization at the grassroots under Virbhadra Singh, in the BJP is the party’s ‘self-goal’.

The counting of ballots will be held on December 8.

In 2017, the BJP wrested power in Himachal from the Congress, winning close to a two thirds majority with 44 seats in the 68-member Assembly.

The Congress won 21 seats, independents two and the Communist Party of India-Marxist one.