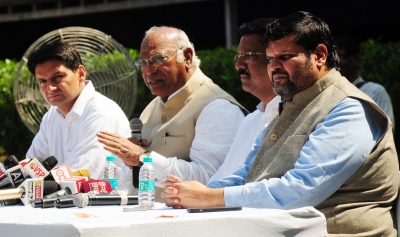 In message to Gehlot, three Cong spokespersons resign to campaign for Kharge

The move is being seen as a message to Rajasthan Chief Minister Ashok Gehlot, who refused to resign ahead of filing the nomination for the party president’s post, and his loyalist MLAs who boycotted the CLP where Kharge was observer then. Gehlot later apologised to Sonia Gandhi and opted out from the poll.

Kharge, who resigned from the post of leader of opposition in the Rajya Sabha on Saturday, said to the media, “I will begin my campaign from today and I am contesting not because of being a particular caste but I have been in the party for more than 50 years.”

On BJPs accusations of being remote controlled he said, “I have fifty years of experience in politics, and Gandhis have contributed immensely to the country in ten years of UPA rule… they did not take any post.”

Attacking the BJP, he said, “Anybody can tell how many delegates elected J.P. Nadda… 9,300 delegates will elect a new president in the party. The fight against the BJP will continue because their policies are anti-people.”

Kharge is facing Shashi Tharoor, who has begun his campaign for the party polls. Tharoor said on Saturday that he failed to understand as to why the G-23 leaders, who earlier talked about polls in the party, were now backing off and talking about general consensus.

It’s going to be Mallikarjun Kharge versus Shashi Tharoor in the Congress Presidential polls scheduled on October 17. And Kharge has got the support of not only the senior leadership of the party, but the G-23 leaders as well.

The Gandhi family has decided that it will not endorse any candidate this time. Sonia Gandhi and Rahul Gandhi both are of the view that polls will strengthen the party, which is very good, Tharoor said.