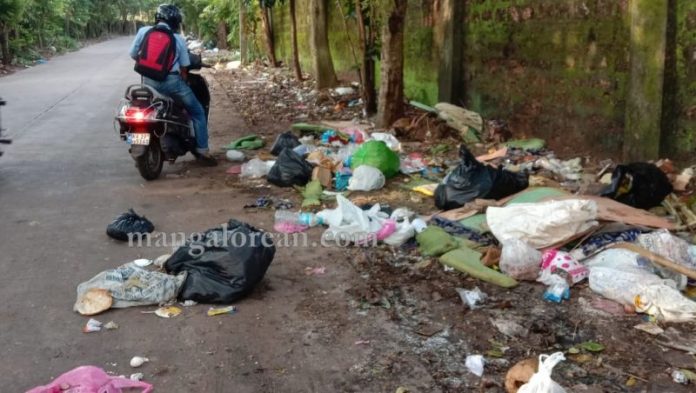 In Spite of CCTVs Installed, Man on Scooter KA 19 HB 5161 Litters Garbage on the stretch of Nandigudda -Marnamikatta Road (adjacent to Nandigudda Crematorium) at around 7.15 am on Monday 20 September

Mangaluru: A couple of weeks ago, the officials of Mangaluru City Corporation came up with a solution to stop the littering of garbage by ignorant people in Mangaluru, who have been disposing of waste wherever they feel like. In order to stop such activity, MCC has started online surveillance to check littering of public places, and as of now, CCTV cameras have been installed in few locations like two places in Nandigudda vicinity, Car street, Akash Bhavan, Falnir, Surathkal among other areas. The stretch of road in between Nandigudda Crematorium and Marnamikatta Circle has been a haven of garbage, where all kinds of waste are being littered by businesses, petty shop owners, street vendors, and also home people. In spite of many awareness programmes done, and many cleanups taken by organizations/NGOs, people have been still throwing garbage. 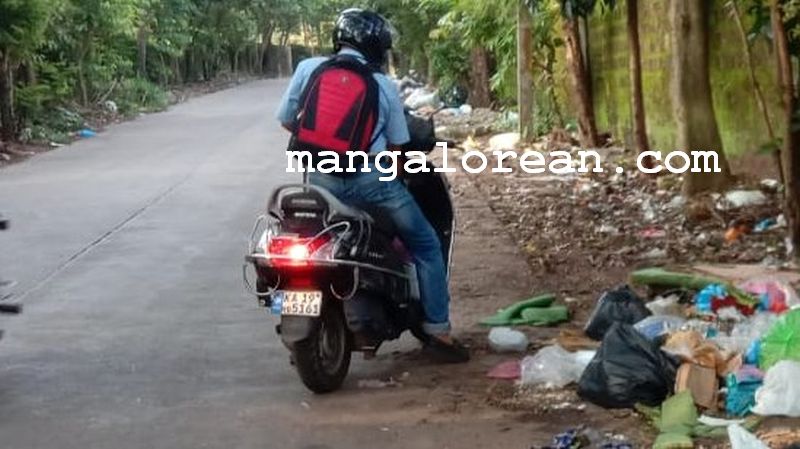 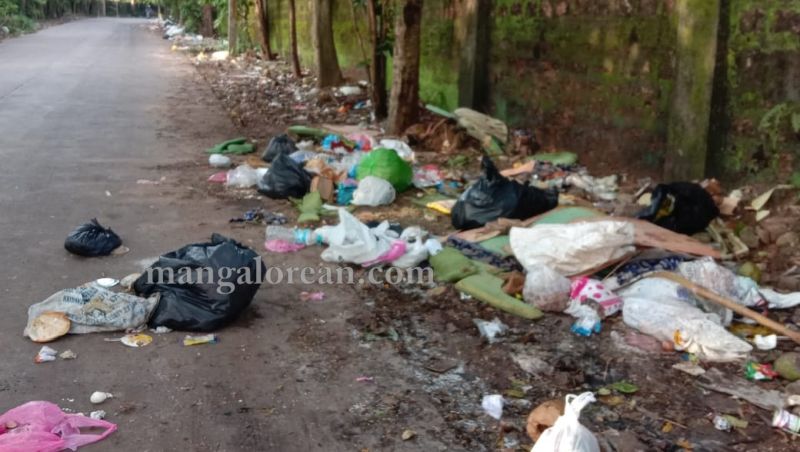 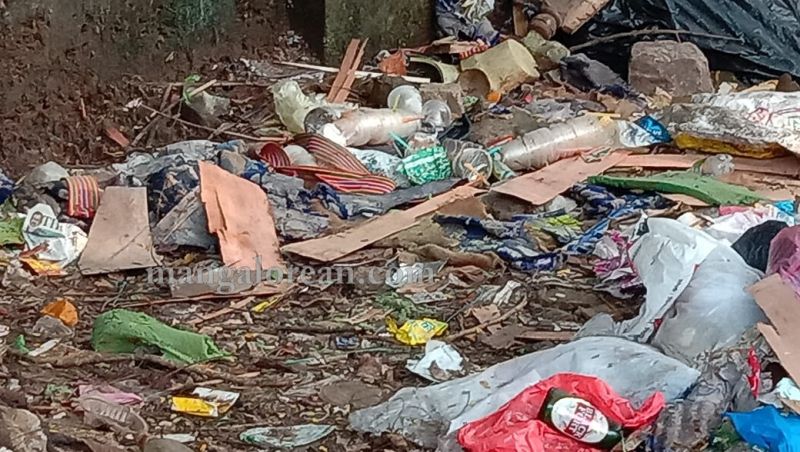 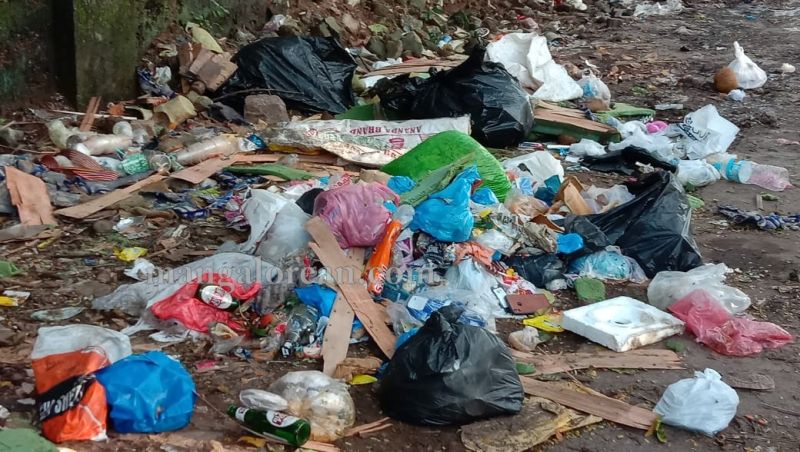 But in spite of two solar-powered CCTV installed on that stretch of that road, the garbage has been INCREASING rather than DECREASING. And this morning yours truly of Team Mangalorean was clicking the photos of the pathetic condition of this road, from nowhere, a man comes riding a Honda Scooter bearing Reg No KA 19 HB 5161, and tosses a bag filled with garbage, to add more mess to the already piled up garbage. When I tried to bring to his notice his illegal act, he ignored me and rode off. Oh well, the next step I took was to call the concerned officials at MCC, also Prakash Kurup-the Head at Antony Waste Handling Cell Ltd, followed by a call made to ACP (Traffic) M A Nataraj, who quickly took action in identifying the vehicle, and the person has agreed to meet the ACP today evening. 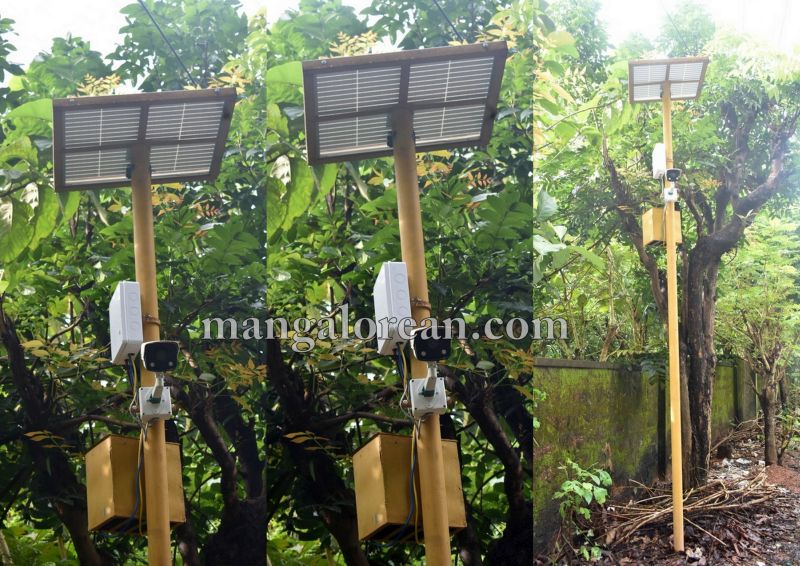 Only action like these can stop others from littering garbage on this stretch of road, and other places. Most of the garbage on this road is from street vendors (you can see rotten fruits/vegetables), from liquor shops (you can see empty tetra-pack of liquor/bottles), gutka packets from Paan Beeda shops, among others. These people simply don’t have the respect and the courtesy to keep our City clean, when many NGOs, organizations and others are working hard with campaigns etc to maintain Swachata in Mangaluru. Hope this person who litters the garbage will learn a lesson not to get involved in such acts anymore. Period. 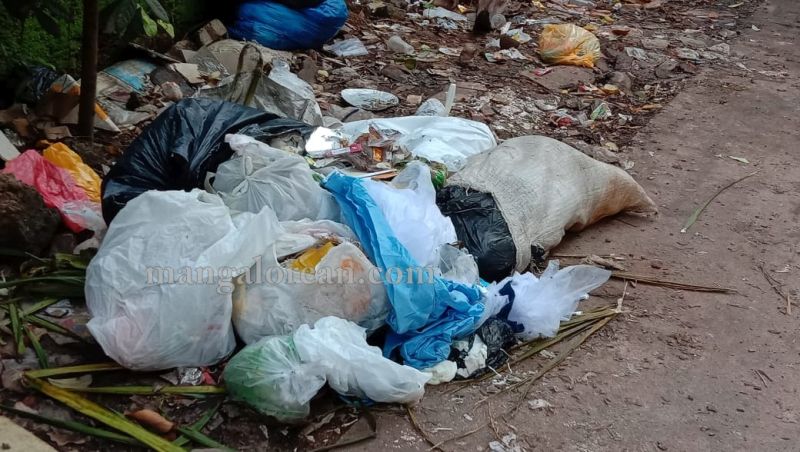 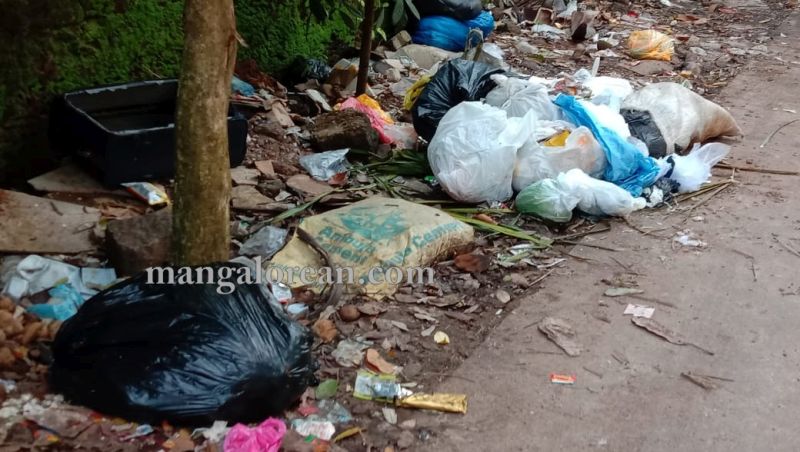 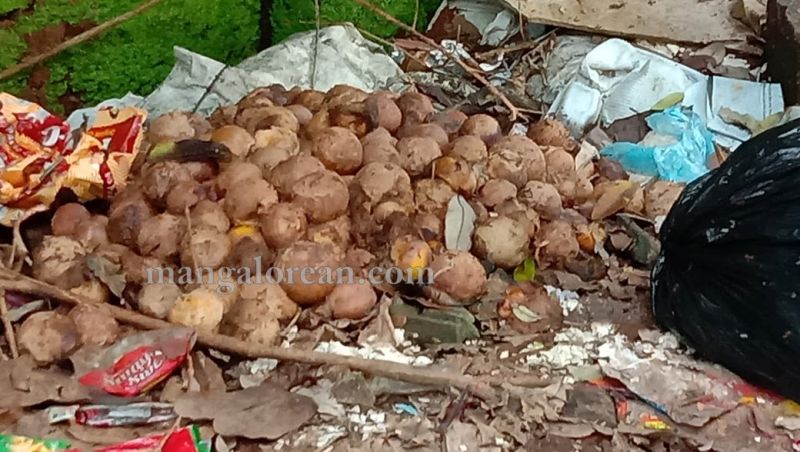 Even today this stretch of street from Nandigudda towards Marnamikatta or vice versa, is ridden with all kinds of waste, like- construction debris, kitchen waste, medical waste, empty liquor bottles, rotten fruits and veggies, what not-you can notice all kinds of thrash lining both sides of the street- and stray dogs ripping open trash bags and feasting on the leftover food waste. You can even see men urinating along the stretch of this street. What a stinky affair? What a pathetic and sad situation to look at the mess- and we call our City an Education Hub and SMART CITY? What a joke! 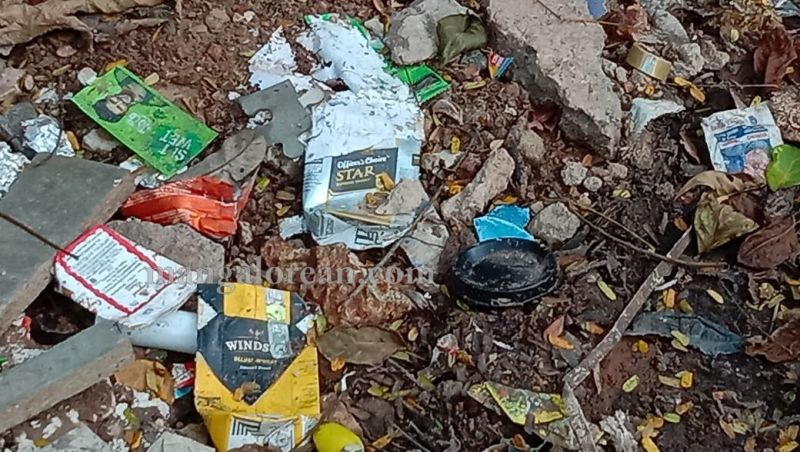 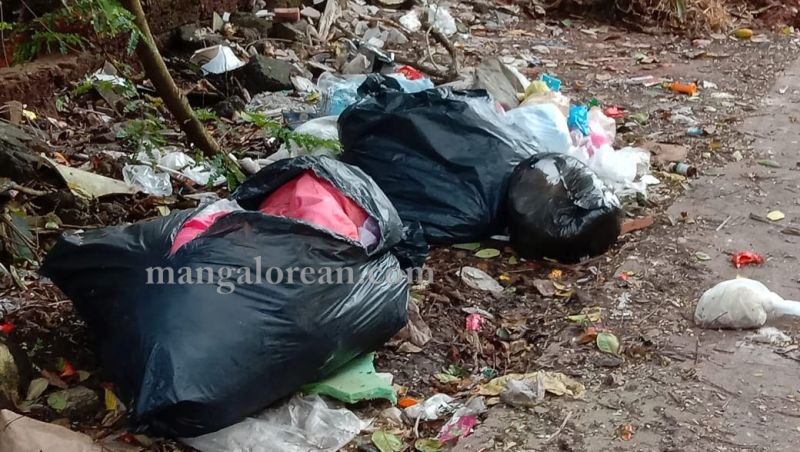 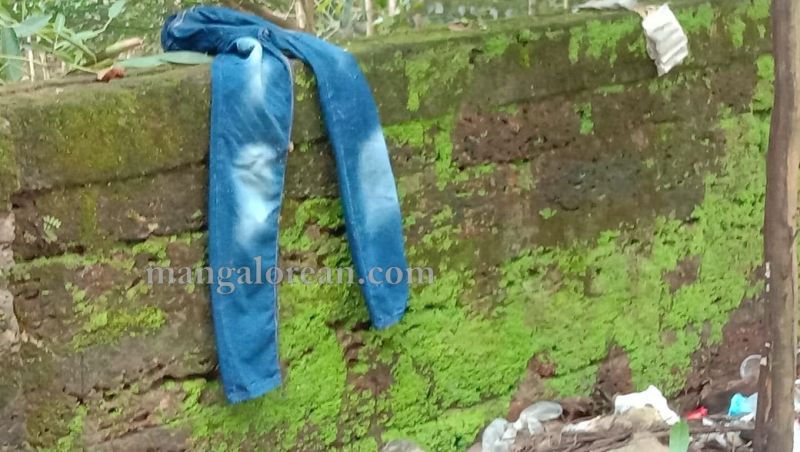 Speaking to Team Mangalorean last time, Shabarinath Rai-the Zonal Commissioner at MCC had said, “Thanks to the high-resolution solar cameras, a black spot which had garbage heaps at Akash Bhavana ward in the city is now a clean area. People stopped throwing waste at many such black spots after the city corporation placed the portable CCTV camera. The wireless and wifi-enabled high-resolution cameras with 4 mm lens with day and night vision are placed at the black spots, depending on complaints from the public. The portable camera unit mounted on a 15 ft GI pole works with a solar panel of 40 AH battery, and there is no need for an electricity connection for it”. 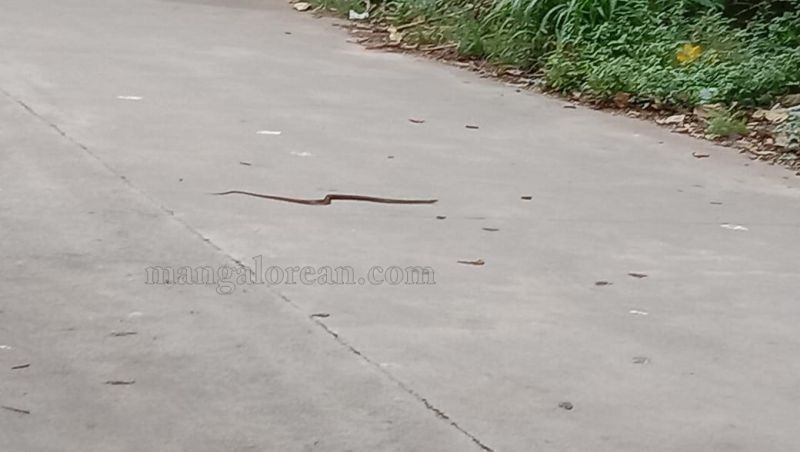 Apart from Stray Dogs, Crows, and other strays, even Snakes are feeding on the garbage-like this one crossing the street

“Further, it can be shifted anywhere in the city, based on the requirement. Each camera has memory cards with a data storage capacity of 128 GB. There is no need for cables to retrieve the footage from the cameras. The router with a SIM in the camera unit sends live footage from the spots, and the command-and-control centre of the MCC can identify violators and take necessary action. Meanwhile, health inspectors also may check footage through their mobile apps, he said, adding that the city corporation has procured six camera units, including the solar system, at a cost of Rs 4.1 lakhs. From the footage, officials can identify the people throwing waste, and find the registration number of the vehicle that violators use while littering public places too. We will use the cameras in all such black spots, and thereby try to keep public places clean. The new system will help the city corporation to file criminal cases against those who throw waste beside roads and other public places,” he added. 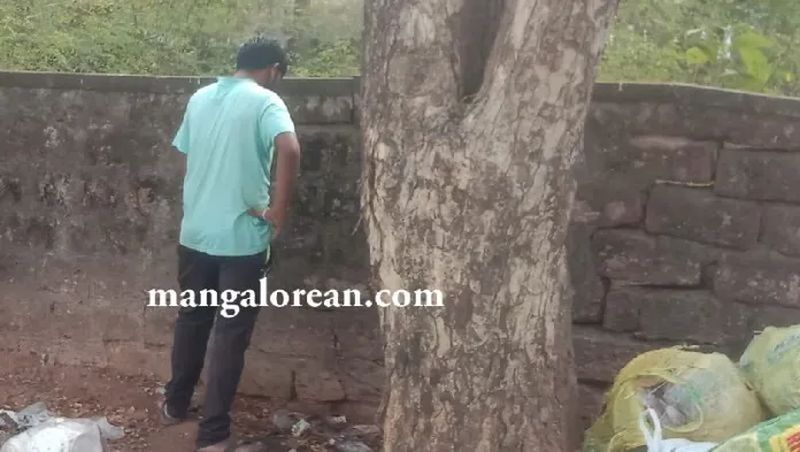 I only hope such action is taken in this respect, on this man who littered waste this morning so that others will stop doing it. Not long ago, Jeppu Bappal friends did a massive clean up in this area, but people being ignorant have trashed the area again. Such drives are a wonderful opportunity for people’s participation and they are major avenues to raise awareness on the importance of cleanliness in one’s neighbourhood- and Bappal Friends led the way to enlighten others in their neighbourhood of Nandigudda, Marnamikatta, Jeppu and others. As we echo the guiding thought ‘Swachha Mangaluru Kanasu Alla, Neevu manassu madabekashte’ (Clean Mangaluru is Not a Dream, You just have to make up your mind). But NGOs and other organizations can’t clean the mess every time people are ignorant of littering garbage. Hope these solar-powered CCTVs will serve the purpose of catching those who intentionally litter garbage. Let’s hope for the best!