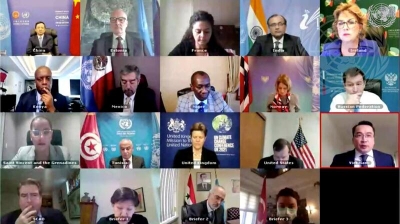 United Nations: India has expressed concern over the possibility of terrorists getting hold of chemical weapons and called for unrelenting global action against them.

At a Security Council session on Tuesday on the use of chemical weapons in Syria, India’s Permanent Representative T.S. Tirumurti, said, “India remains concerned about the possibility of such weapons falling into the hands of terrorist organisations and individuals.”

Several terrorist organisations operate in Syria, notably the Islamic State which is active in some areas even after it had been ousted from the large tracts it controlled.

Tirumurti reiterated India’s unequivocal condemnation of the use of chemical weapons.

The session, held virtually, was the Council’s first open meeting and India made its first official statement after joining the body this month as a non-permanent member.

The session tested the diplomatic finesse of New Delhi, which has amicable ties with Damascus, and was caught between the US and its allies opposed to Syria, and Russia and China, which are supportive of it.

“In our view, politicisation of the issue is neither helpful nor productive,” Tiriumurti said.

“Any concerns should be addressed on the basis of consultation among all concerned parties,” he added.

He said: “We encourage continued engagement and cooperation between Syria and the OPCW (Organisation for Prevention of Chemical Weapons) Technical Secretariat towards an early resolution of all outstanding issues. India has provided a financial contribution of US$1 million to the OPCW Trust Fund for activities relating to destruction of chemical stockpiles and related facilities in Syria.”

Nakamitsu said that the international community cannot have full confidence that Syria’s chemical weapons programme has been totally eliminated because Damascus has not yet provided some data.

US and Russia faced off with a bitter exchange.

US Deputy Permanent Representative Richard Mills accused the Bashar al-Assad’s “regime” of making “a mockery of the structures in place to realise a world free of chemical weapons”.

He accused Russia of running a campaign to discredit the OPCW, which he asserted, had corroborated charges that Damascus had used chemical weapons against its people and .

Russian Deputy Permanent Representative Dmitry Polyansky accused the western nations of using the OPCW as a tool of political manipulation.

He defended Syria saying that it had joined the OPCW and destroyed its chemical weapons stockpile.

He alleged that the OPCW had used inconclusive evidence like videos from social media and testimonies from those he said were biased witnesses from the anti-al-Assad opposition.