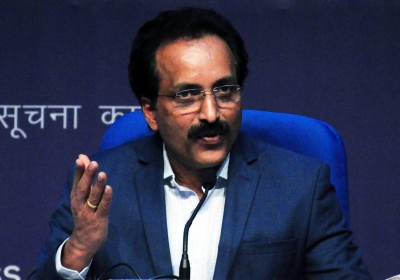 Chennai: With a shortage of rockets to launch satellites, India with its LVM3 or GSLV Mk3 rocket now has a slot in the global commercial satellite launch market, said S.Somanath, Secretary, Department of Space and Chairman, Indian Space Research Organisation (ISRO).

He also said India is planning to ramp up production of the LVM3 rocket.

“There is a shortage of commercial satellite launch vehicles for putting into orbit multiple satellites to form a constellation. The Russian rockets are not in consideration now. Further the Ariane 6 rocket of Arianespace got delayed. The commercial potential of Chinese rockets is not accepted by the West. Hence India has a slot now,” Somanath told IANS.

It was IANS which first said that India has an opportunity in the global commercial satellite launch market soon after the US and Europe’s economic sanctions against Russia for its military action.

“All those countries feeling the pinch due to the absence of Russian rockets for satellite launches may look at alternatives. While the bulk of the satellite launch contracts will be taken by the US and Europe, there will be others who may look at other options. India’s neutrality has created a new market segment,” Chaitanya Giri, Founder, DAWON Advisory & Intelligence, had told IANS.

Space sector exports had told IANS that to cash in on the opportunities, India should accelerate its satellite launch capabilities, and announce productivity-linked incentive (PLI) schemes for the aerospace sector.

“A plan is being made to ramp up LVM3 production to four or five per year after one to two years. And investments are needed for that. NewSpace India Ltd (NAIL-commercial arm of ISRO) will look into how to do this,” Somanath said.

For the first time ISRO is introducing its heavy lift rocket Geosynchronous Satellite Launch Vehicle-MkIII (GSLV-MkIII) into the global commercial launch market renaming it as LVM3.

Normally, the GSLV rocket is used for launching India’s geostationary communication satellites. And hence it was named as GeoSynchronous Satellite Launch Vehicle (GSLV). The GSLV MkIII refers to the third generation rocket.

As the rocket that will fly on Sunday morning will be orbiting the OneWeb satellites in Low Earth Orbit (LEO), ISRO has renamed GSLV MkIII as LVM3 M2 (Launch Vehicle MkIII).

On Sunday at 12.07 a.m. the LVM3 will fly with 36 small satellites of Network Access Associated Ltd (OneWeb) in LEO.

OneWeb, is a joint venture between India Bharti Global and the UK government.

The satellite company plans to have a constellation of about 650 satellites in low earth orbit (LEO) to offer communication services.

The LVM3 M2 is a three stage rocket with the first stage fired with liquid fuel, the two strap on motors powered by solid fuel, the second by liquid fuel and the third is the cryogenic engine.

The ISRO’s heavy lift rocket has a carrying capacity of 10 ton to the LEO and four ton to the Geo Transfer Orbit (GTO).

The total launch mass of OneWeb satellites will be 5,796 kg, said ISRO.

“We have contracted for one more launch of 36 OneWeb satellites. More launches may come based on our performance,” Somanath remarked.

The Indian space agency’s other rocket PSLV has a carrying capacity, of 3.2 ton to 3.8 ton to LEO orbit depending on the variant.

With LVM3, ISRO can offer two rockets for the global commercial launch market.

Queried about the small satellite market Somanath said: “There are too many predictions based on different approaches. Primarily by the LEO communication network and small satellite imaging services. However it will be a few thousands per year.”

He said NSIL is offering PSLV and will also take up the Small Satellite Launch Vehicle (SSLV) to tap this market in the next few years.

The SSLV has a carrying capacity of 500 kg to LEO.

The ISRO Chairman said GSLV rocket will be launched up to two per year to meet the NavIC (India’s navigation satellite system) and other scheduled missions.

“The GSLV rocket will be for internal (domestic) demand. Only PSLV and LVM3 are into commercial service now,” Somanath said.

“We need to make industries ready to produce PSLV, SSLV and LVM3 in bulk on their own. Otherwise, large scale launch service is difficult. This can also be modulated by geopolitical conditions evolving,” Somanath remarked.

The first step towards sourcing PSLV rockets by NSIL has been taken with the award of Rs.860 crore contract to make five rockets to HAL-L&T consortium.