Home Fit & Fun India would be one of my top picks in hockey World Cup:... 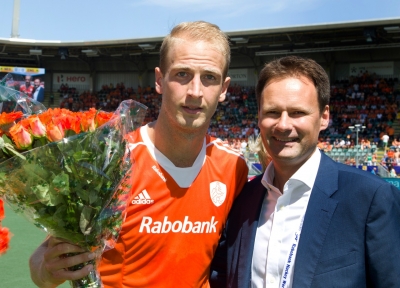 India would be one of my top picks in hockey World Cup: Dutch legend Stephan Veen

Two-time World Cup and Olympic champion, Dutch hockey legend Stephan Veen believes, India, as a team, has made huge progress in the last couple of years and is one of his top picks going into the World Cup in Bhubaneswar and Rourkela next year.

New Delhi: Two-time World Cup and Olympic champion, Dutch hockey legend Stephan Veen believes, India, as a team, has made huge progress in the last couple of years and is one of his top picks going into the World Cup in Bhubaneswar and Rourkela next year.

India made history at the Tokyo Olympics last year, winning a bronze medal after more than four decades of drought and settled for silver at the 2022 Birmingham Commonwealth Games.

Veen, who was one of the key figures in the triumphant Dutch side of the 1990s, said, “I think India has grown as a team over the last couple of years. They have a home advantage now, they are much more experienced. So, India would be one of my top picks. I think Australia as well. But, be aware of Netherlands, Germany and Spain.

“In tournaments like the World Cup and the Olympics, there’s always one or two surprises, so it’s difficult to predict (the winner). For spectators, great games are coming up, and that’s good for our sport,” the legend, who played as a midfielder, said.

On the reasons behind Netherlands’ consistency during his time, the World Cup-winning captain said that a great mix of leadership, tactics, and quality of players were the strengths of his team in the 90s.

“Of course, we had a great team; there was a lot of quality in it. Dutch would like to attack, but I think we found the balance between defending and attacking with great penalty corner specialists and midfielders. I also believe that there was strong leadership within the team, not only Captains but players also took responsibility when it was necessary during the game,” said Veen, who was named FIH Player of the Year in 1998 and 2000.

“I think If you got the attitude to improve every game, in every single training, and have the persistence to keep on going, despite setbacks, that’s where it all starts. If that mentality is in the team, you’ve got a great base to build and grow. A lot of players had that mentality in the 90s.

“There were different personalities with different approaches and leadership styles. Our opponent couldn’t predict, where the danger would come from and that was our strength. The coaches’ tactics at that time also helped us. But, it’s all about small differences that decide the game, and we were able to recognise those important moments during the game,” he added.

The former midfielder’s first honours with the Netherlands came at just the age of 19, winning the 1990 World Cup in Lahore. He was part of a Dutch side that defeated the hosts Pakistan 3-1 in the final to clinch the title.

After winning gold at the 1996 Atlanta Olympics, Veen took over the Netherlands’ captaincy and led the team to many successes including the 1998 World Cup glory at home and the gold medal feat at the 2000 Sydney Olympics. The Netherlands edged past Spain 3-2 in the Final to clinch the 1998 World Cup in front of the home crowd in Utrecht.