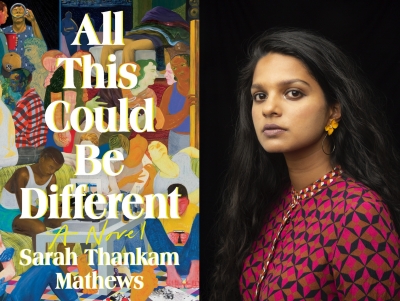 New York: Indian-American author Sarah Thankam Mathews is among the finalists for the 2022 National Book Awards, which will be announced on November 16 at Cipriani Wall Street in New York City.

Mathews’ debut novel ‘All This Could Be Different’, is listed in the fiction category and tells the story of a young queer immigrant who creates a community for herself while grappling with the oppressive demands of capitalism.

“I simply will never be over this,” Mathews tweeted after her name was announced by The New York Times earlier this week.

Mathews grew up between Oman and India, and moved to the US at seventeen. Her work has been published in places including AGNI, SSENSE, and Best American Short Stories.

“Sarah Thankam Mathews has written one of the buzziest, and most human, books of the year,” the Vogue said.

“…an extraordinary novel, spiny and delicate, scathingly funny and wildly moving. Sarah Thankam Mathews is a brilliant writer, one whose every ringing sentence holds both bite and heart,” Lauren Groff, author of Matrix, said.

A total of 25 finalists will be contending for the awards. Publishers submitted a total of 1,772 books for this year’s National Book Awards: 463 in fiction, 607 in non-fiction, 260 in poetry, 146 in translated literature, and 296 in young people’s literature.