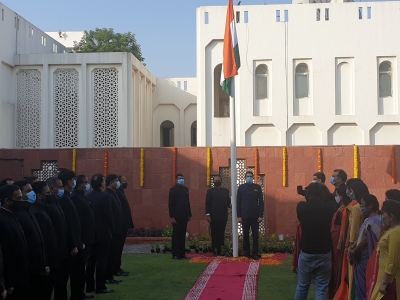 Dubai: The Indian Consulate in Dubai will on Saturday celebrate the 16th Pravasi Bharatiya Divas (PBD), the Non-Resident Indians (NRI) Day Convention, in a virtual format due to the ongoing coronavirus pandemic.

Earlier, the biennial event witnessed the participation of several Indian expats from all over the United Arab Emirates (UAE). But due to the health crisis, the Consulate has limited its celebrations by hosting a virtual session which will be inaugurated by the Indian Prime Minister Narendra Modi, Gulf News reported.

The event marking the PBD at the consulate would be held from 9.30 a.m. till 11.30 a.m. on Saturday, Neeraj Agrawal, consul (Press, Information and Culture) told Gulf News.

The theme of this year’s PBD is “Contributing to Aatmanirbhar Bharat (Self-Reliant India)”.

The inaugural session will include a keynote address by chief guest, Suriname President Chandrikapersad Santokhi.

According to Agrawal, the inaugural session will be followed by two plenary sessions, which will be live-streamed.

On Friday, a Youth PBD was celebrated virtually on the theme “Bringing together Young Achievers from India and Indian Diaspora”.

The PBD events will be live webcast on the PBD India website and the Indian Ministry of External Affairs’ YouTube channel.

The consulate will also live-stream the events on its social media accounts.

Since 2003, India has been observing January 9 as PBD to celebrate the Indian diaspora across the world.