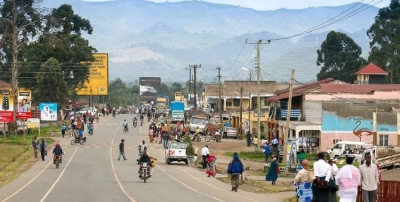 Police constable Elioda Gumizamu, 21, a member of the Field Force Unit has been arrested after he stormed a hardware shop last week, where Patel worked, and fired at him.

Patel was attending to a client when the off-duty armed cop walked in and shot him in the chest. Gumizamu was apprehended by the locals as he tried to flee the crime scene, and handed over to the police, The Daily Monitor reported.

The victim was taken to St Francis hospital in Mutolere where he succumbed to his injuries.

According to local media reports, Gumizamu told police that he killed Patel in a case of “mistaken identity”.

He told the police that he was given the “contract to kill” the owner of the hardware shop, Patel’s cousin.

The Kisoro police station are now looking into Gumizamu’s claim and are also on a lookout for the person who commissioned the killing.

The Kisoro Resident District Commissioner Shaffique Sekandi told the Daily Monitor that Gumizamu had been in the police force for four years.

Patel, a native of Thasra in Kheda district, had moved to Uganda four years ago, along with his wife, to work in his cousin’s hardware shop.

According to estimates, at present, there are 35,000 Indians living in Uganda with the majority of them mainly concentrated in Kampala and Jinja.

People of Indian origin and NRIs are estimated to have invested over $1 billion in Uganda in the last two decades, according to the High Commission of India in Kampala.

Indians, who constitute less than 0.1 per cent of Uganda’s population, contribute a major part of the East African nation’s direct taxes.

The incident comes close on the heels of two Indians who remain missing in Kenya since July this year.

A close aide of Kenyan president recently said that they have been killed by the disbanded Special Services Unit of the country’s Directorate of Criminal Investigations.