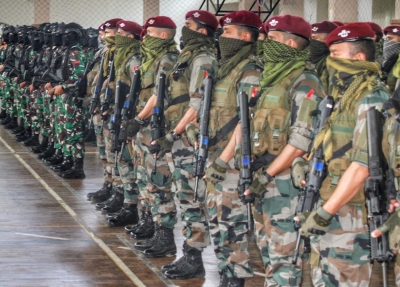 Indian and Indonesian Special Forces have started a joint military exercise ‘Garuda Shakti’ in Indonesia, aiming to enhance cooperation and interoperability between the two countries.

“Under this military-to-military exchange programmes, a contingent of Indian Special Forces troops is currently engaged in a bilateral joint training with Indonesian Special Forces at Sangga Buana Training Area, Karawang, Indonesia. Exercise ‘Garuda Shakti’ is the eighth edition of the series of bilateral exercises under this banner,” a Defence Ministry official said.

The Defence Ministry in a statement on Wednesday said that the exercise aims at enhancing understanding, cooperation and interoperability between the Special Forces of both armies.

“The scope of the joint exercise includes orientation to advance special forces skills, sharing of information on weapon, equipment, innovations, tactics, techniques and procedures and lessons learnt from various operations undertaken, Special Forces Operations in Jungle terrain, strikes on terrorist camps and a validation exercise integrating basic and advance special forces skills apart from gaining an insight into the lifestyle and culture of both countries to foster military cooperation,” the Ministry stated.

“The joint training would also focus on a high degree of physical fitness, tactical drills, techniques and procedures for which a comprehensive 13-day training programme has been worked out. The exercise will culminate in a 48-hour long validation exercise,” it said.

“The joint exercise will facilitate both armies to know each other better, and share their wide experiences and combat experience on countering terrorist operations, regional security operations and peace keeping operations in an international environment. The exercise is yet another significant milestone in ensuring cordial relations between the two countries and another step forward towards ensuring regional security,” the Defence Ministry added.