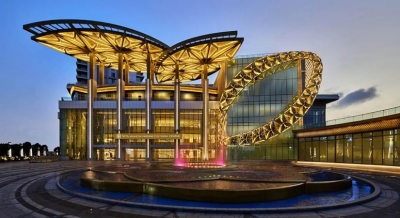 New Delhi: The Nita Mukesh Ambani Cultural Centre (NMACC), a first-of-its-kind venue for the arts, will open its doors in Mumbai’s Bandra Kurla Complex, reveals Isha Ambani. It promises to be a significant cultural monument, dedicated to her mother Nita M. Ambani, philanthropist, and longtime supporter of the arts.

The Jio World Centre, located in the centre of India’s financial and entertainment hub, is where the NMACC is located in addition to housing the nation’s largest conference centre, retail, and hospitality establishments, and more. The three-story structure will include facilities for both visual and performing arts. The Grand Theatre, The Studio Theatre, and The Cube are three specifically designed performance venues. They were all built with cutting-edge technology to accommodate a variety of experiences, from private screenings and thought-provoking discussions to multilingual programming and international productions. The centre will also open The Art House, a four-story facility that will feature prominent artists from India and around the world.

The Nita Mukesh Ambani Cultural Centre, according to Isha, is the culmination of her mother’s love for India and her passion for the arts. It is much more than just a building. She has always wanted to build a community-friendly platform for viewers, performers, artists, and other creatives. Her goal for the NMACC is to exhibit the world the best that India has to offer and to draw the world to India.

On March 31, 2023, the doors to the NMACC will open with a spectacular three-day launch.

Civilization to Nation: The Journey of Our Nation: In the 2,000-seater Grand Theatre, acclaimed Indian playwright and director Feroz Abbas Khan will bring together a sensory narrative of Indian culture told through the tenets of the classical Natya Shastra, the ancient Sanskrit treatise on the performing arts. This dramatic showcase boasts over 700 performers and features art forms such as dance, music and puppetry.

India in Fashion: The Impact of Indian Dress and Textiles on the Fashionable Imagination: Curated by prolific author and costume expert Hamish Bowles, editor-in-chief, The World of Interiors, international editor-at-large, Vogue US, this exhibit traces the widespread impact and influence of India’s sartorial traditions in textiles, jewellery and surface ornamentation on global fashion spanning the 18th-21st century. Accompanying this exhibition is a coffee table book published by Rizzoli, documenting a comprehensive history of India and its impact on fashion worldwide for the very first time.

Sangam Confluence: Curated by India’s leading cultural theorist Ranjit Hoskote and Jeffrey Deitch, American curator, former director of the Museum of Contemporary Art (MOCA), Los Angeles and founder of his eponymous gallery, Sangam Confluence is a group art show that celebrates diverse cultural impulses and traditions at the 16,000 sq. ft Art House. The exhibit, spread over four levels, explores the multiplicity of India through the works of 11 esteemed and emerging Indian contemporary artists and western artists influenced by India.