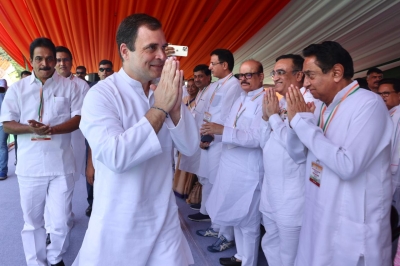 With days left before Congress’ ‘Bharat Jodo Yatra’ enters Madhya Pradesh, a letter threatening to assassinate Rahul Gandhi and state Congress chief Kamal Nath along with threats of serial blasts in Indore towards the end of this month has kept the state police on their toes.

Bhopal: With days left before Congress’ ‘Bharat Jodo Yatra’ enters Madhya Pradesh, a letter threatening to assassinate Rahul Gandhi and state Congress chief Kamal Nath along with threats of serial blasts in Indore towards the end of this month has kept the state police on their toes.

The matter came to the fore after a shopkeeper in Indore on Friday reached a local police station and showed the threatening letter to the cops, which he had received through government postal service on Thursday night.

According to Indore police, a three-page letter containing the threats was sent to a prominent sweet shop in Indore’s Sapna Sangita-Tower Chauraha area through the government postal service on Thursday evening.

The police said a case has been lodged against unidentified accused u/s 507 IPC (criminal intimidation by an anonymous communication) at Indore’s Juni police station. Sources in the police told IANS that the top cops in Indore are mulling over slapping National Security Act (NSA) against the accused.

The letter, which bears the photocopy of an election photo identity card (EPIC) of a Karnal-based youth, is written in Hindi. Containing abusive language, the letter, while mentioning about the 1984 anti-Sikh riots, points to Kamal Nath’s alleged role in the targeted killings of the Sikh community.

The letter further mentions serial blasts across Indore, particularly the historic Rajwada Palace in the heart of the city, in November last week. It also contains the threat to assassinate Rahul Gandhi and Kamal Nath during former’s Bharat Jodo Yatra in Indore.

Deputy Commissioner of Police, Rajesh Kumar Singh, while confirming the development, said that after lodging a case, the police are probing the matter from all possible angles, as the content of the letter is highly sensitive.

Notably, a controversy had erupted in Indore during the Guru Nanak Jayanti programme at Khalsa College, where a senior kirtan singer, Manpreet Singh Kanpuri, had lashed out at the organisers over the presence and felicitation of Kamal Nath at the event. He had particularly raised the issue of 1984 anti-Sikh riots and vowed not to come to Indore again.

“There is no threat to Rahul Gandhi or Kamal Nath or anyone else in Madhya Pradesh. I believe that it is a well-thought conspiracy by the Congress to defame the BJP government in Madhya Pradesh,” he said.

Rahul Gandhi’s Bharat Jodo Yatra is slated to enter Madhya Pradesh via Burhanpur district on November 20. The Yatra will reach Indore between November 28 and 30.