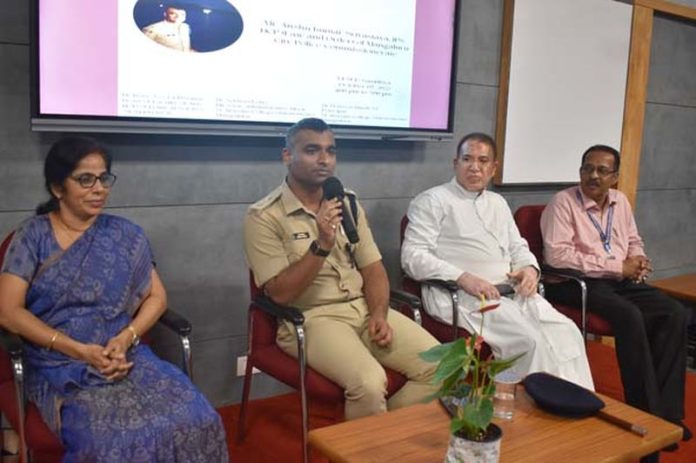 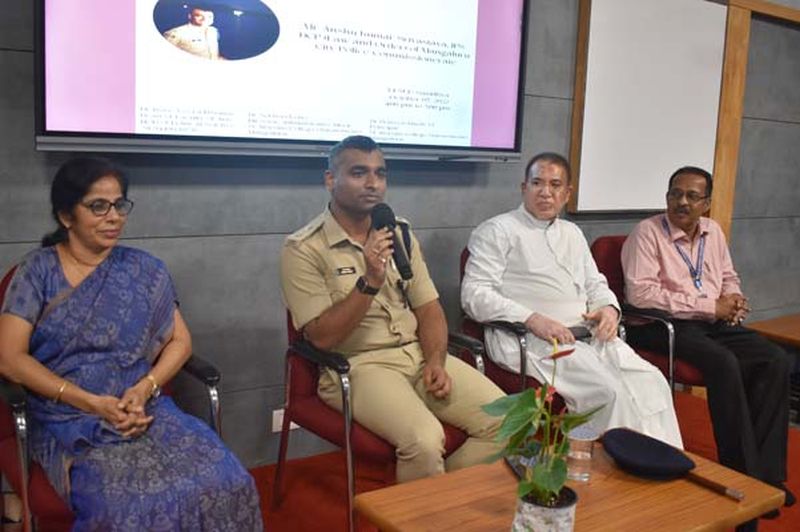 The Principal, Rev. Dr. Praveen Martis S.J., addressed the gathering with words of welcome. He said that the youth can “make and break” the society and therefore emphasised, quoting the former USA President Roosevelt, on the need for building the youth for the future. He highlighted the initiative the college has undertaken to impart civil service coaching to students within and outside the college. 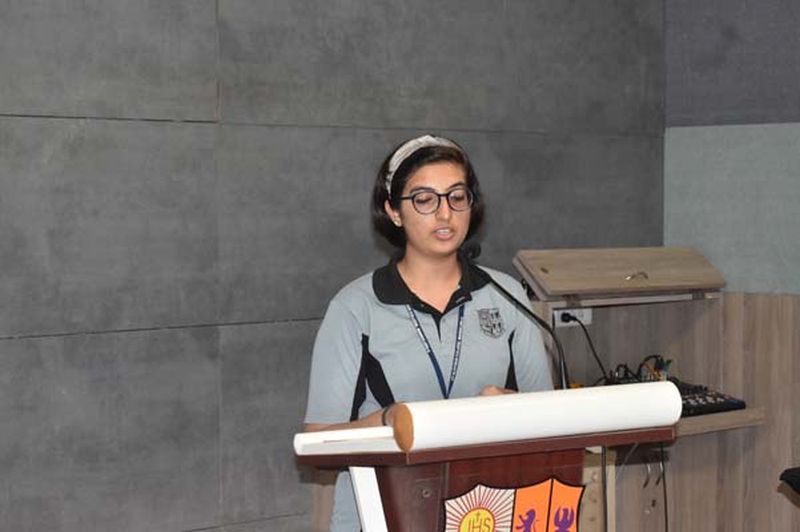 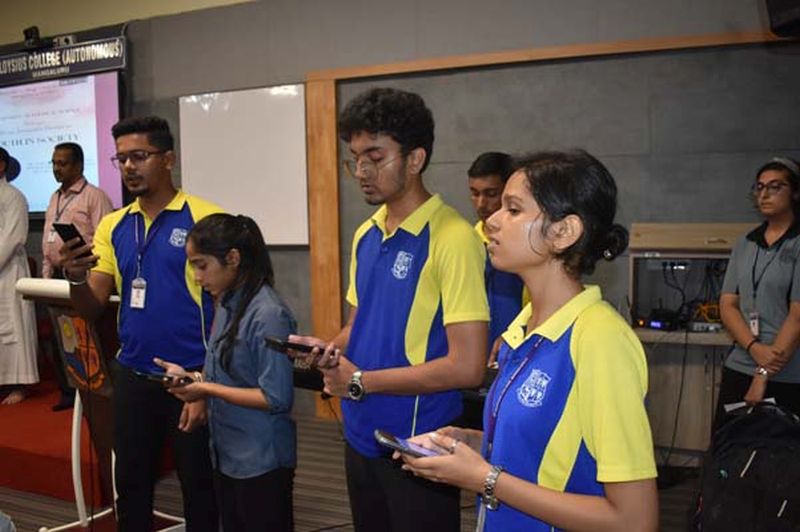 Anshu Kumar Srivastav is a 2018 batch IPS officer. He was the SP in Coastal Security Force, Udupi before his current posting at Mangaluru and an alumnus of IIT Delhi wherein he completed mechanical engineering. DCP Anshu Kumar associated most of the progress in the society to the contributions of the youth by exemplifying Mahatma Gandhi, Ishwar Vidyasagar, Jayaprakash Narayan etc who started young to lead social cum political change. Today start-ups or innovations are being largely led by the youth wherein his own classmates or seniors from IIT Delhi were instrumental in the creation of Zomato or Flipkart. Youth expect and drive the change and many a times expect challenges of conservatism and pessimism.

The DCP with his typical sense of humour participated with about 100 students through a lively interaction. He narrated his journey from his childhood to IIT Delhi and finally as a IPS officer. He advised students that a strong decision and self-discipline can enable students to clear the UPSC exams and in one’s job area. Motivation is not a significant factor as it can be lost over a period of time whereas self-discipline keeps a person to do one’s job against all circumstances. 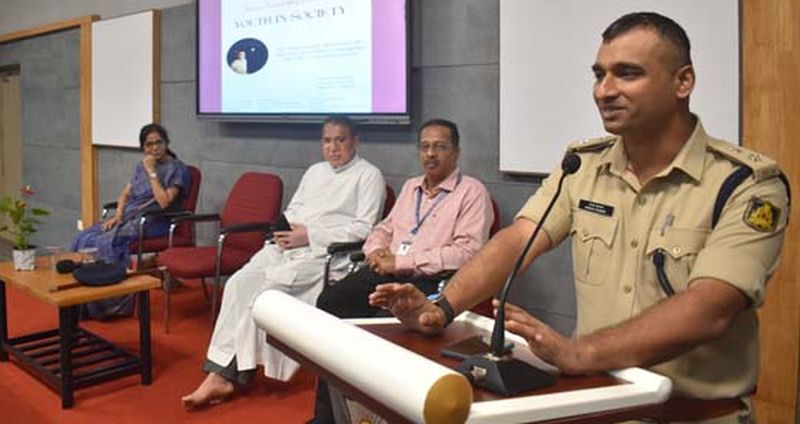 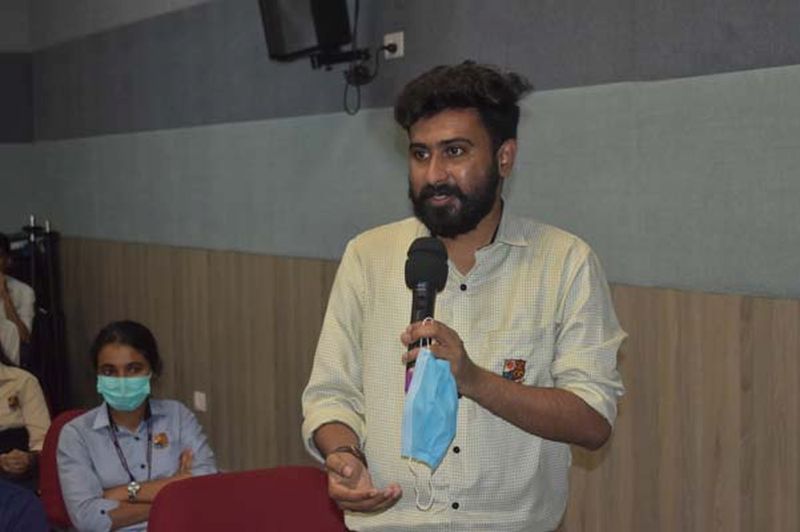 On questions regarding the spread of fake news and the role of police, DCP said that today youth are not able to decide on authentic news. Media is driven by corporatism of creating sensational and emotion-oriented news. It is the responsibility of the reader to read, verify and then circulate.

On questions of corruption in public administration and the ability of officers to criticise the government, he said that dedication, honesty and up-rightness helps a person or officer to overcome such evils. IPS being a constitutional post, an officer can refuse to follow an unconstitutional order instead of training guns on the government through media.

Governments decide on policies through much deliberation and in consultation with stakeholders which also include the police. It is a myth that local MPs and MLAs control the IPS officers. Some questions were asked on the rise of fear among youth given the communal nature of politics, poverty and sense of political helplessness. 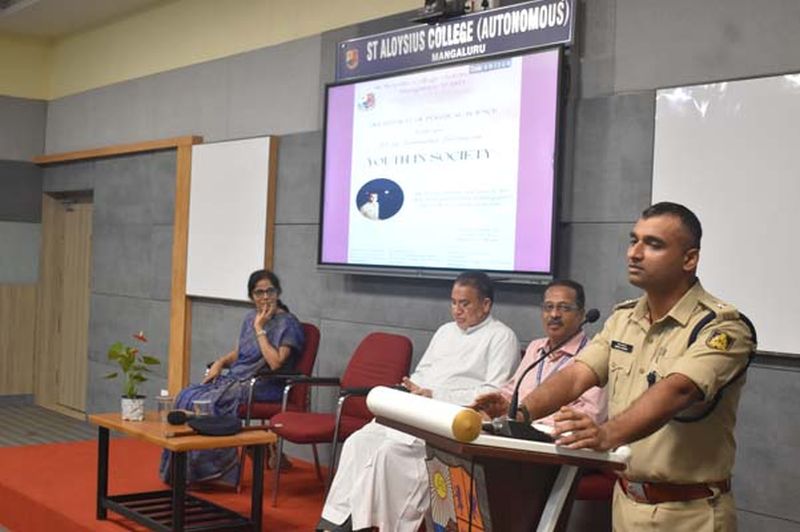 The DCP said that the youth have to face resistance if they have to stand up for their rights or truth. Apart from the police meeting the civilians under various dialogue formats in Mangaluru under the beat system or with peace communities, SC/ST communities etc., it is decided to start youth communities too. He said that justice is delayed not because of the police, but because of delay in court cases. Cases are delayed when the victim or witnesses turn hostile. Being upright sometimes requires you to follow up a case through the court system and hence requires patience instead of succumbing to the system.

Towards the end, the DCP emphasised that the youth should stay away from drugs which can ruin one’s life and future; any cases of blackmail to be reported to the police as early as possible to avoid further victimisation; and to be careful as to what one shares on the internet s the data is saved forever. He extended his help to students, welcomed them to his office for interaction, and most importantly willingly agreed to assist students of the college for research-based projects in collaboration with the police department. 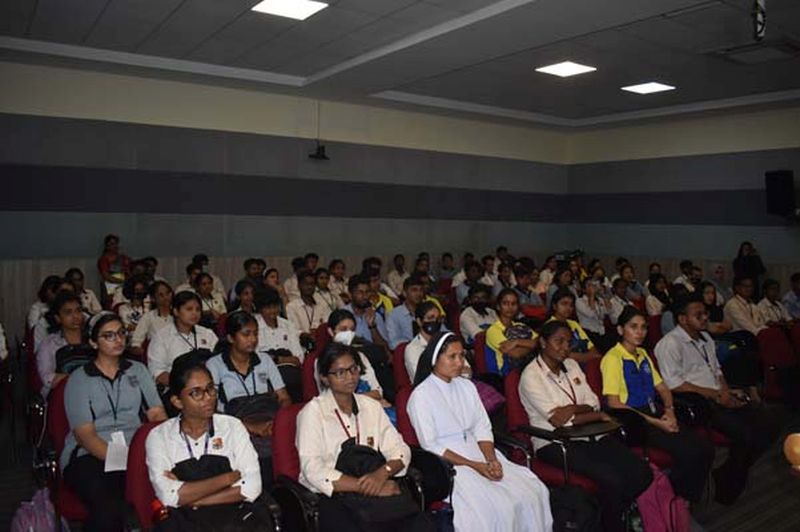 Dr. Norbert Lobo welcomed the DCP with a sapling while the Principal thanked with a memento. Also Sahil Khader from IIBA presented a memento on behalf of the students. The entire program was initiated and coordinated by Dr Rose Veera D’Souza, Dean of Faculty of Arts and HOD Political Science. Vidhula Lokesh from III BA Political Science compered and delivered the vote of thanks.