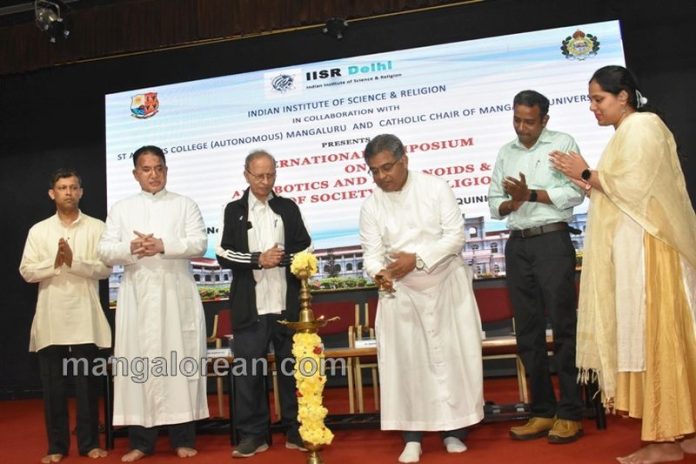 Mangaluru: An ancient Chinese proverb goes like this: “ When the winds of change blow, some people build walls and others build windmills.” It is truly real to the world we live in where centuries of evolutions, inventions, innovations and revolutions have given birth to this race of men where staying ahead of time is the only priority. While many built walls to break themselves from the changing perspective of what they believed in, several others broke the illusion of blind faith and built windmills. Science-the synonym for true innovation had always been at loggerheads with faith, with religion. But as people discovered its true essence they realised, A Scientific discovery is also a religious discovery. There is no conflict between science and religion because both are seeking the same truth. 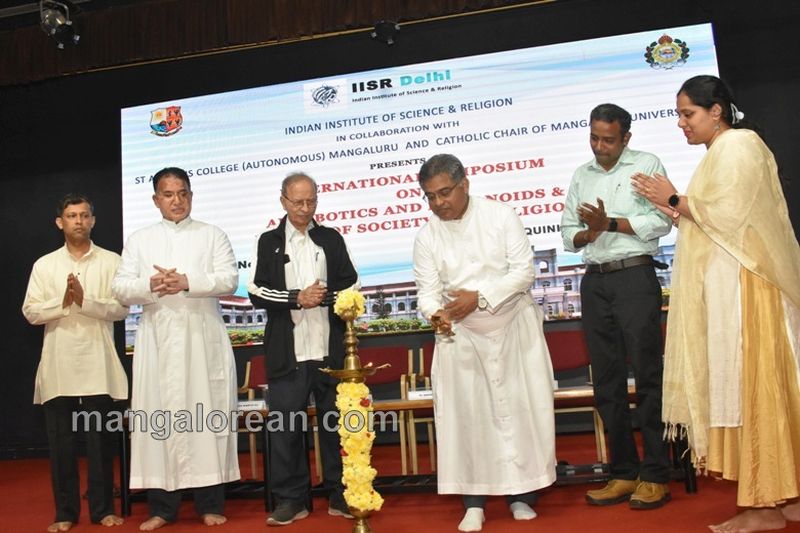 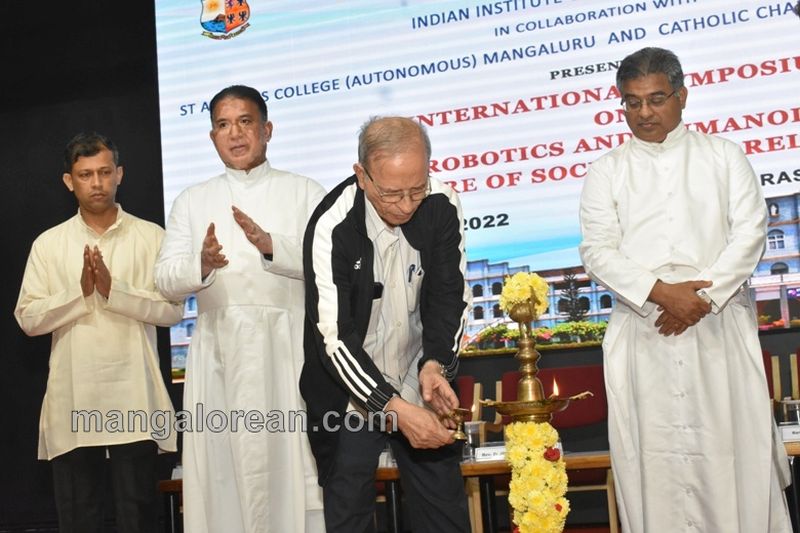 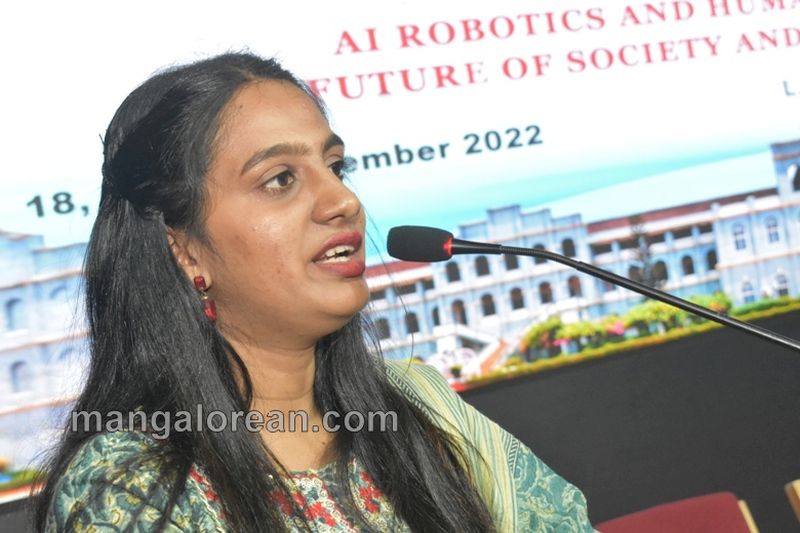 From Galileo Galilei being hounded by the catholic church for his heliocentric beliefs, for questioning the faith of the people, to having theology studied to understand the contemporary interactions between science and religion the world has come a long way. But somewhere down the line, religion and faith started to take a back seat as the millennial generation and now Gen Z has entrenched their lives to a more science-driven – alphanumeric and algorithms-driven life. That is where the very purpose of our gathering here today comes to life.

The international symposium on Artificial intelligence, robotics and Humanoids collectively with a discussion o the future of society and religion organised by the Indian institute of science and Religion in collaboration with St Aloysius college- autonomous, Mangaluru and the chair of Christianity Mangalore university held today (Friday, 18 November) reinstitutes the elements that have been diminishing in the field of science and religion. The venue witnessed a highly intellectual dialogue between science and religion that might have been overlooked by people in the fast pacing world. Mangaluru being the cradle of education has seen many learned men yet the city is still a little conservative when it comes to things like the transformation of religion and the transformation of science even in the modern world. Hence such a dialogue in a city of intellectuals, where the rationale of these men is still deep-rooted in religious faith and pragmatic perspective towards science, is truly the need of the hour. 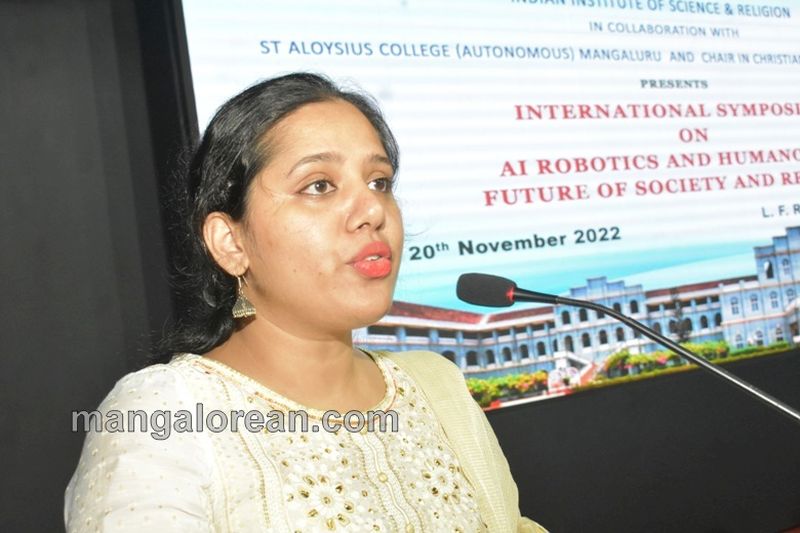 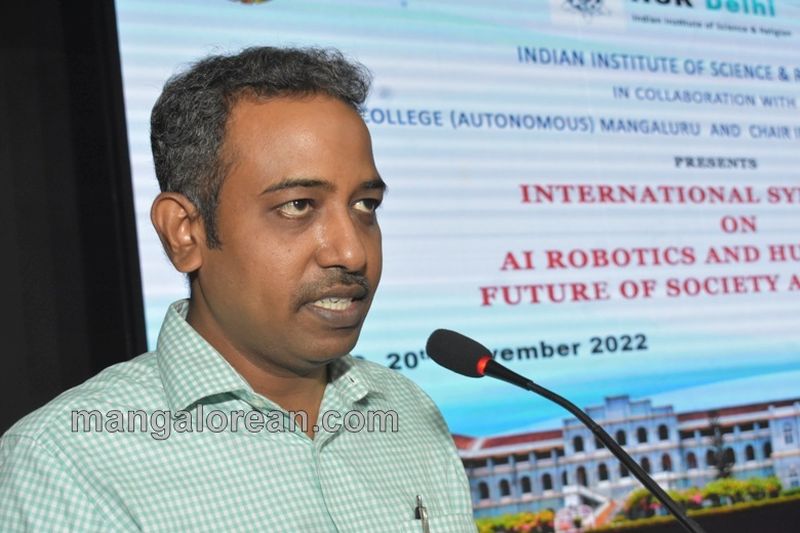 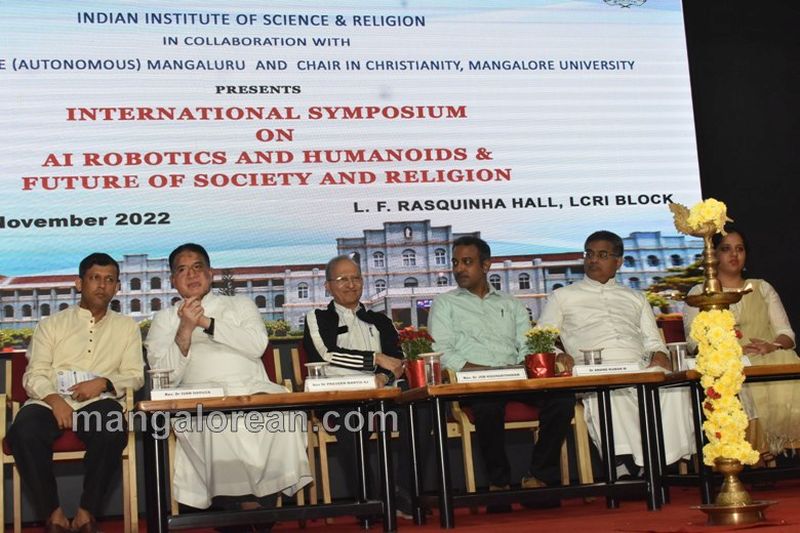 St Aloysius College is a Jesuit society-run institution for the FIRST time in its 142 years of existence has initiated such a dialogue between the oracles to reintroduce such facts of science and religion to the people of Mangaluru. To be having this great event in collaboration with the Indian Institute of science and religion which engages itself in blending the findings of modern science and the deepest insights of religions harmoniously and creatively to usher in a better world is our pleasure. The convention is also backed by the co-collaborator – Chair of Christianity of Mangalore university intends to study Christianity in a scientific manner on par with other branches of knowledge and hence intends to build a community of enlightened persons who believe in the universal brotherhood of man. No doubt all the intellectuals and participants will take away the maximum from the plethora of thoughts that shall be presented in a dialogue between the experts. 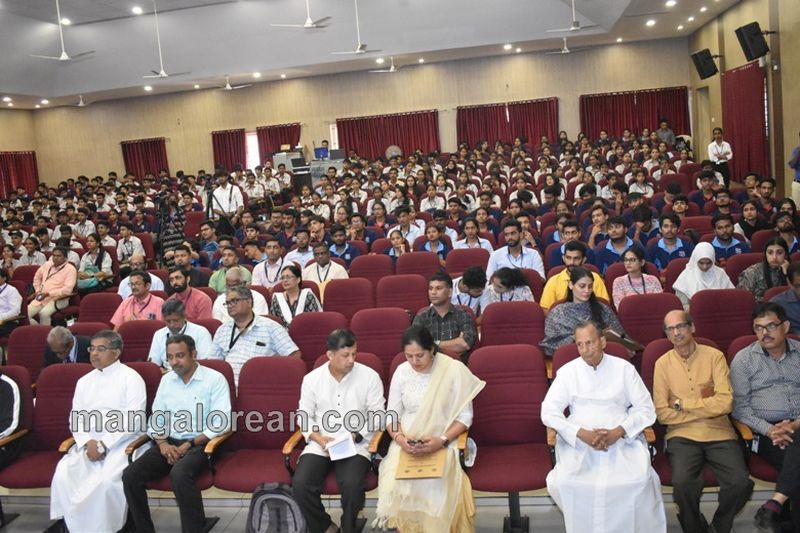 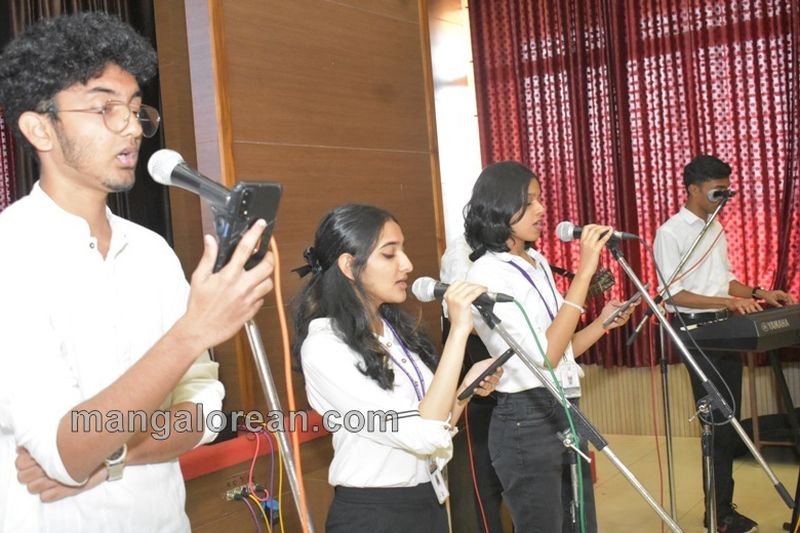 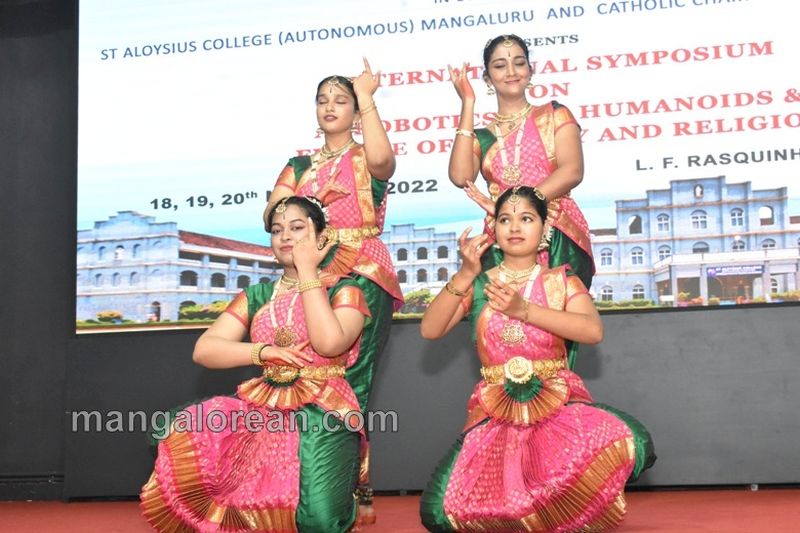 The welcome address was delivered by Rev Dr Praveen Martis SJ the principal of the college, following which Ms Flona S Soans, the convenor of the event introduced the chief guest. Dr M. Anand Kumar is working as an Assistant Professor-I in the Department of Information Technology, National Institute of Technology-Karnataka. His area of interest includes Natural Language Processing, Machine Translation systems for Indian Languages, Machine learning, and Deep Learning for Natural Language Processing and Text Analytics. He has more than 150 research articles (Scopus indexed) to his credit published in reputed international journals and conference proceedings. He has received around 1200 Google scholar citations for his research papers.

He has completed the “Computing Tools for Tamil language learning and Teaching” project funded by the Govt of Tamilnadu, the “Tamil-Malayalam Subtitle translation system” consultancy project for Sharp Software development limited and “Identification and Extraction of Question and Answers from UnStructured Documents” consultancy project with EduMinster (U.S). He also edited a Special Issue of “Neural Machine Translation.” in the Journal of Intelligent Systems. He has developed NLP tools and resources (POS tagging, Morphological analyzer, generator, machine translation) for Tamil and other Dravidian languages. He has received PK Das memorial South India’s “Best Faculty Award” (CSE- junior)-2017, Research Excellence Award from Amrita Vishwa Vidyapeetham, in Jan 2018 and the Young Scientist award-2016 in the area of NLP.

Addressing the audience, Dr M Anand Kumar said, “Robotics are beginning to cross that line from absolutely primitive motion to motion that resembles animal or human behaviour.” quote, J. J. Abrams. Fundamentally created in the early 1950s, robotics, today, is well-known as a self-operating machine with precisely trained and learned inputs, and its prevalence is omnipresent. The evolution of robotic intelligence shows a wide range of hierarchies since the time it was first created. Introduced to be deployed in factories for industrial use, it isn’t easy to find a sector where robotics is not used today. In the initial days of its advent, robots were merely designed for performing a trained set of repetitive tasks. By then, robotics was operating exclusively on Artificial Intelligence and Machine Learning” 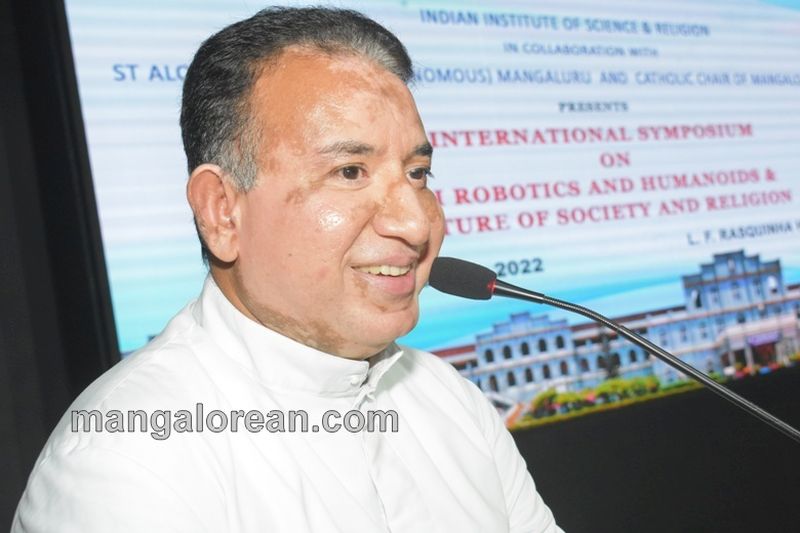 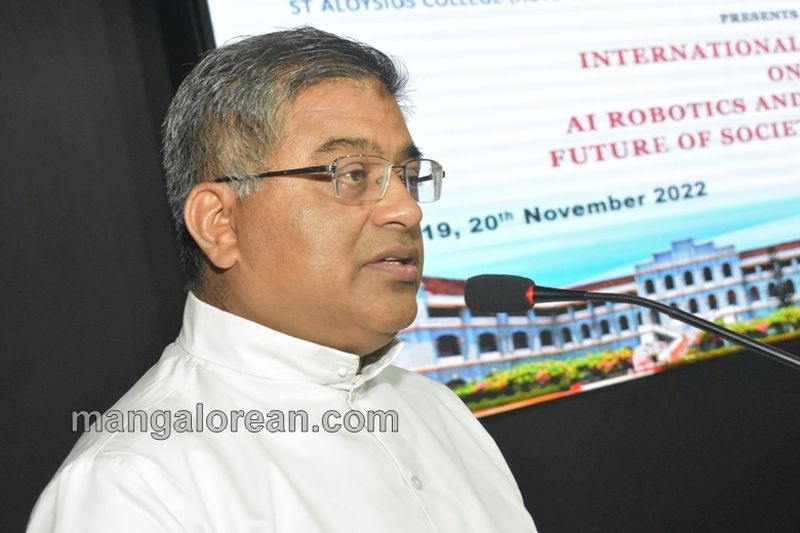 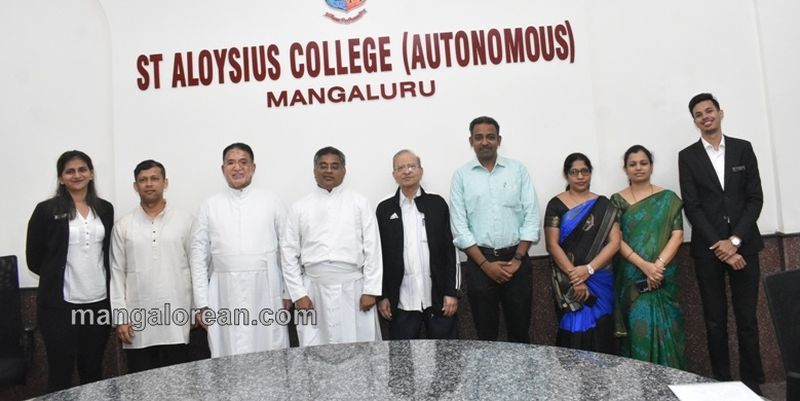 ” The 2000s trace the utilization of Artificial Intelligence in digitally programmed industrial robots. The global scenario has widely changed since then. Skilful integration of Machine Learning (AI) and robotics has been developed to advance the alleged ambit of robotic intelligence, enabling it to attain a sound human vision to detect potent stimuli. Huge algorithms and datasets go into this process of evolving the robotics potential into a human-like vision. The discipline of Artificial Intelligence and Machine Learning is as prevalent as electricity in the modern contemporary world, and thus its use in robotics is also gaining importance. Artificial intelligence teaches functions like spatial relations, grasping objects, computer vision, motion control, etc., in robots to make them understand and work on unseen data and situations. These functions can be broadly accommodated into four categories: Vision, Grasping, Motion Control, and Data” added Dr Kumar.

Dr Sonajharia Minz- Vice Chancellor of Kanha Mumu University-Dumka who was supposed to be the guest of honour, but couldn’t make it, gave her talk via zoom, which was applauded by the audience. Rector Rev Fr Melwin Pinto SJ who has upheld this great virtue of all the rectors has succeeded to imbibe values of modesty, simplicity and religious morals in every individual who becomes a part of this institution, and has undoubtedly been one of the strong pillars of establishing Jesuit values among the students, delivered his presidential address. The vote of thanks was proposed by Fr Ivan D’souza, Head of the Chair of Christianity of Mangalore university, and the programme was eloquently and meticulously compared by Ms Mishal D’souza- a student from the Department of Commerce, St Aloysi\us College.

Rev Dr Job Kozhamthadam, an ever-visionary personality, is known for his immense contribution to the field of bridging the gap between science and religion and has authored several books on the same. This symposium is the brainchild of the Fr job undertaken by the Indian institute of science and religion in Delhi. He is the Emeritus professor of philosophy of science, cosmology and science-religion, and delivered the keynote address of the symposium. Rev. Fr Job Kozhamthadam, Director, of IISR Delhi said” To be God-like has been the dream of many humans from the dawn of civilization. The incredible strides modern science has been making for the last four hundred-plus years, particularly during the last one hundred-odd years, seem to offer humans much hope that this dream is within their reach. No other breakthrough in science and technology is more reassuring in this context than Artificial Intelligence (AI), especially when accompanied by robotics and humanoid technology”.

” How can science make them conscious? More profoundly, can science make them conscious at all? At the root of it all lurks the fundamental question: what is consciousness? Once again, we have only a phenomenological understanding of consciousness. We have only certain reliable criteria or indicators to reveal that the being in question is conscious. The real nature or ontology of this phenomenon remains an enigma. Another area of concern in this context is the impact of AI-powered robots and humanoids on society. What are some of the consequences accompanying them? How is the present society going to deal with them creatively and responsibly? Can we consider these new creations persons like us humans? If so, can we take them as moral agents capable of really knowing and freely choosing their preferences?”.

” There is no doubt that some of these smart robots will be extremely helpful in the fields of industry, space exploration, advanced medical interventions, etc. It is equally certain that such facilities will be exorbitantly expensive and go beyond even the dreams of ordinary people. Chances are that the principal, if not the exclusive, beneficiaries of these new arrivals are going to be the super-rich and the super-cared for. The ordinary folks will be left only to watch and wonder! Will not this scenario further widen the divide between the haves and the have-nots? These and related issues will be studied and critically evaluated by a team of international and national scholars at the 3-day symposium” added Fr Job.