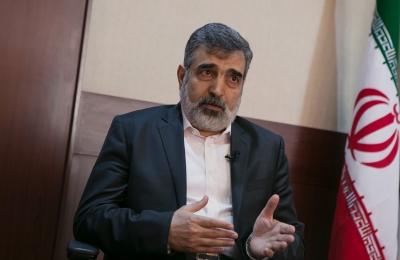 Tehran: The spokesman of the Atomic Energy Organisation of Iran (AEOI) has said that uranium enrichment constitutes only part of Iran’s nuclear activities, but the “enemies” seek to solely highlight it.

Making the remarks in an address to a meeting, Behrouz Kamalvandi on Saturday added the country has done good work in the field of producing radiopharmaceuticals and agriculture, according to the AEOI’s website.

He noted that the “enemies” do not want Iran to enter the nuclear industry at all and as a result, they seek to make the world believe that Tehran is after other objectives through its nuclear activities, Xinhua news agency reported.

The AEOI spokesman said the US claim that foodstuff and medicine are not in the list of sanctions on Iran is a “lie”.

In September, the International Atomic Energy Agency (IAEA) said in a report that it was “not in a position to provide assurance that Iran’s nuclear program is exclusively peaceful” and that “no progress” has been made in resolving questions about the past traces of nuclear material in Iran’s “three undeclared sites”.

Slamming the IAEA for the report, Kamalvandi added at the time that it was a repetition of previous “baseless cases” with “political purposes”.

In June, the IAEA’s Board of Governors adopted an anti-Iran resolution proposed by the US and three European countries, Britain, France, and Germany, accusing Iran of non-cooperation with the agency.

Following the move, Iran began injecting uranium gas into advanced centrifuges and disconnected some of the IAEA’s cameras monitoring its sites.

Iran signed a nuclear deal with world powers in 2015, accepting to put some curbs on its nuclear activities in return for the removal of the international sanctions on Tehran. In May 2018, however, the US pulled out of the agreement and reimposed Washington’s sanctions on Tehran, prompting the latter to reduce its commitments under the deal.