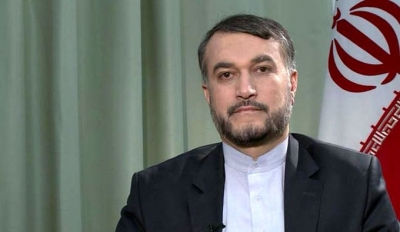 Iran says US ‘expressed its hastiness’ to reach nuke agreement

Tehran: Iranian Foreign Minister Hossein Amir-Abdollahian has said his country has received a message from the US expressing American “hastiness to reach the nuclear deal with Iran”.

“Three days ago, we received a message from the US, and told them that the (International Atomic Energy) Agency (IAEA)’s accusations against Iran’s nuclear programme should be resolved before any agreement,” Abdollahian said in the Armenian capital of Yerevan, official IRNA news agency reported.

Asked about US officials’ comments about the nuclear negotiations being off the US agenda, he said “Americans are contradictory in their words and behaviour, as they are in a hurry to reach the agreement in their (recent) message”, Xinhua news agency reported.

“While the US continues to exchange messages with Iran, they are seeking to exert political and psychological pressure (on Iran) and want to gain concessions in the negotiations,” he said.

“We do not give any concessions to the American side, and we move within the framework of logic and the framework of an agreement that respects the red lines of the Islamic Republic of Iran, but at the same time we never leave the negotiating table,” he stressed.

Iran signed the nuclear deal, formally known as the Joint Comprehensive Plan of Action (JCPOA), with world powers in July 2015, agreeing to curb its nuclear program in return for removing sanctions on the country. However, Washington quit the agreement and reimposed sanctions on Tehran.

The talks on the JCPOA’s revival began in April 2021 in Vienna, Austria. No breakthrough was achieved after the latest round of Vienna talks held in early August.