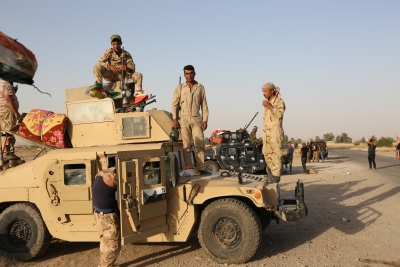 Baghdad: Iraqi militia leaders on Sunday called for the withdrawal of foreign forces from Iraq on the first anniversary of a US drone strike that killed two senior commanders of Shiite militias.

During a rally of thousands of supporters of Hashd Shaabi forces at al-Tahrir Square in downtown Baghdad, Hadi al-Ameri, head of Iran-backed Badr Organization, told the demonstrators “the government must abide by its pledges to remove all foreign forces, especially the US forces, according to a timetable.”

“The stability of the region depends on the stability of Iraq, and the latter can only be stabilised with the departure of all foreign forces from its lands,” al-Ameri said during the rally to mourn the death of the Iranian commander Qassem Soleimani and deputy chief of Iraq’s paramilitary Hashd Shaabi forces Abu Mahdi al-Muhandis, the Xinhua news agency reported.

Falih al-Fayadh, head of the Hashd Shaabi forces, told the rally that the retaliation for the killing of the two Shiite leaders will be through “implementation of the decision of the Iraqi Council of Representatives (parliament) to remove the US forces.”

Iraq’s full sovereignty and withdrawal of the U.S. forces are “a matter that cannot be compromised,” said al-Fayadh during the rally of Hashd Shaabi supporters, who chanted “revenge” and “no to America.”

Many demonstrators raised Iraqi flags, posters of Soleimani and al-Muhandis, and held banners saying “the will of free peoples is stronger than the US aggression.”

The rally was held under tight security measures, as the security forces deployed throughout the capital in the past few days blocked many main roads in the city, which was expected to witness demonstrations condemning the assassination.

The US drone strike on January 3, 2020 caused an escalation of tensions between Iran and the United States in the region.

The airstrike prompted the Iraqi parliament to pass a resolution requesting the government to end the presence of foreign forces in the country.