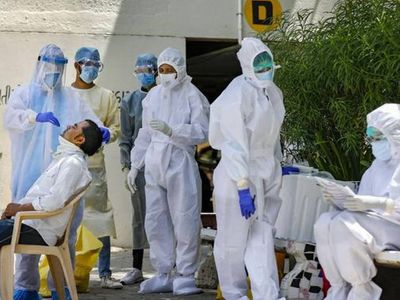 Dublin: The total number of confirmed Covid-19 cases in Ireland has exceeded 1,10,000 as another 5,325 cases and 17 Covid-19-related deaths were reported on Tuesday.

A total of 1,13,322 confirmed cases have been reported in Ireland, and 2,282 people have died from the disease in the country since the beginning of the pandemic, said the Irish Department of Health in a statement, the Xinhua news agency reported.

According to the statement, as of 2 p.m. on Tuesday, 840 Covid-19 patients in the country were hospitalised, and 76 of them were receiving medical treatment in intensive care units.

Local media RTE on Tuesday quoted public health officials as saying that the number of the Covid-19 patients hospitalised in the country is likely to surpass the first wave peak by the end of this week.

The highest number of Covid-19 hospitalisations in Ireland was recorded at 881 in mid-April 2020 when the country was hit hardest by the first wave of the pandemic, according to the RTE report.

Earlier in the day, Irish Prime Minister Micheal Martin told RTE in a TV program that the spike of Covid-19 cases in the country has “exceeded any expectation,” prompting the government to consider taking further actions to control the spread of the disease.

Options on the table include possible delay in reopening local schools till the end of January, closure of some manufacturing and construction services and further limiting people’s movement, he said.

Ireland is currently on a Level-5 or the highest-level response to the pandemic, under which people are only permitted to move a maximum of five kilometers away from home if without essential needs and all the non-essential retail outlets have to be closed.

In the interview, Martin also said that up to 1,35,000 people in Ireland will likely be vaccinated with two doses of Covid-19 vaccine by the end of February, which roughly accounts for less than 3 per cent of the country’s total population.

As the world is struggling to contain the pandemic, vaccination is underway in Ireland and some other countries with the already-authorised coronavirus vaccines.

Meanwhile, 232 candidate vaccines are still being developed worldwide — 60 of them in clinical trials — in countries including Germany, China, Russia, Britain and the US, according to information released by the World Health Organization on December 29.