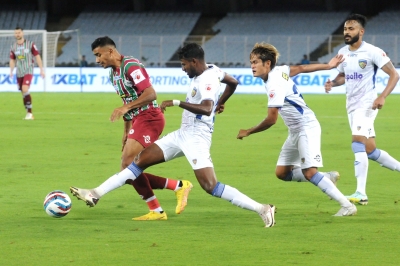 Chennaiyin’s Ghanaian striker Karikari (64th minute) scored a goal off penalty on his ISL debut before Rahim (83rd) struck home the winner. Manvir Singh (27th minute), on the other hand, netted the lone goal for the hosts.

Playing in front of the home fans, the 26-year-old striker put ATK Mohun Bagan in the lead by striking the opening goal. With a counter-attacking display by the Mariners, Manvir successfully converted a pass from Dimitri Petratos, leaving Chennaiyin FC goalkeeper Debjit Majumder with no chance as ATK Mohun Bagan ended the first-half with 58 percent of the ball possession.

Anirudh Thapa-led side came back aggressively after the break, creating more pressure on the opposition defence line.

They were soon rewarded for their attacking display when substitute player Karikari brought the ball into the penalty area before the opposition goalkeeper Vishal Kaith committed an error. Karikari made no mistake while taking the penalty kick and beautifully produced an equaliser for his side.

The goal shifted the momentum towards Chennaiyin as they continued to create opportunities before Rahim doubled the score for them. Edwin Sydney Vanspaul sent a good pass forward on the right wing to Karikari, who then cut the ball back to Rahim before the Indian found the far corner with a wonderfully placed shot to score the winner.

After the winning start to the campaign, Chennaiyin FC will now travel back home to Chennai for their next game against Bengaluru FC at the Jawaharlal Nehru Stadium on Friday. It will be a homecoming for Thomas Brdaric’s men, who return to the city to play an ISL game after two years.

Owing to the Covid-19 pandemic, the last two seasons of the league were conducted behind closed doors in Goa. However, it has returned to its traditional home and away format in the ongoing season with the fans cheering for their favourite teams and stars from the stadiums.