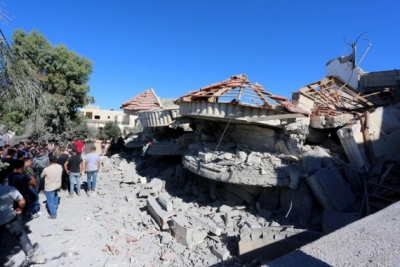 United Nations: Israeli forces this week confiscated the homes of 84 Palestinians in Ramallah Governorate and a structure accommodating a family of eight in the northern Jordan Valley, the UN humanitarians said.

The Israeli military took at least 49 structures in the Ras al-Tin, Ramallah Governorate displacement on Wednesday, the UN Office for the Coordination of Humanitarian Affairs (OCHA) said in a statement on Friday.

The herding community moves to Ras al-Tin every summer for grazing but now is at heightened risk of forcible transfer from the area.

In the Thursday action in Humsa-Al Bqai’a in the northern Jordan Valley, the forces confiscated a recently installed structure used by a family, including six children, who lost their previous homes in another incident last week, OCHA’s ReliefWeb reported.

“The UN has repeatedly called on Israel to halt its demolition and confiscation of Palestinian property and bring its conduct in line with its obligations as an occupying power under international humanitarian law,” OCHA said.

“The Israeli authorities have demolished, seized or forced people to demolish at least 474 Palestinian-owned structures, including 150 donor-funded ones, displacing 656 people, including 359 children, across the West Bank” this year, OCHA said.