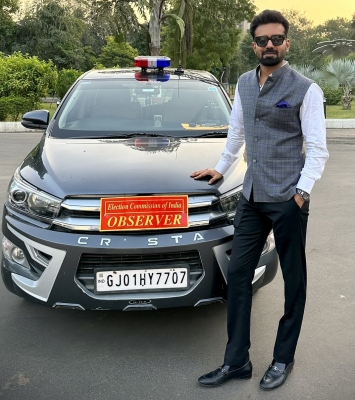 It’s ‘neither publicity nor a stunt’, says IAS officer after EC move

Abhishek Singh, the IAS officer who was barred from election duty for sharing his posting on Instagram, said that it was “neither publicity nor a stunt”.

New Delhi: Abhishek Singh, the IAS officer who was barred from election duty for sharing his posting on Instagram, said that it was “neither publicity nor a stunt”.

Taking to Twitter on Friday night, he said: “I accept the Hon’ble ECI’s decision with all humilit . Though I believe there’s nothing wrong in this post. A public servant, in a car bought by public’s money, reporting for public duty, with public officials, communicating it to the public. It is neither publicity nor a stunt!”

His remarks came hours after the Election Commission said that it removed Singh from election duty after he shared his posting as General Observer on the social media platform.

“Now, it has come to the notice of the Commission that Sh. Abhishek Singh, IAS (UP:2011) has used social media platform ‘Instagram’ for sharing his posting/joining as General Observer and used his official position as a publicity stunt,” the EC said in its order.

“Abhishek Singh, is, therefore, directed to leave the constituency immediately, latest by today i.e. 18.11.2022 and report to his Nodal Officer in the parent cadre. Further, all government facilities provided to the officer to facilitate the discharge of his observer duties shall be withdrawn accordingly by the District administration.”

Singh was appointed as General Observer for Assembly Constituency 49-Bapunagar and 56-Asarwa of Gujarat’s Ahmedabad district.