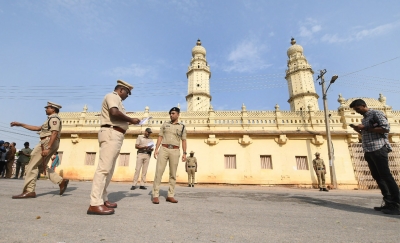 Bengaluru: Jamia Mosque row in Karnataka has come to the forefront with Bajarang Dal submitting a PIL in the High Court demanding to vacate it. The PIL claimed that there are proofs that the mosque was once a Hindu temple.

“There are traces of Hindu gods and temple structure in the Jamia Mosque of historical Srirangapatna town in Mandya district. Hence, the mosque should be vacated immediately and also, Hindu devotees should be allowed to take bath in the kalyani (traditional water body) located in the premises of the mosque,” the petition stated.

Bajrang Dal activists have further demanded resurvey of the mosque on the lines of Gyanwapi masjid. The PIL was submitted on Wednesday by the state President of Bajrang Dal Manjunath. Including Manjunath, 108 devotees of Hanuman have petitioned.

The number 108 is considered as auspicious in Hindu tradition and hence, 108 devotees have become parties, Bajrang Dal sources explain.

The Bajrang Dal activists have also given proof of the Mysore Gazetteer, Hindu architecture in mosque, inscription of Hindu idols, the sacred water body and references of British officers to the court.

Earlier, Hindutva groups had sought nod from authorities to conduct prayers in the mosque. The issue had become a hot topic in the state.

The mosque authorities have already made several appeals to concerned authorities to protect the Jamia mosque from Hindu activists.

Jamia masjid also called as Masjid-i-Ala, is located inside the Srirangapatna fort. It was built in 1786-87, during the rule of Tipu. The mosque has three inscriptions that mention nine names of Prophet Mohammad.

Narendra Modi Vichar Manch had made submissions to authorities for survey of the mosque, and maintain that they strongly believe with evidence that Jamia masjid was built after razing down Hanuman temple.