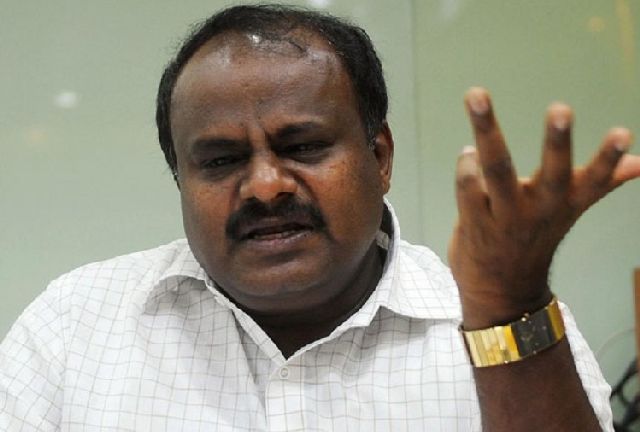 Bengaluru: Hours after deputy chairman, S. L. Dharme Gowda’s body was found on a railway track, Janata Dal (S) second-in-command, H. D. Kumarswamy on Tuesday demanded that a fact-finding committee must be constituted to find out the real reasons behind his death.

Kumaraswamy told reporters that Gowda was truly upset with the incidents that had led to abrupt sine die of the Legislative Council, since two weeks. “This is politically conspired murder. Those who pulled, shoved and dragged Gowda must question their own conscience, whether what they have done is right or wrong?” he questioned.

Although he blamed Congress party for Gowda’s death, Kumaraswamy was very careful in his words by neither naming any leader nor naming the party directly. All throughout, he maintained those who dragged Gowda from the chair must answer questions.

He explained that incumbent Legislative Council chairman (K. Pratapchandra Shetty) had issued a showcause notice to Legislative Council secretary, Mahalakshmi, who had recently submitted a one and half page report which apparently blamed Gowda for the ruckus.

Kumarswamy added that Gowda had gone into depression since this report came out three days ago. “JD(S) supremo, H. D. Deve Gowda and myself tried to convince him that ‘he had not made any mistake’ (by occupying the chair prior to stoppage of quorum bell) but he had reluctantly accepted it. Besides this, the Chairman had constituted a fact-finding committee headed by our party leader Maritibbe Gowda to know the reasons behind the ruckus,” he explained.

He added that among two brothers Bhoje Gowda and Dharme Gowda, the latter was always very sober and soft-spoken. “He used to spend most of his free time in a farm house and engaged himself in farming. Whereas Bhoje Gowda was always a rebel among the two,” he said while recalling his long association with both brothers.

Meanwhile refusing to comment, Karnataka Pradesh Congress Committee president, D. K. Shivakuamr said that he does not wish to react to Kumarswamy’s allegations. “He must be upset, when he has lost his friend. He may have emotionally spoken if he has made any such remarks. I do not wish to react to these type allegations at this juncture,” he said.

The ruckus in the council had followed the attempt by the ruling BJP and JDS to take up the no-confidence motion against Shetty, despite it not finding mention in the day’s agenda.

Shetty had rejected the notice for the motion citing procedural lapses and pointing out that no specific charges were made against him.

However, insisting on going ahead with it, the BJP and the JDS had attempted to take up the motion by seating the Deputy Chairman on the chair.