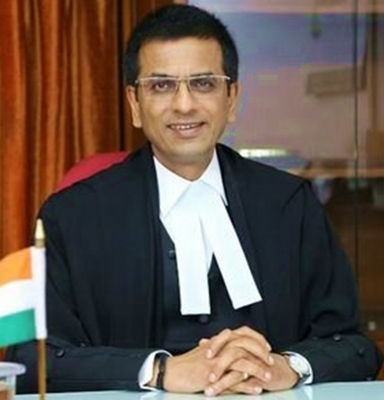 Justice Chandrachud will be sworn in as India’s 50th CJI on November 9.

Law Minister Kiren Rijiju, in a tweet, said: “In exercise of the power conferred by the Constitution of India, President appoints Dr. Justice DY Chandrachud, Judge, Supreme Court as the Chief Justice of India with effect from 9th November, 22”.

On October 11, the Chief Justice of India U.U. Lalit named Justice Chandrachud, the seniormost judge in the Supreme Court, as his successor.

CJI Lalit, who will retire on November 8, had, in presence of all Supreme Court judges, handed over the letter of recommendation to Justice Chandrachud.A

Justice Chandrachud, who will hold office till November 10, 2024, is the son of former Supreme Court judge Y.V. Chandrachud, who was the longest-serving CJI, being in office for about seven years and four months between 1978 to 1985. During his tenure, Justice D.Y. Chandrachud overturned two judgments of his father – which were related to adultery and the right to privacy.

Justice Chandrachud, who is a PhD from Harvard Law School, is known as a non-conformist judge. He has played a key role in introducing virtual hearings during the Covid time, which has now become a permanent feature. He has been part of the landmark judgments on Ayodhya title dispute, decriminalisation of homosexuality, adultery, privacy, entry of women into Sabarimala etc.,

Justice Chandrachud practised in Bombay High Court and the Supreme Court. He passed BA with honours in economics from St Stephen’s College, New Delhi and completed LLB from Campus Law Centre, Delhi University. He also served as Additional Solicitor General of India from 1998 till 2000. He was first appointed as judge of the Bombay High Court on March 29, 2000.

Justice Chandrachud has also served as Chief Justice of the Allahabad High Court since October 31, 2013 until his elevation as an apex court judge on May 13, 2016

Justice ChandrachudAhas been a visiting Professor of Comparative Constitutional Law at the University of Mumbai and at Oklahoma University School of Law, USA. In June, 1998, he was designated as senior advocate by the Bombay High Court.

The Centre, as per Memorandum of Procedure, asks the outgoing CJI to name the successor, just before a month of retirement. Law Minister Rijiju, on October 7, sent a letter to Chief Justice Lalit to make recommendation for appointment of his successor.