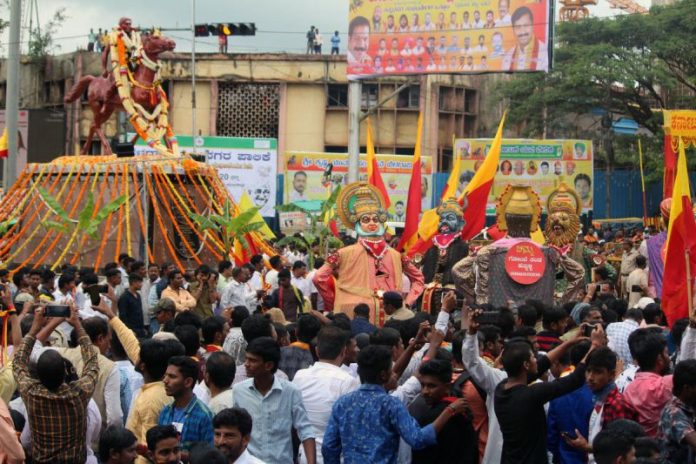 The border district of Karnataka, Belagavi is ready for another showdown on the occasion of the Kannada Rajyotsava on Tuesday (November 1), celebrated to mark the formation of the state.

Belagavi:  The border district of Karnataka, Belagavi is ready for another showdown on the occasion of the Kannada Rajyotsava on Tuesday (November 1), celebrated to mark the formation of the state.

Maharashtra Ekikarana Samithi (MES), which opposes the merger of Belagavi district with Karnataka and demands its union with Maharashtra, is observing black day to mark the occasion.

Meanwhile, the Karnataka government and Kannada activists have planned a grand celebration of Kannada Rajyotsava across the state, especially in Belagavi. The Karnataka Police Department were on their toes over the turn of events and were ensuring tight vigilance and police security cover across the Belagavi city and district.

According to police, the monitoring of the situation will be done by three DCP’s, 12 ACP’s, 52 Police Inspectors and more than 3,000 police personnel have been deputed across the sensitive regions in the city and district.

The MES was founded in 1948 with the sole objective of ensuring that Belagavi becomes part of Maharashtra. The MES found popular support in Belagavi city and its MLAs were also elected from Belagavi district.

The MES party MLAs have been demanding the merger of Belagavi district with Maharashtra in the Karnataka Legislative Assembly, causing severe embarrassment to the successive governments. However, the Congress and BJP parties in Karnataka managed to win their candidates and ensured defeat for the MES candidates in the local as well as the recent Assembly elections.

The coalition government of BJP and JD S) headed by then Chief Minister H.D. Kumaraswamy constructed “Suvarna Soudha” at Belagavi and started holding winter Assembly sessions to give a message that Belagavi will remain an integral part of Karnataka. However, MES party workers have continued to pursue their agenda.