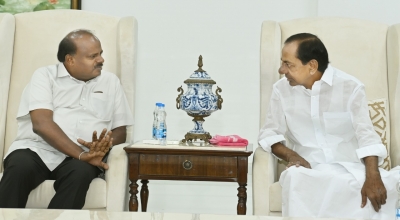 Bengaluru: The Janata Dal-Secular on Thursday claimed that K. Chandrashekar Rao’s new Bharatiya Rashtriya Samithi (BRS) would support it in the upcoming Assembly elections in Karnataka.

Party leader and former Chief Minister H.D. Kumaraswamy told reporters that the BRS is not keen to field its candidates in Karnataka polls and decided to support his JD-S. But, for the 2024 Lok Sabha elections, KCR is contemplating contesting in more than 150 seats. As part of this, he would field his candidates in a few border regions of the state, Kumaraswamy added.

“Along with our legislators, many issues have been discussed with Telangana CM Chandrashekar Rao. Everything can’t be told openly. KCR had told me that he had seen my administration for 20 months during 2006 and appreciated it for ruling without any black marks. He advised us to continue on the same path,” he said.

“We are coming together against the atrocities on Dalits and to give succour to farmers. It will be made as the common minimum programme and we will go ahead,” he said.

Kumaraswamy also declared that he welcomed the transformation of TRS into a national party BRS. “In the coming days, we will work with KCR,” he underlined.

He stated that if JD-S is voted to power, the party would emulate the programmes like Raita Bandu, and Dalit Bandhu, which are implemented in Telangana. Under the Raita Bandhu scheme, 24 hours free electricity and Rs 10,000 subsidy per acre is given. In case of the death of a farmer, Rs 5 lakh insurance amount is given through LIC, Kumaraswamy said.

Under Dalit Bandhu, the Telangana government is giving Rs 10 lakh subsidy for Dalits to carry out work independently. The amount would be credited to their accounts directly from the government. KCR had asked to send a delegation to study these programmes and add them in the election manifesto, Kumaraswamy stated.

He further noted that the elections in Karnataka would make a big impact at the national level. KCR has influence in 15 to 20 Assembly seats in the state. Many legislators have forged relationships with Telangana. “We have won four seats in Hyderabad Karnataka region. In the upcoming Assembly elections, we might win at least 15 to 20 seats there,” he said.