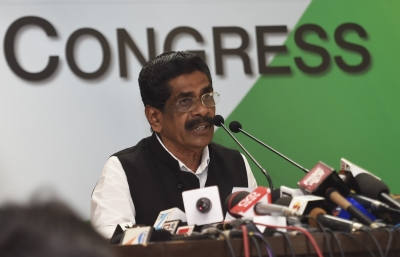 Thiruvananthapuram:  The Muslim League on Monday hit out at state Congress Chief Mullappally Ramachandran for saying that there will not be any further alliance with the Jamaat-e-Islami’s Welfare Party.

Ramachandran on Sunday said the discussions that Congress leader and UDF convenor M.M. Hassan had with the Welfare Party leaders before the local body elections had led to the UDF getting isolated in the state.

In the recently held local body polls, the Congress and the UDF received a major drubbing. And the party insiders have been blaming the alliance with the Welfare Party for this.

The League leadership in a statement said the UDF is a political front in which there are several political parties, and added that the state Congress chief cannot unilaterally speak on such a subject.

Both the CPI(M) and the BJP had campaigned extensively in the state against the Congress and UDF entering into a subtle alliance with the Welfare Party. This, according to the senior Congress leaders, was one of the prime reasons for the major drubbing the UDF and Congress faced in the local body polls even though the ruling Left Democratic Front (LDF) government was in a spot over the corruption scams and gold smuggling scandal.

This huge victory in the local body polls has led to the CPI(M) and the Left Front getting more confident for the 2021 Assembly elections.

Another major factor, which the Congress and UDF faced was the stand taken by the various Christian denominations. The Congress and UDF have always been a preferred alliance for the Christian community, which used to get maximum seats from Central and South Kerala where there is a predominant Christian strength.

However, the truck with a Jamaat-e-Islami’s Welfare Party has led to a major shift in the Christian community’s vote towards the LDF and even to the BJP. The mouthpiece of the Catholic church, ‘Sathyadeepam’ has already come out against the Congress entering into an alliance with the Welfare Party.

“We have to iron out differences, but KPCC president Mullappally Ramachandran does not have any right to speak on behalf of the UDF and if there is any issue related to Welfare Party, then it is for all the UDF leaders to discuss and then come out with a statement”, a senior leader of the Muslim League told IANS on conditions of anonymity.