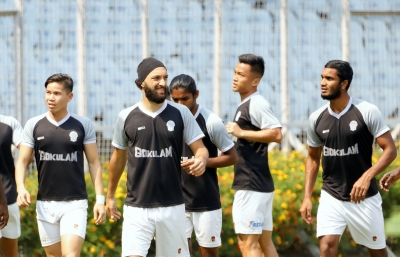 Kolkata: Gokulam Kerala will take on Tiddim Road Athletic Union (TRAU) in the final match day on Saturday at the Kishore Bharati Krirangan as both sides aim for the maiden I-League title.

After 14 rounds of games, three teams will be battling for the title — Gokulam Kerala, Churchill Brothers, and TRAU. All three sides have 26 points and are only differentiated by their head-to-head results.

The equation is simple for Gokulam Kerala. Vincenzo Annese’s side needs to beat TRAU, and they will secure their first-ever I-League title as the Malabrians lead second-placed Churchill Brothers on head-to-head record (0-2 loss, 3-2 win vs Churchill). They could also secure the championship with a draw if Churchill loses their game to RoundGlass Punjab.

However, GKFC head coach Vincenzo Annese would rather prefer his team finish the job by beating TRAU.

“This is a final for us, and we need to win this game. We are too excited, we cannot relax. The mood is fine, but we have just one thing on our mind- we need to win this game. All our hard work, strengths, training sessions, formation — has led us here. Now, we have to finalise a few things. We have worked very hard to be here. This is a final game, many things can go wrong. We need to limit things we cannot control. We need to focus completely on the game and keep preparing ourselves continuously,” Annese said at the pre-match press conference.

“We beat TRAU seven games ago. It will be totally different as they will have Helder Lobato back in defence. They have quality in counterattacks. They are organised in defence, and quick in front of goal. Their two excellent midfielders, Phalguni and Kishan Singh, who are brilliant passers of the ball and the team can run for the whole 90 minutes,” he added about his opponents.

Midfielder Mohammed Rashid said: “It is a dream-come-true for all players to be fighting for the I-League title. All of us are focused, well-rested and prepared. We are positive that we will be taking the trophy home at the end of tomorrow.”

Like Gokulam, TRAU faces a similar equation for lifting the I-League. If Nandakumar’s boys can beat Gokulam, they are likely to lift the trophy, even if Churchill beat RoundGlass Punjab in the other game. The Imphal-based club drew both their games with Churchill Brothers, but have a superior overall goal difference which would hand them the title.

However, it will not be an easy task for the Red Pythons as the Malabrians hold the edge over them. Emil Benny’s strike in the first half coupled with Sharif Mohammad’s and Zodingliana Ralte’s second-half strikes helped Gokulam to a 3-1 win over TRAU back when the two sides clashed.

At the pre-match press conference, head coach Nandakumar said, “We have been preparing well and we are in a very good mindset before the game. I have also said earlier that with the talent of the players, we would surprise many in the tournament. Since the start, our aim was to be in the top-six. Being in the title race is a bonus.”

“I cannot predict the result, but I can say my team is looking forward to playing this last game — a title-deciding match for us. I am sure they will give their 100 percent for the I-League title. Whatever the result, I will be a very happy man,” he said.

“Gokulam are one of the strongest teams. Their strike force is too good and composed in front of the goal. They have a good energetic coach leading a good set of players. They have many players who play in different positions, and it will be difficult to adapt to them. It will be a tough game against strong opposition.”

Goal-keeper Amrit Gope has put up some defying performances in goal for TRAU. “We all are motivated after the last game and we have been looking forward to the game against Gokulam Kerala. We know we need to win this game, which will give us the championship. I believe the whole team is motivated and fired up for a win,” he said.