Home Mangalorean News Local News Keralites from ‘God’s Own Country’ Dump their Garbage in ‘Rome of the... 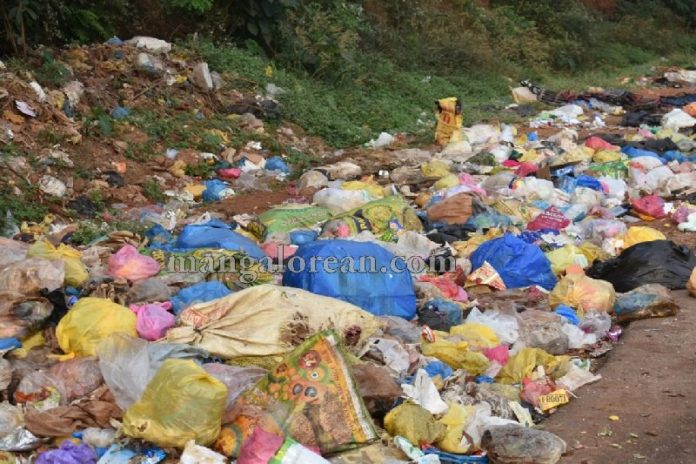 Keralites from ‘God’s Own Country’ Dump their Garbage in ‘Rome of the East’-Mangaluru’!

Mangaluru: If you drive or ride from Talapady towards Mangaluru you will be welcomed by colourful piles of garbage along the side of the NH 66. The garbage not only includes household waste but also waste from footwear companies, also bio-medical waste, plastic and electronic waste from Kerala being illegally transported across the border through trucks and dumped across ‘Rome of the East” aka Mangaluru, Dakshina Kannada. While the state pollution control board and district authorities have flagged the violation repeatedly, the vehicles continue to get through by bribing the guards at the border check-posts and then dump the waste in DK areas. One petty shop owner located on NH 66 said that he daily notices vehicles bearing KL registration throw garbage along the roadside, and flee before they could be captured on the mobile phones. 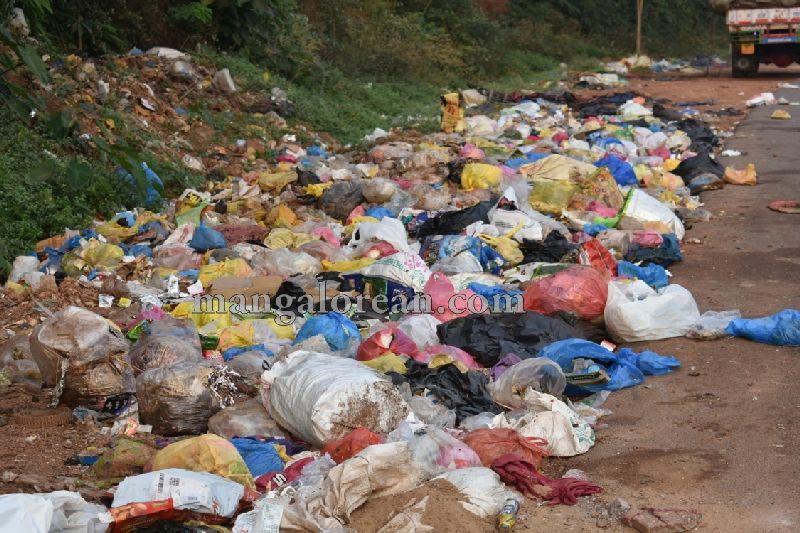 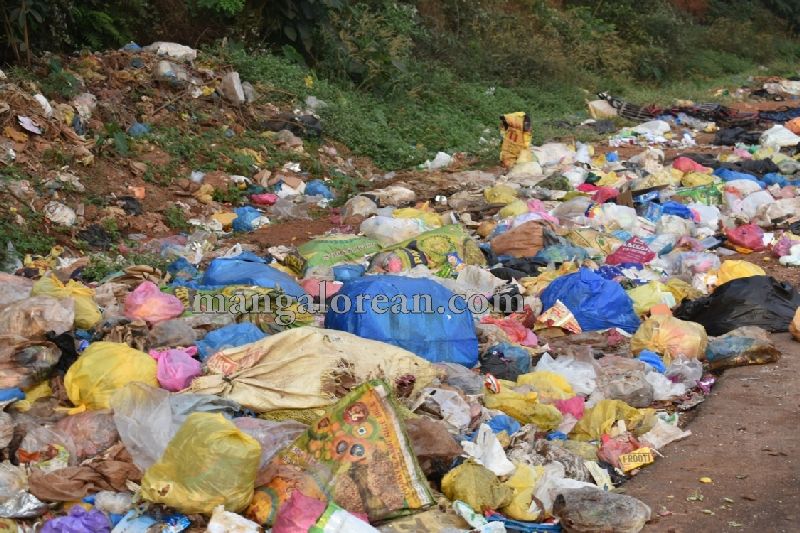 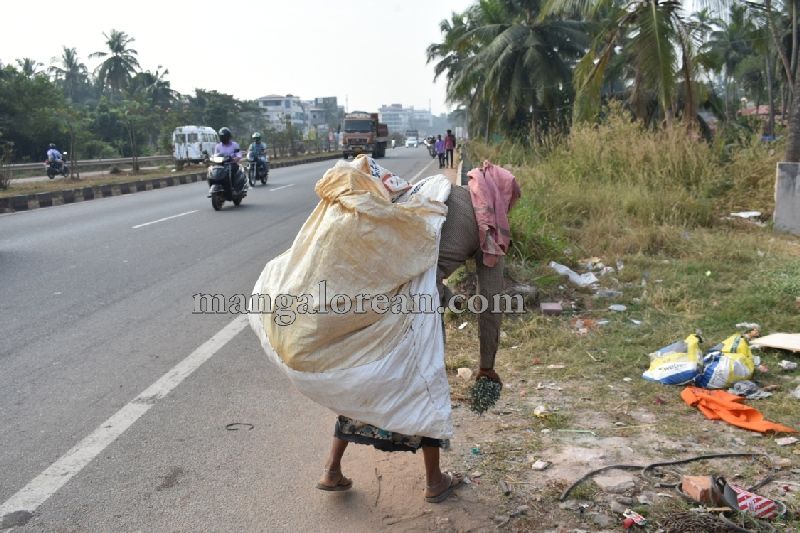 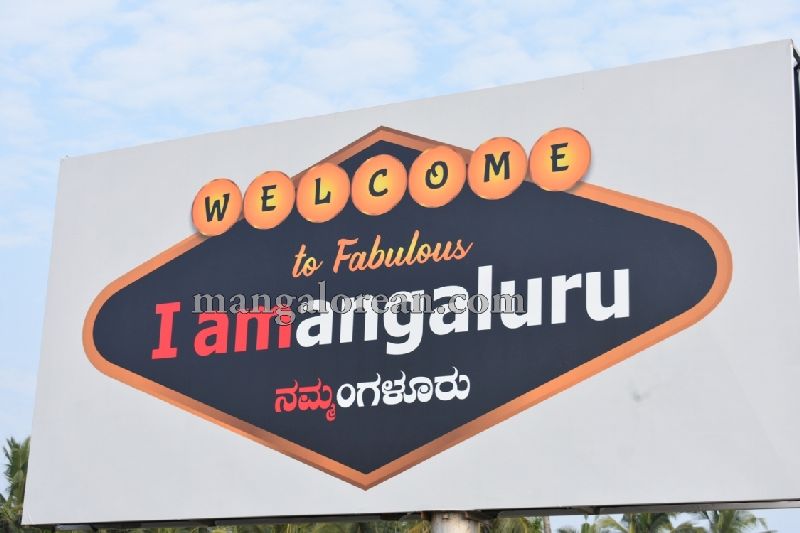 It is learnt that the truck drivers collect waste – biomedical products, e-waste, plastic, used liquor bottles, clothes and paper – from hospitals, hotels and local businesses in Kerala and conceal it under secured tarpaulin sheets. Sources reveal that evasion is not of essence, though: officials in Karnataka admit palms are greased liberally at the checkposts so trucks get free passage more or less. The waste is then dumped in various places after they reach in and around Thokkuttu area and beyond. You can also find heaps of garbage dumped near the Nethravati Bridge going towards Mangaluru., including on agricultural land, raising fears of contamination of groundwater and spread of diseases due to improper disposal of medical waste and other toxic materials. 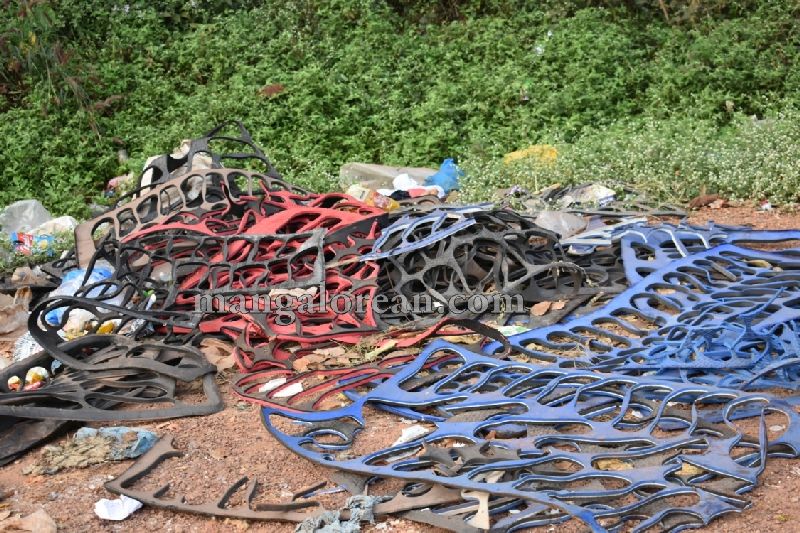 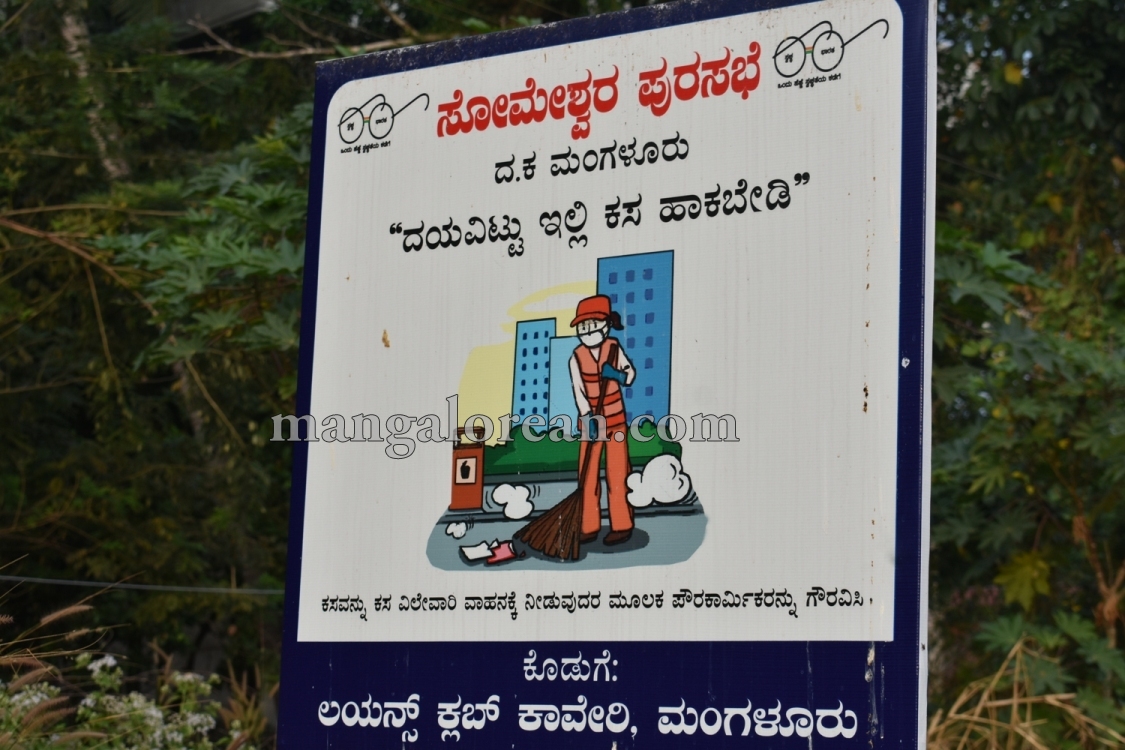 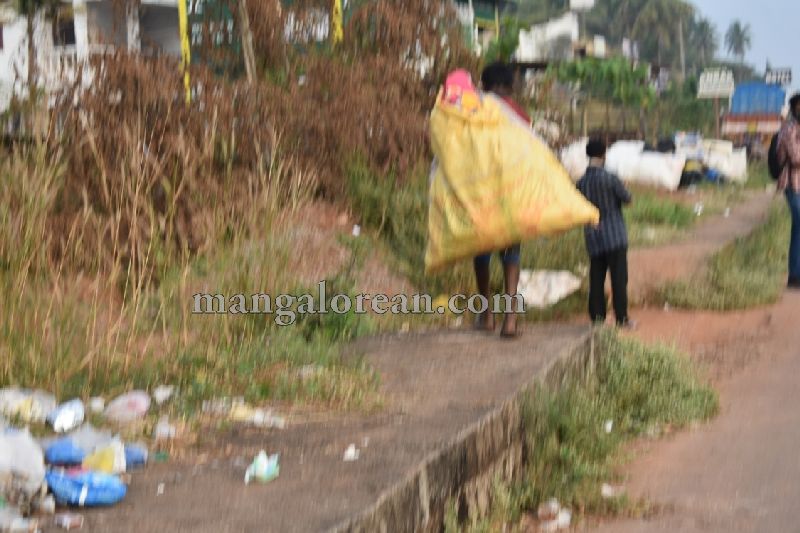 Such dumping of waste from Kerala into Karnataka has been going on since years, and no concerned authorities have taken any action- You Know Why? Bribe is the answer! And the illegal activity continues without any hindrance. Sources reveal that the racket that is going on, includes prominent politicians, hospital owners, businessmen and hoteliers in Kerala. Residents have filed several complaints about the risk to public health and environment from the proliferating garbage heaps. “Under the existing law, violators are punished under a compoundable offence (where charges can be dropped) and they get scot-free by paying a meagre fine. They become repeat offenders as there is no deterrent.

Apart from Keralites dumping waste here, it is also noted that as the population increased, and also apartments/education institutions/hotels etc have increased, the quantity of waste also doubled but the concerned authorities have failed to find a place to dump garbage for the people here living along the NH 66 and also those travelling on that highway. This stretch of highway gives an unusual view of garbage scattered all over the place. The road, which is a state highway shows the irresponsibility of representatives. I even witnessed people tossing out garbage from the moving vehicles, and also residents and shops employees dumping garbage along the roadside, and stray dogs, including crows and birds, feast on this garbage. Among the garbage, you could also find used syringes, cotton, medicine bottles/ used tablets wraps etc thrown by some hospital or hospitals in that vicinity.

Speaking to Team Mangalorean, one activist from Beeri said, “This problem has been persisting from past so many years and a committee was set up to overcome this problem, and even complaints were forwarded to DC, then minister U T Khader and other concerned authorities, but until now no action has been taken, and therefore garbage gets piled up every single day. And once in a while, this garbage gets burnt by some people from the department. The problem can be solved only if the government representatives take up the responsibility and people also should unite. Our MLA U T Khader who got elected from Ullal constituency is also least bothered about this issue, it seems like”. 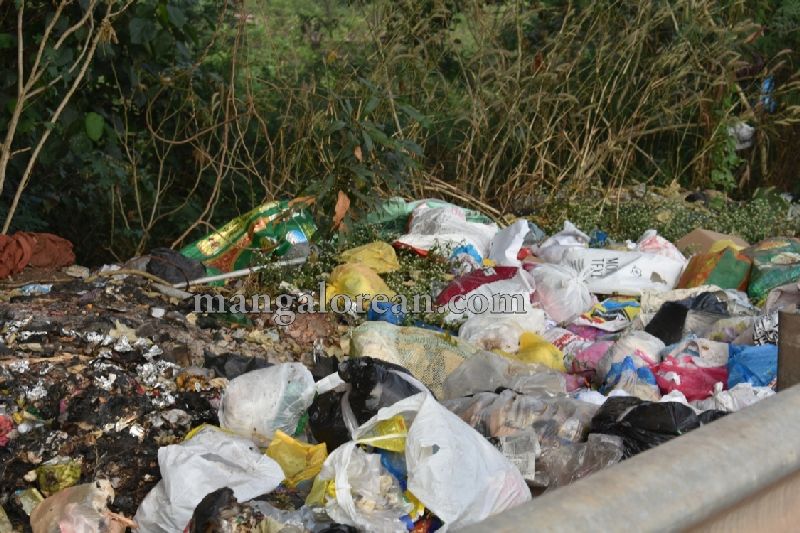 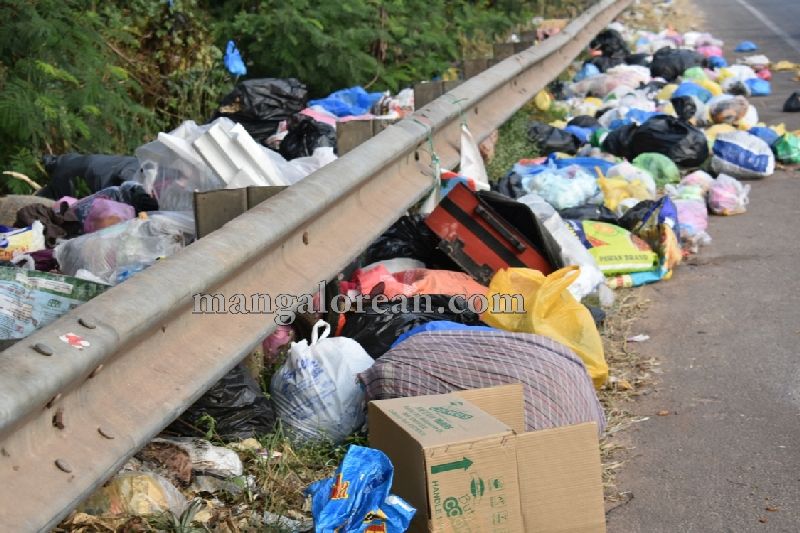 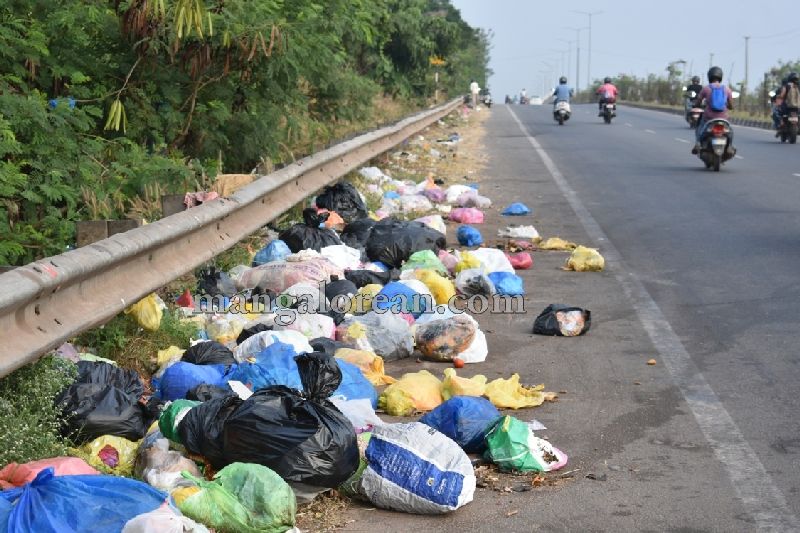 This ugly scene on the highway surely sends a bad image of India and also of the district to all the visitors from other countries who travel on this highway during their sightseeing tour. Despite the hype around the cleanliness drive after Prime Minister’s clarion call for Swaccha Bharath Abhiyan, filth is still visible on this national highway, and on other highways. With the dumping of garbage on both sides of the national highway at various locations, many a time people using the road are put to inconvenience by the stench that emanates from the garbage dumped indiscriminately. In spite of awareness on why the use of plastic should be avoided, people continue to use plastics. It forms a major chunk of the garbage dumped along the national highway. Even people have been dumping garbage from the Nethravathi Ullal bridge into the running river below, in spite of a sign posted nearby not to dump the garbage. But after our MLA Vedavyas Kamath decided to fence the Nethravati bridge, it has not only prevented people from jumping into the river to commit suicide but has also prevented waste from reaching the river below. (Ref:  ‘United Colours of Garbage Bags’ Don a New Look to Nethravati Bridge Fencing…)

Yes, we agree that the disposal of garbage continues to be a challenge faced by the civic authorities. Officials say that they alone can not keep the city clean. A change in attitude among people towards the issue of cleanliness is the need of the hour. In spite of many awareness programmes on ‘Swachh Bharath’ people have the habit of dumping garbage on the highways, streets and pavements. Adding to this, construction debris is also dumped. Also looking at the outgrown grass and other vegetation beside the highway it seems like Swachh Bharath Abhiyan is not clearing the garbage alone.

It’s time that our elected state representatives take quick action on this garbage menace on NH 66, and start cleaning up soon before the garbage piles up, and keep an eye on who is dumping the garbage and punish them if caught. I hope this report will awaken some of our “Beloved?” leaders, including MLA UT Khader, and the rest of the political and district administration/PWD/NHAI honchos to take action fast and do the needful. Thank You! (Ref: Haven of Garbage! United Colors of Waste Decor NH66 from Yekkur to Kannur)