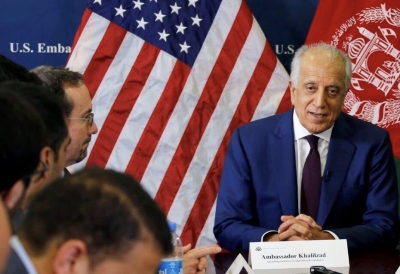 Islamabad:  US Special Representative for Afghanistan Reconciliation Zalmay Khalilzad has embarked on a trip to Pakistan ahead of the resumption of the peace talks between representatives of the Taliban and the Kabul government.

The meeting came ahead of the resumption of intra-Afghan negotiations in Qatar scheduled for Tuesday that will focus on reduction of violence and a ceasefire in conflict-stricken Afghanistan.

The Taliban and an Afghan government’s negotiating team had announced a three-week break last month for consultations with their leadership.

Besides Bajwa, the ISPR statement said that Khalilzad met other military leaders at the army’s headquarters in Rawalpindi and discussed matters of mutual interest including overall regional security situation with particular reference to ongoing Afghan reconciliation process.

“Both reaffirmed the commitment towards the common goal of peace and stability in the region and agreed on continued engagement at multiple levels,” the statement added.

The peace negotiations, which formally kick-off in September 2020, witnessed a breakthrough last month after the two sides agreed on procedural rules for the talks.

They also confirmed to have exchanged their lists about the agenda of the peace talks.

According to TOLO News, in its draft of demands, the Afghan government’s team has added ceasefire, preservation of national sovereignty, media freedom and the prohibition of activity by foreign fighters in the war-torn country.

Meanwhile, the Taliban’s demands include an Islamic government structure, establishment of an Islamic council, and ensuring women’s rights and the rights of all citizens based on Islamic principles.