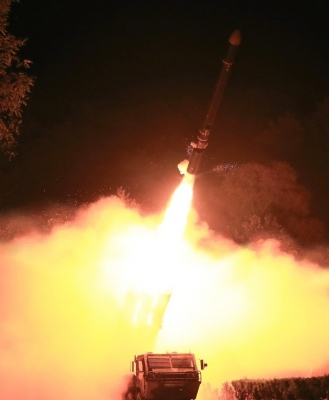 On Wednesday, the North fired two long-range strategic cruise missiles that flew for “10,234 seconds along an oval and pattern-8 flight orbits in the sky above the West Sea of Korea and clearly hit the target 2,000 km away”, Pyongyang’s official Korean Central News Agency (KCNA) said in a report.

The launches were conducted in order to further enhance the “combat efficiency and might” of the missiles deployed at the units of the Korean People’s Army for the operation of tactical nukes and reconfirm the reliability of the overall operational application system, Yonhap News Agency quoted the KCNA report as saying.

Kim expressed satisfaction over the “high reaction capabilities of our nuclear combat forces which proved again their full preparedness for actual war to bring the enemies under their control at a blow through the unconditional, mobile, precise and powerful counterstrike by any weapon system”, the KCNA said.

Kim also urged all efforts for the “endless and accelerating” development of the national nuclear combat armed forces.

Meanwhile, South Korea’s unification ministry urged the North to immediately cease its provocations and change its approach toward President Yoon Suk-yeol’s “audacious initiative” to help rebuild its economy in return for denuclearization steps.

North Korea has been ratcheting up tensions on the Korean Peninsula recently, with seven rounds of provocative ballistic missile launches in just two weeks.

The KCNA earlier reported that the North conducted an exercise of its tactical nuclear operation units from September 25 to October 9 in response to joint military exercises between South Korea and the US.