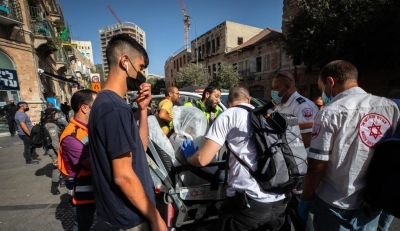 The assailant, identified as a 17-year-old from tHebron city in West Bank, arrived at the entrance of the central bus station in Jaffa St. and stabbed two shoppers on Monday, Xinhua news agency quoted Jerusalem District Commander Doron Turgeman as saying to reporters.

Border Police officers on a patrol noticed him and “opened fire and neutralised him”, Turgeman said.

They sustained moderate injuries and were evacuated to a hospital along with five other people suffering from the shock.

Video footage on Channel 12 TV news showed him lying on the ground surrounded by policemen.

The police showed a photo of a large kitchen knife used by the assailant.

Earlier on Monday, another attack was prevented in West Bank, according to a military spokesperson.

A Palestinian suspect arrived at the Gush Etzion Junction near a major Israeli settlement bloc south of Bethlehem city, and attempted to stab an Israeli soldier using a screwdriver, the spokesperson sadded.

The soldiers at the scene shot the assailant and he was taken to a hospital. No injuries were reported.

The violence came in the wake of a jailbreak by six Palestinian inmates from a maximum-security prison in northern Israel.

Four of them were captured over the weekend and the other two are still at large.

Measures taken in Israel’s prisons following the escape sparked a protest and a string of knife attacks in the West Bank and Jerusalem.

In addition, four rockets were fired from the Gaza Strip followed by Israeli airstrikes on the Palestinian enclave.