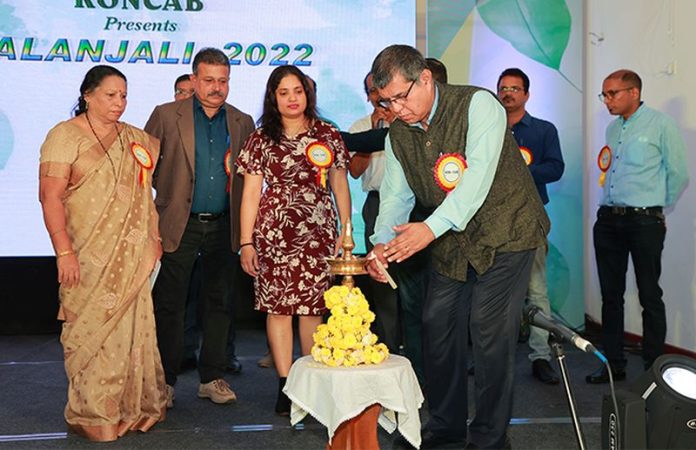 Bengaluru: Covid-19 had forced an unprecedented break for two years on Kalanjali – the annual talent show of All Konkani Catholic Associations of Bangalore which is hosted and organized by KON-CAB every year. The coveted talent show Kalanjali-2022 came alive this year with great pomp and splendour on Sunday, 6th November 2022, at the Konkan Samudai Bhavan hall in Bangalore. For more than 25 years KON-CAB has been organizing this event and providing a platform for all the members of Konkani Associations in Bangalore to promote the language and culture and to keep our history alive. 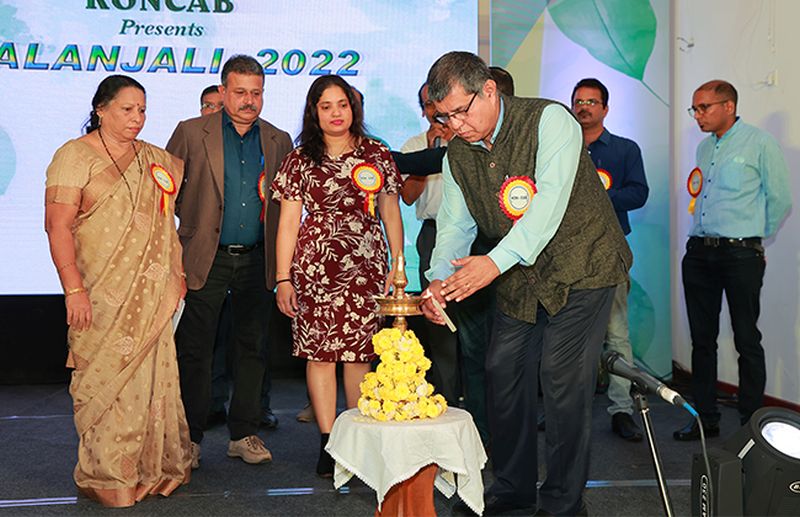 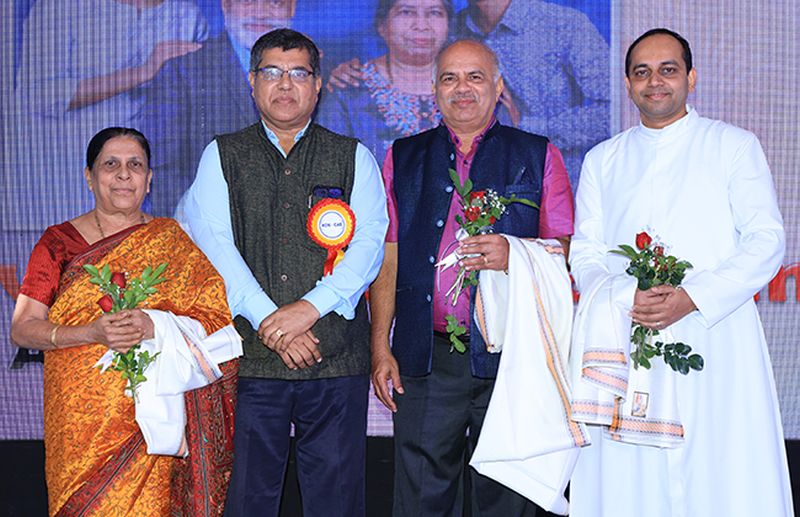 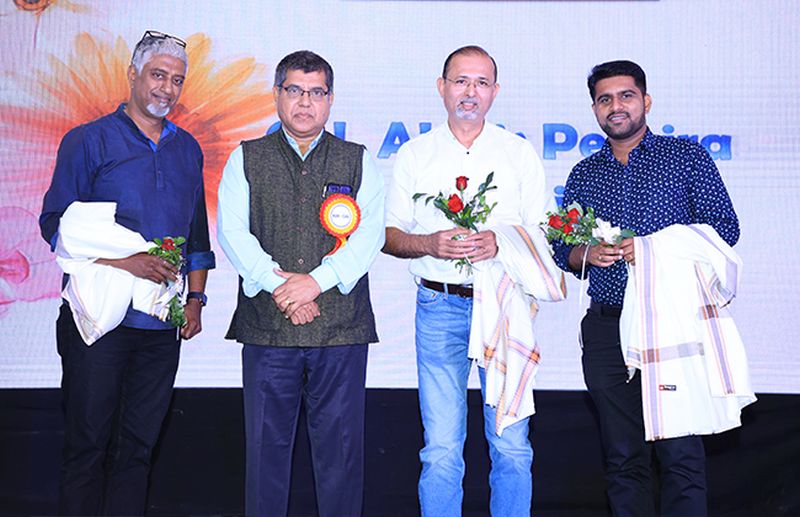 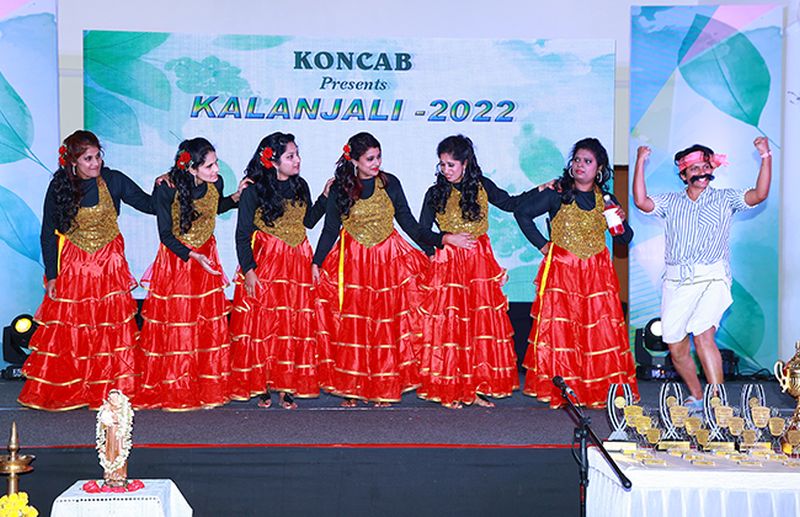 The program began at 10:15 a.m. with the emcee Neri D’Silva inviting the KON-CAB President, Secretary and the Executive Committee onto the stage. KON-CAB President Vincent D’Souza formally inaugurated the program by lighting the lamp, accompanied by secretary Navya Monteiro, vice president Nora Menezes, immediate past president Arun Fernandes and Cultural secretary Sunil D’Cunha. Jhonas D’Souza led the inaugural prayer to invoke God’s blessings for the success of the program and a pious prayer to St Anthony, the patron saint of KON-CAB. Following this, Kalanjali 2022 was declared open by the President.

The program started with Konkani solo singing competitions for various age groups. The delighted audience was taken to the nostalgic grand era of the immortal melodies of Konkan Kogul Late Wilfy Rebimbus, Lorna Cordeiro and other great Konkani musicians. There were some melodious numbers from the latest Konkani heartthrobs like Kevin Misquith and Prajoth D’Sa’s albums too. The Konkani Group Singing competition was a great hit among the audience, with great performances from the tiny tots and the elders dressed in amazing group uniforms and costumes. The group singing competition has certainly raised the bar to concert standards with Tenors, Baritones and Sopranos. 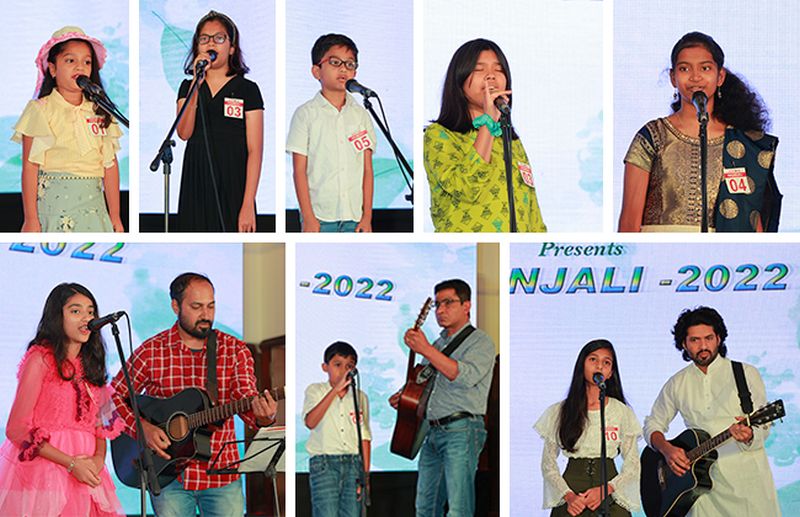 The next event was Fancy Dress Competition for various age groups, showcasing creative and innovative ideas, with nice make-up, interesting outfits and props, which entertained the audience thoroughly. Right from the tiny tots who could barely walk, up to the elderly participants, everyone displayed mesmerizing talents in the Fancy Dress competition.

Next in line was the short Konkani Comedy Skit competition which was enjoyed by the packed crowd in the auditorium. The witty dialogues and humorous acting by the competing performers left the audience in splits.

The final competition was the group dance for various age groups. It started with the young kids’ group including some tiny tots dancing to famous Bollywood and Hollywood tunes followed by the dashing dancers of 35 years and above age group who left the audience mesmerized as they performed to the Konkani songs which is mandatory criteria for this age group. The icing on the cake was the final dance competition for the youth group where the energy levels peaked and thrilled the cheering audience to the core in the packed auditorium. 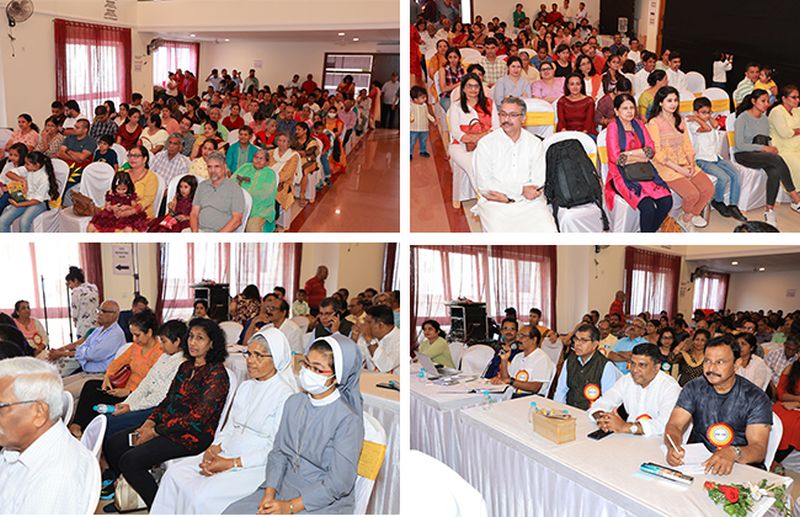 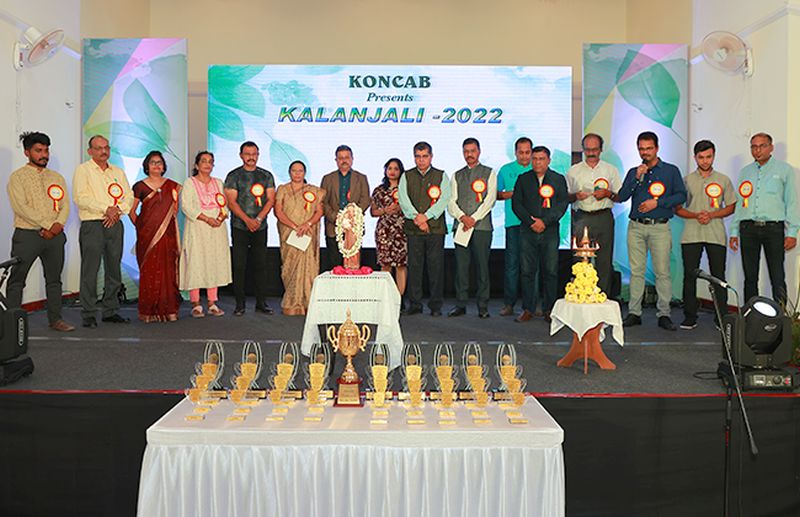 Kalanjali has been raising the bar every year. The fierce competition brings the best talent out from the Konkani Associations in Bangalore, and it is also a memorable entertainment to the audience who are left in awe by the performers. The judges have the toughest job to declare the winning individuals and groups among all the closely fought contests.

The competitions were judged by well-qualified and experienced judges, who are masters in their respective categories. The panel of judges included:

The audience was eagerly waiting for the final leg of the event which is the stage program presided over by the KON-CAB President. The Chief Guest for Kalanjali-2022 was Roshan Menezes, a well-known educationist, and Administrator of Carmel High School, Basaveshwaranagar. KON-CAB President Vincent D’Souza escorted the Chief Guest to the dais. The Guest of Honour Mr Silvian Noronha – Chairman of FKCA and a well-known entrepreneur, was escorted to the dais by KON-CAB Secretary Navya Monteiro. The Presidents of all Konkani Associations of Bangalore were welcomed to the dais by KON-CAB Cultural Secretary Sunil D’Cunha. KON-CAB President Vincent D’Souza honoured the Chief Guest and the Guest of Honour and all the Presidents of Konkani Catholic Associations of Bangalore, present on the dais. 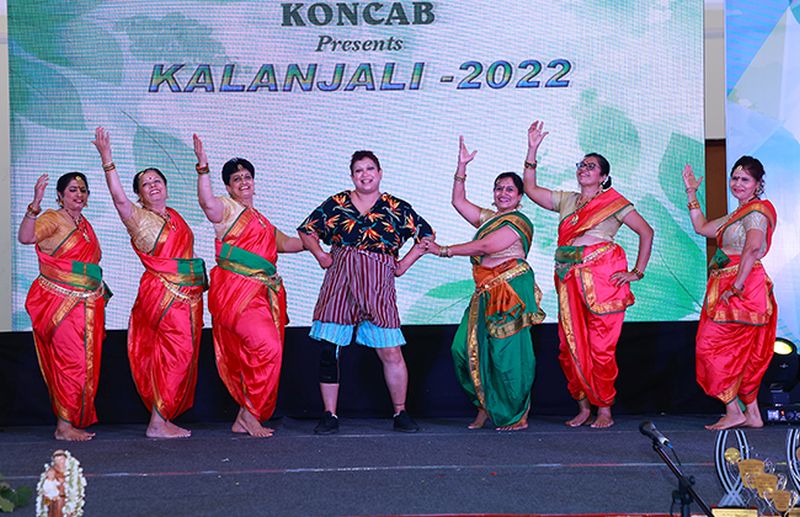 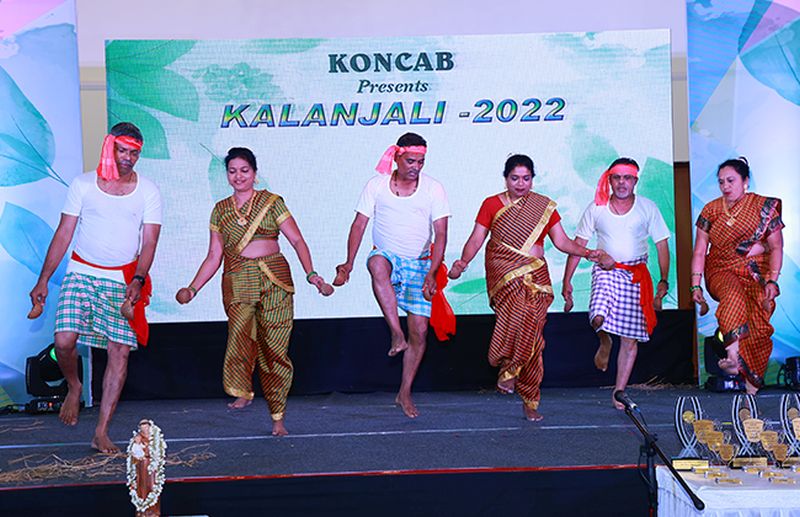 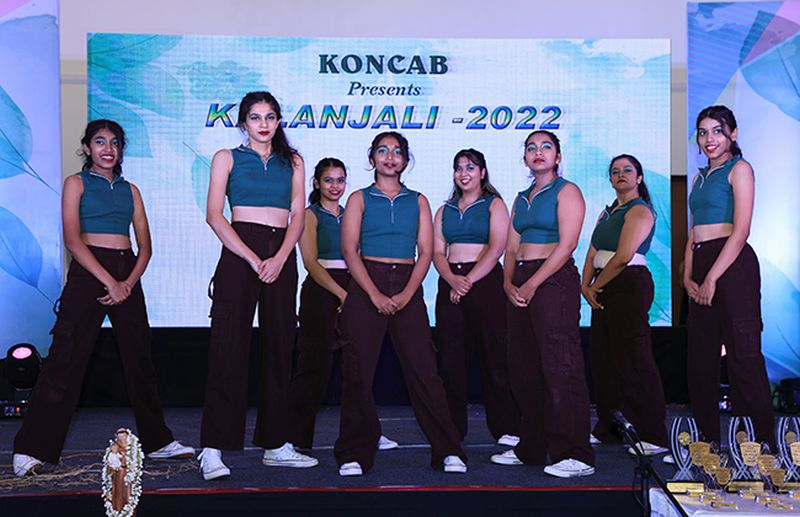 The Chief Guest Roshan Menezes, in his speech, lauded the efforts of KON-CAB in arranging such a mega event, for the past 25+ years. He recalled fond memories of his younger days when he used to participate as a competitor and how the program has evolved over the years as a prestigious platform to showcase talents. He encouraged the Konkani community members to make use of this platform to identify and showcase the hidden talents which go unnoticed if not explored.

The Guest of Honour acknowledged the hard work put in by the KON-CAB team in organizing this mega event every year and thanked KON-CAB President and the entire Executive Committee for the wholehearted support received from KON-CAB in all FKCA activities.

KON-CAB President Vincent D’Souza spoke about the challenges post the Covid-19 pandemic, in mobilising the various Konkani Associations of Bangalore and their members as the entire dynamics have changed for work, location, work-life balance etc. He thanked all the Association Presidents and office bearers for their whole-hearted support to make this event a grand success.

Then he accompanied the Chief Guest and Guest of Honour to felicitate the wards of KON-CAB members who had excelled in academics, sports and arts. The recipients of the Excellence Award are:

Finally, it was time for the anxiously awaited Prize distribution. The Chief Guest, Guest of Honour, KON-CAB President, Secretary, Cultural Secretary and the Presidents of all Konkani Associations present on the dais distributed the prizes to the winners of the cultural competitions as the winners’ names were called out.

There was stiff competition for the “Most Talented Team” rolling trophy. New entrants Konkani Kutamb Bansawadi were placed third in the points table. Konkani Samudai Jayanagar did very well in singing events and was leading in the points table halfway through the competition. In the end, they had to be content with the second place as the host KON-CAB team won the rolling trophy bagging the highest points by climbing the podium in many group events.

The program was compeered by Neri D’Silva with support from Navya Monteiro, Arun Sequeira, Mable D’Cunha and Jhonas D’Souza.

KON-CAB Secretary, Navya Monteiro proposed the vote of thanks and thanked everyone for their support and cooperation, as the daylong competitions with loads of entertainment came to an end with a promise to come back next year with the next edition of Kalanjali.

The Winners of the various categories held at Kalanjali 2022 are as follows:

Fancy Dress Solo up to UKG:

Fancy Dress Solo College and above: