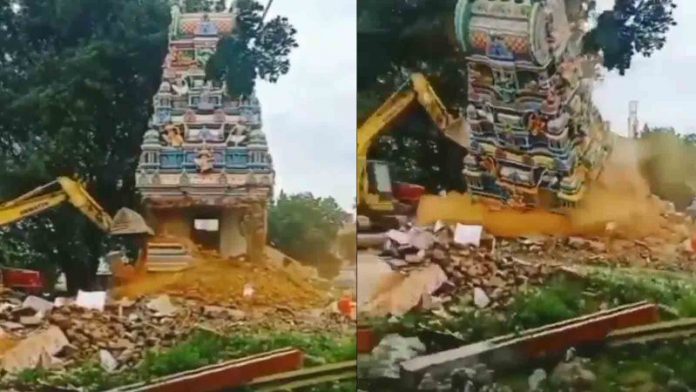 Bengaluru: The opposition parties, Congress and JD(S) in Karnataka are all set to launch a high-voltage attack on the ruling BJP on Wednesday, both in the Assembly as well as the House of the Council.

The opposition is determined to rake up the temple demolition issues in both the Houses as the ruling BJP is in a fix over the issue on the backdrop of the Supreme Court orders to clear religious structures built in public places.

Opposition parties are chiding the ruling BJP on the issue as the party always comes to the forefront whenever matters of the Hindus come to the fore. Now that the state government is all set to demolish 2,989 illegal religious structures, most of them are temples and other Hindu religious centres, the BJP is compelled to do firefighting as the pro-Hindu outfits and its own leaders are criticising the move.

The Congress has lodged a complaint with the Mysuru District Commissioner against BJP MP Pratap Simha, who stated he wouldn’t listen to anyone when it comes to the matter of religion.

Basavaraj Bommai, the Chief Minister has ordered to stop the demolition of temples for two days and he stated that the guidelines will be released after studying the Supreme Court order.

Opposition leader Siddaramaiah is known for his poignant verbal attacks on the BJP and Congress state chief D.K. Shivakumar is also training guns on the issue of inflation of daily commodities and fuel.

On the first day of the session, the Congress leaders arrived at the Vidhana Soudha in bullock carts to protest against the fuel price hike.