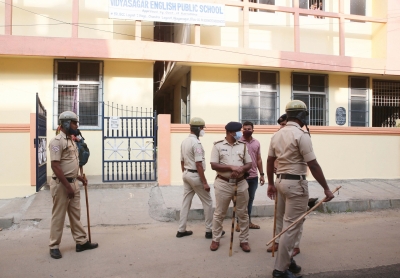 Bengaluru: A complaint has been lodged against the inspector attached to High Grounds police station in Bengaluru, for arresting an elderly lady in the evening in connection with a property issue, but in the absence of lady cops.

The complaint was submitted to the Chief Justice of Karnataka High Court and Bengaluru Police Commissioner Pratap Reddy on Friday, by Advocate Samad Khan.

“The court has issued a stay order in a property dispute case. In spite of the order, inspector Shiva Swamy arrested Mary Elizabeth in the evening and took her to the police station. This is done in the absence of lady cops violating all guidelines,” Samad Khan alleged in his complaint.

Complainant Samad Khan has urged to initiate action against the police inspector. Mary Elizabeth owns property in upscale Cunningham Road and the property dispute is in court. Despite the stay order from the court, the inspector is interfering in the dispute, he mentioned in the complaint.

“The police are interfering with property issues violating the Supreme Court guidelines in this regard,” the complaint said.