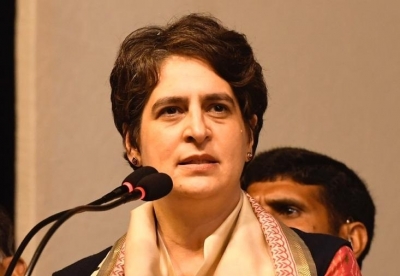 K’taka: Cong planning to rope in Priyanka for Bellary convention

Bengaluru: The Congress party in Karnataka buoyed by the response of the party’s ongoing Bharat Jodo Yatra led by Rahul Gandhi is planning to rope in another Gandhi family member — Priyanka Gandhi Vadra, for its Bellary convention.

Sources in Congress said the party leaders are upbeat about the grand old party’s prospect in the upcoming assembly elections.

The Congress had come to power in the 2013 assembly elections after holding a massive convention in Bellary against the mining mafia and then the ruling BJP government.

The Congress managed to garner a simple majority in the elections and Siddaramaiah went on to become the Chief Minister.

The Congress leaders believe if Priyanka Gandhi joins padayatra in Ballary district and addresses the convention there, it would help boost the party’s chances in the central as well as the northern Karnataka region.

‘Bharat Jodo Yatra’ will cover a total distance of 511 km across 21 days in Karnataka covering eight districts. The only public rally in the state as part of the yatra will be organised in Bellary.

The party is trying to bring in over lakh people for the rally.

Party insiders say that Rahul Gandhi was keen on including Ballary in the route of the Bharat Jodo Yatra.

The yatra is scheduled to reach Ballary on October 19.

The convention is organised on the next day.

Bellary is also special to the Gandhi family as it had given a major boost to Sonia Gandhi’s political career when she contested from here against BJP’s late former union minister Sushma Swaraj.