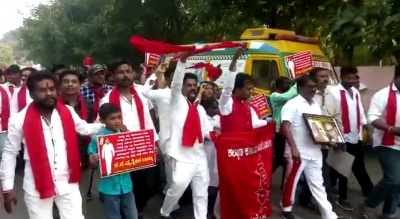 Kalaburagi:  Voices of dissent emanated on the occasion of the celebration of the Kannada Rajyotsava (Karnataka Formation Day) on Tuesday in the state.

Karnataka Police arrested 20 people in Kalaburagi city while attempting to hoist a separate flag demanding statehood for the Kalyan-Karnataka region, which was earlier known as the Hyderabad-Karnataka region.

The agitators demanded that Kalyan-Karnataka region has been neglected and the successive state governments have given a step-motherly treatment.

The agitation was organised by the Kalyan Karnataka Separate State Agitation Committee. and was led by the committee President S. Patil. For a long time, the people have been demanding separate statehood for the region comprising Bidar, Kalaburagi, Yadgir, Raichur, Koppal, Ballary and Vijaynagar districts.

The police arrested the agitators when they took out a march holding banners demanding separate state and attempted to hoist Kalyan Karnataka flag at the Sardar Vallabh Bhai Circle in Kalaburagi.

There is tight security in the city and other districts of the region. The Karnataka government has established the Kalyan Karnataka Regional Development Board (KKRDB) and also got the special status conferred to the region under Article 371 (J) of the constitution.

However, the agitators claim that nothing has changed in the region and only separate statehood ensures the development. They also maintained that the region was deliberately neglected and politicians from southern Karnataka dominate the scenario.

They also alleged that the state has failed to implement Article 371 (J). The districts of Kalyan Karnataka region are the most backward districts in the state economically and socially.