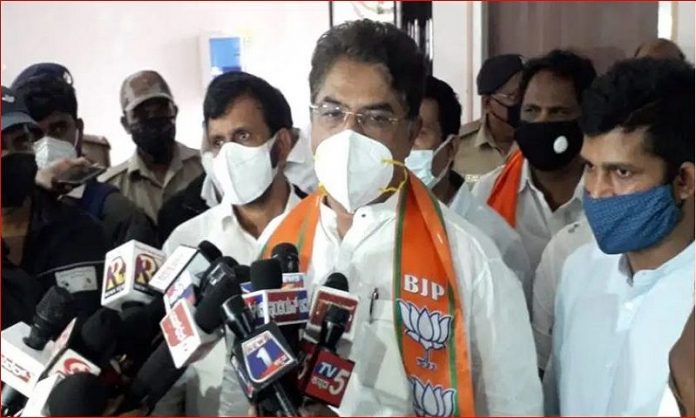 Mysuru (Karnataka): Karnataka Revenue Minister R. Ashoka said on Wednesday that the Deputy Commissioner of Mandya will be asked to constitute a committee of experts to look into complaints of ‘cracks developing in the state’s iconic Krishna Raja Sagara (KRS) dam that was built across the Cauvery river in Srirangapatna in Mandya about a century ago.

This statement assumes significance in the backdrop of Mandya MP Sumalata Ambreesh relentlessly accusing that ‘rampant illegal mining’ in the vicinity of the KRS dam has resulted in cracks in the almost century-old dam built in 1924.
Ashoka, who is also the Vice-Chairman for the Karnataka State Disaster Management Authority, told reporters here that as of now, there is no threat to the dam whatsoever.

“Allegations are doing the rounds that illegal mining in the vicinity of the dam is a cause of serious concern, which is being raised by some (Mandya MP Sumalatha Ambareesh). We are seriously looking into these allegations. We are not taking anyone’s side on this issue. Our job is to allay fears of thousands of farmers who rely on this dam,” he said.

In response to a question, the minister said that if there is any threat from any mining activity to the dam, the state government will not hesitate to shut it down even if it’s a legal mine.

Ashoka said that he was on a tour of Mysuru and Mandya districts exclusively to convene meetings with regard to the safety of the KRS dam.

“Already, dam safety experts have given a report ruling out any cracks or breach or any damage to the structure of the dam. But since ‘some people’ are expressing concern, we will set up another committee to look into these allegations. The state government wants to clear the air once and for all,” he said.

He added that there is nothing to hide in this issue as any breach or crack in the century-old structure will trigger panic in various quarters.

“We need to keep that in mind. Therefore, we are setting up another panel to look into the matter, just to allay the fears of the farmers and various other stakeholders,” he said.