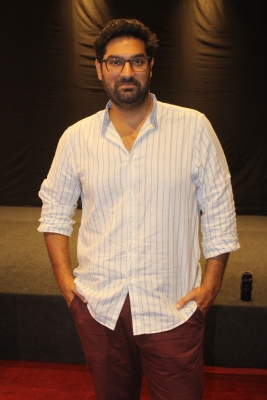 Kunaal Roy Kapur on getting Hindi diction right in ‘Tribhanga’

Mumbai: Actor Kunaal Roy Kapur says he had to work extensively to ensure that he gets his Hindi diction right in upcoming digital film Tribhanga: Tedhi Medhi Crazy.

He plays Milan, a videographer, tracing the journey of Nayan, a critically acclaimed Marathi litterateur played by Tanvi Azmi, who is unable to write an autobiography. The film, written and directed by Renuka Shahane, also stars Kajol and Mithila Palkar.

“When I found out that my character is going to speak in ‘shudh’ Hindi, I was amazed that she believed I could do it. For the character I had to work on my diction and ensure that I don’t have any interjections in English,” Kunaal said while talking about his preparations to get his Hindi diction right.

“We usually have a tendency to speak ‘Bambaiya’ Hindi where you throw in a few English words but this character was very different and couldn’t do that. This role was very challenging for me and I spent many hours just going over the lines multiple times,” he added.

The actor continued: “This was a very different experience for me even from the preparation perspective because I am not someone who prepares so extensively that I did for this role. To get my diction right – I used to read my lines aloud, record it and hear it, I also did a couple of tongue exercises and spoke with a pencil in my mouth and tried to say the Hindi words which I have not said before as it helped me. I also tried writing some of my lines in Devanagari because when you write it in English your pronunciation can go another way but that doesn’t happen with Devanagari.”

Tribhanga: Tedhi Medhi Crazy deals with the lives of the three female characters and their unconventional life choices. The film releases on Netflix on January 15.